Dance review: Thomas Woodman, A dead-end in itself

An exploration into our ceaseless fixation with mass media channels.
Sarah Liversidge 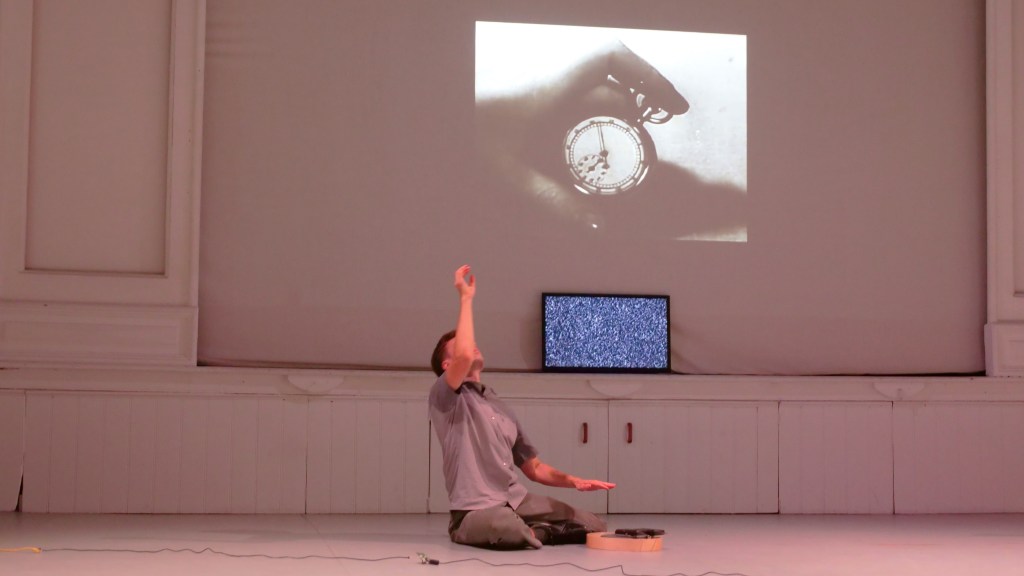 ‘Perhaps it is simply impossible for us to make sense of the onslaught of information hurled at us in this lifetime.’ Photo by Emma Riches.

How do we make sense of the endless stream of information thrust upon us every day? I don’t have the answer to this and neither does Thomas Woodman, whose performance A dead-end in itself contemplates this very question. The piece, choregraphed and performed by Woodman, was the first in a triple-bill of new solo works at South Melbourne’s Temperance Hall on Friday 8 April.

The piece sets out to explore themes of media fixation and the proliferation of sources of information which seem to constantly reproduce and reform, generating confusion and anxiety. Woodman summoned Chris Burden’s Poem for L.A., performed in 1975 as a TV advertisement, in which Burden solemnly repeated the words: ‘Science has failed / Heat is life / Time kills’. These three elements are examined, played with, and tossed aside in a captivatingly frantic multi-sensory execution.

The piece opened with a pile of tangled electrical cords and power boards that Woodman began to feverishly, but somewhat methodically, untangle and rearrange. A small TV screen in the back of the room remained static. Behind this, a projection played a mash-up of clips predominantly from the 1980s, covering themes of science, pseudo-science, talk shows, Simpsons episodes, and Burden’s ad. All these elements worked together to maintain a jarring atmosphere that did not ease up for the duration of the performance.

Woodman was dressed casually in cargo pants and an 80s style polo shirt. Low, understated lighting drew the viewer’s eye to the TV screen as a kind of punctum. The soundtrack was the constant TV mash-up. At one point an old Macintosh ad featuring the music from Chariots of Fire broke through the persistent dialogue. Visual clips about an artificial heart that prolongs life alluded to a Frankenstein-like narrative.

Woodman moved spasmodically across the floor pushing, pulling, crawling, jerking, skipping and shuffling. He performed repetitive motions involving different objects as he tried, sometimes cautiously, sometimes hastily, to make meaning from the resources at hand. He carefully rolled a clock back and forth across the stage giving the impression that this object is of great importance. Woodman uncoiled onto his back on the floor, spinning the clock around and around, first on his knees, then above his head, before it settled over his face. There he stayed, exhausted, barely moving.

Perhaps it is simply impossible for us to make sense of the onslaught of information hurled at us in this lifetime. In the end, time wins.

A Dead-End in itself by Thomas Woodward
Temperance Hall, South Melbourne

A Dead-end in itself was performed from 7-9 April 2022 as part of Triple Bill Solo Works, co-curated by Temperance Hall Artistic Director Phillip Adams and Artistic Associate Luke George