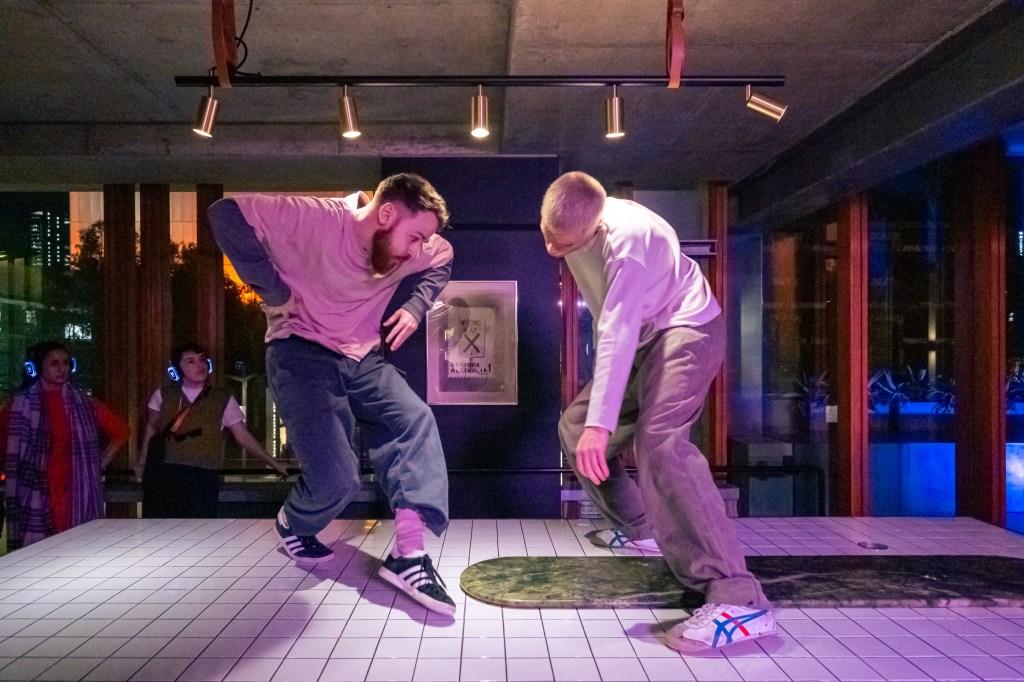 SITU-8, also known as IN-SITU in previous years, has, since 2014, grown to be one of the coolest little seasons of contemporary dance in Perth – hands-down.

After seven years of going strong it still delights and surprises to see how young dance makers and composers can respond to new spaces, and be reminded that great performance can happen anywhere if it’s in the right hands.

Of the four works presented this year it’s near impossible to draw a common thread. The spaces they take over within the hip, inner-city Alex Hotel are diverse. They include a bar table, a lounge space, a bedroom, and a roof top balcony. The cast sizes and concepts are also huge in range, making each work deserving of its own story.

Sadly, this review will only scratch the surface, but here are some choice moments:

Choreographer Mitchell Aldridge and composer Azariah Felton’s opening piece feels alive in every way. As we stand around a high, white-tiled table top, our headphones play Felton’s immersive electronic score, and the work’s six performers start to motion to the beats. Their gestural movements pulse around the table, then some of them break away and climb on top. As they bend and slide through the air Felton’s music swirls through our bodies. The room’s energy surges and the dancers hone their rapid moves. In the end it proves a wonderful ensemble work that cleverly uses every inch of its space to create a nuanced and compelling ride.

Next we move to the lounge space, where the temperate drops. We see three denim-clad zombie-like figures with hidden faces – heads wrapped in silky white scarves – and they rumble to life. Performers Celina Hage, Georgia Van Gils and Luther Wilson emerge as these characters from all corners of the room to composers Stephen de Filippo and Kane Tenadii-Hay’s clinking rhythmic sound score (a piece the artists made by recording ambient sounds in the Alex Hotel in the lead-up to the season – and it’s brilliant). Overall, this work points to ideas of dislocation and isolation. These bodies are physically here, touching and connecting before our eyes, but it makes one ponder their presence of mind and soul.

A visual allusion to surrealist painter Rene Magritte’s famous work The Lovers also comes to mind, as these shrouded heads and uniformed bodies continue to slip past us. It’s macabre, but never dull, at least not until a brief moment just before the end, when an extended sequence of bodies in slow motion feels a little too long.

The third work, Room 207, by Rhiana Katz and composer Rachael Dease, changes direction again. This work is perhaps the most difficult architecturally, being presented in various hotel bedrooms where only seven audience members can fit. There is little space left for the dancers to move and they use the central double bed as their stage. As they tussle and fall on its springy surface, weighty emotions are tunneled into view. As couples and singles move in and out of these rooms, their despairs are palpable and disturbingly infectious.

It’s therefore a relief to be let out of these spaces and be guided up to the rooftop for the show’s final work. Entitled Disclaimer, by May Greenberg and composer Felicity Groom, the only forewarning we’re given in the program notes is that this piece will be ‘a debacle’. It lives up to its name in spectacularly crowd-pleasing ways. It’s an enormously fun and very clever finale treat.

Its comedy begins as we watch four male performers, moving like retro-funk gangsters, from outside their huge ‘office’ window. We peer in at them toughing it out through numerous decisions and deals, as performers Sam Coren, Scott Galbraith, Macon Riley and Zachary Wilson show us what male virility means in 2021. They smash through hilarious scenes of try-hard one upmanship in grandiose style. Yet, behind its melodramatic pomp and flair lies Greenberg’s sophisticated and thoughtful direction. Greenberg is an artist who know how to use improvisation and authorship together for poignant effect, and when this surfaces in Disclaimer it’s both funny and profound.

Overall, this season shows the vibrancy of WA’s independent performance scene, and emphasises what a gift it is to enjoy live performance right now – when so much of the country is locked-down. We’ve been very lucky to have had SITU-8 in Perth this year. Let’s hope this season’s luck (and its strength and talent) continues well into the future.