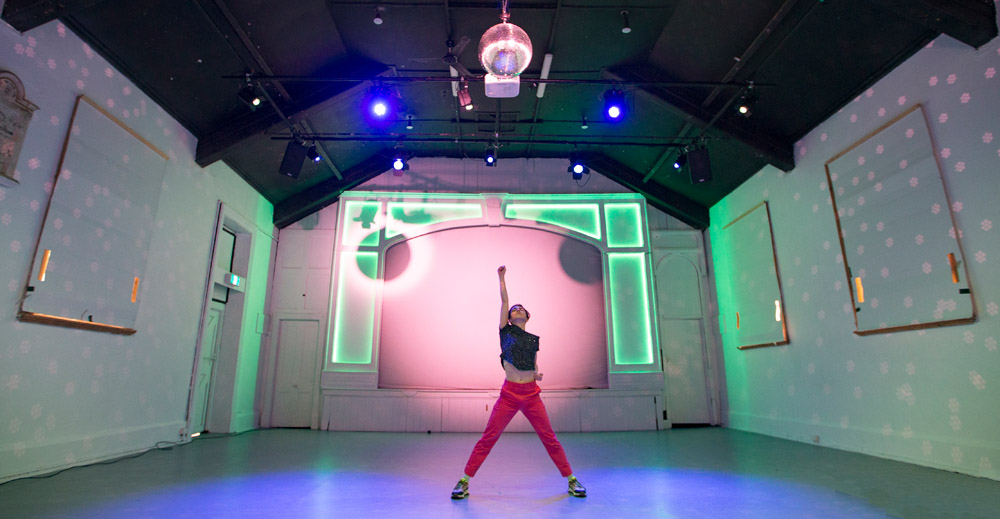 ‘Throughout, Lauritz made artful use of tempo and cinematic effects in the dancing, emulating slow motion.’ Photo by James Lauritz.

A wild cabaret of stand-up comedy and 90s boy-band style lip-synched dance moves, Pia Lauritz’s Billy Soy Boy was a hoot, and a technically skilled, comically timed one at that. The lights went up and Billy sashayed onto the stage under a spinning disco ball, strip neon lights flashing along to the intentionally mawkish pop soundtrack. Lauritz’ oozy extensions, moon-walking, hair flicks and Matrix-like bouncing off the walls punctuated the high energy music and drew the audience in to the tragicomic world of Billy Soy.

The soliloquising between songs made me wonder if I was accidentally at a Melbourne Comedy Festival show— as Billy made self-consciously hilarious gags about failed dates, about wearing a crown made of Soy Boy cartons and about pouring himself a generous glass of soy milk. Billy’s exceedingly cliché quips, such as ‘manifest your power’ and ‘do the work… save the world’ were comically coupled with props, such as a globe gym ball which was deflated, patched with Elastoplast and thrown to the audience. They were well-timed slapstick elements that raised a laugh in many directions. Throughout, Lauritz made artful use of tempo and cinematic effects in the dancing, emulating slow motion, the close-up (dramatically raising her eyes to the audience) and sequences in reverse. The climax of the performance was when she sloped downstage to open her printed shirt (buttons went flying!) to reveal a t-shirt touting the slogan ‘Don’t be a dick!’ underneath. The timing, just before the announcement of the next election, was prime. If there was a moral of the performance; this was surely it.

Her movements and staging, from the comic side-swing and click of her arms, to throwing her jacket downstage, brimmed with dramatic irony. The lines between pretence and authenticity were cleverly played with; between performance and honesty; between expectation and reality. An engrossing and provocative piece.