All the creative forces join to ensure power and sublimity in this dance interpretation of a classic novel.
Leila Lois 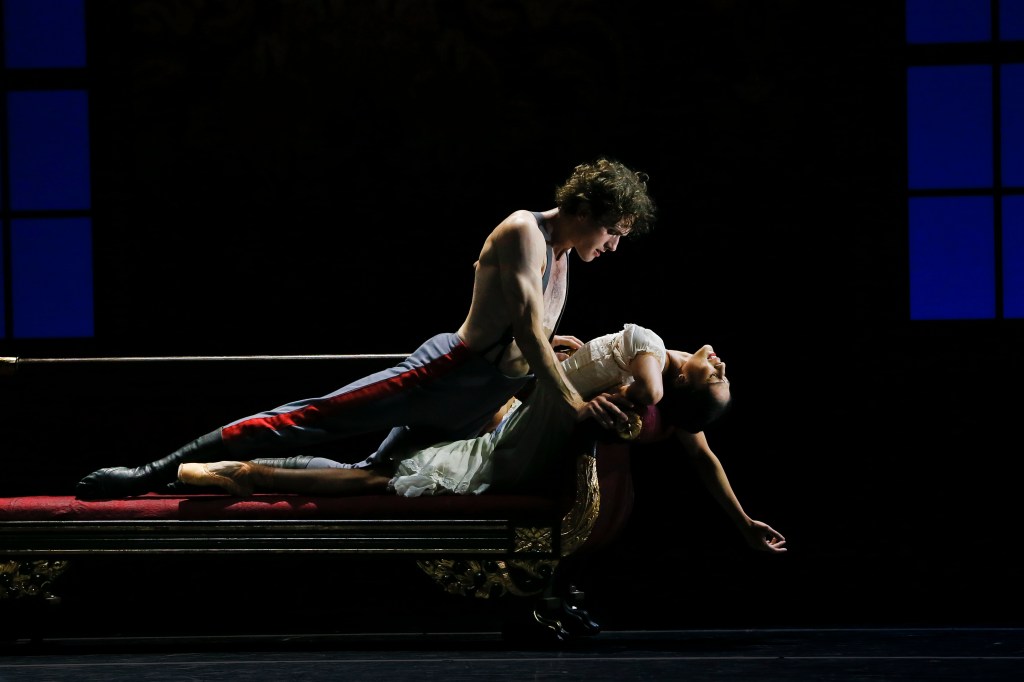 ‘The sprawling pas de deux across a velvet chaise longue’ between Callum Linnae and Robyn Henricks. Photo by Jeff Busby

All the variety, all the charm, all the beauty of life is made up of light and shadow.
~ Anna Karenina, Leo Tolstoy

‘Sometimes good things come to those who wait’, announced David Hallberg, Artistic Director of The Australian Ballet, before the opening night of this highly anticipated, twice-cancelled show. This was an understatement, as what we witnessed was stunning, resounding with the beauty and tragedy that ballet as an art form so perfects.

As if to brace audiences for the emotional turmoil to follow, Hallberg prefaced the performance with ‘the curtain opens to love, tragedy, betrayal and death.’ Tolstoy’s literary magnum opus – as we know – is not for the faint-hearted. This balletic interpretation, by renowned Ukrainian-born choreographer Yuri Possokhov, who danced with the Bolshoi and choreographed for San Francisco Ballet, was remounted by guest repetiteurs Adam Blyde and Suzanne Lopez from Rambert Dance Company and Joffrey Ballet respectively. A significant crème de la crème selection of compositional talent was drawn upon for the production, including composer Ilya Demutsky, costume and set designer, Tom Pye, lighting designer David Finn, projection designer Finn Ross and a mezzo soprano (Jacqueline Dark on opening night). All of this is important to mention because the world of the ballet was made so consuming and exceptionally beautiful by the meeting of all these corollaries.

It was almost mesmerisingly seamless how costuming, lighting, sound and drama compelled the attention over a turbulent two and half hours. One moment where this symbiosis was most clear was during Anna’s death scene, where wind blows her hair and nightgown; stage smoke unfurling as her enormous shadow is projected, a train horn sounding while her arms flail in dramatic tableau. A heart-stopping moment of dramaturgy at its finest.

Anna Karenina is not, as Hallberg said in a rehearsal video, a ‘classical’ ballet yet holds fast to ballet technique and rigour. Many of the stylised movements have contemporary flair; Anna (danced by Robyn Hendricks) oscillates throughout between fluidity to rigidity, describing her character’s entrapment in the play of desire and the crushing weight of expectation. The range of emotional expression in each turn and lift with her lover Vronsky (danced by Callum Linnane) was extraordinarily touching as she portrayed a woman who went ‘to the limits of her longing’. Hendricks became Anna, with all her torment in a rare embodied way that could stir even the most taciturn heart.

Vronsky was lithe and athletic to the nth degree and you could really feel the frisson between the lovers. The sprawling pas de deux across a velvet chaise longue, Hendricks in gossamer-like négligée and Linnae in breeches and braces was enough to leave you tingling. From forceful tug of war to limp-limbed ecstasy, the virtuosity and connection of the two dancers shone. Adam Bull also shone as Anna’s overbearing husband, depicting a derelict man trying fiercely to save face. Benedicte Bemet was gorgeously light as the capricious Kitty, her ditsy floral gown and winged-feet fairness in contrast with Hendricks’s heavy wine-dark gown and imposingly elegant stature.

In times of tumult, confusion and great tragedy, seen across global events the past three years but especially with regards to the devastating invasion of Ukraine this past week, it was hard not to feel a heaviness as well as triumph watching this exquisite ballet. Anna Karenina was a quite simply sublime piece of theatre that has the power, like the book it was adapted from, to resonate at a deep level and disquiet us long after the performance has ended.

Anna Karenina will be performed until 9 March 2022 at the Arts Centre, Melbourne before touring to Sydney from 5-23 April. It will also be livestreamed on 8 March.