Ben Kochan is obviously a comedy lover and observer of the odd – naming his show for an audience member’s fumble in Penn and Teller: Fool Us – but this has made him unsure which comedy he’s actually practicing in his latest show.
George Dunford 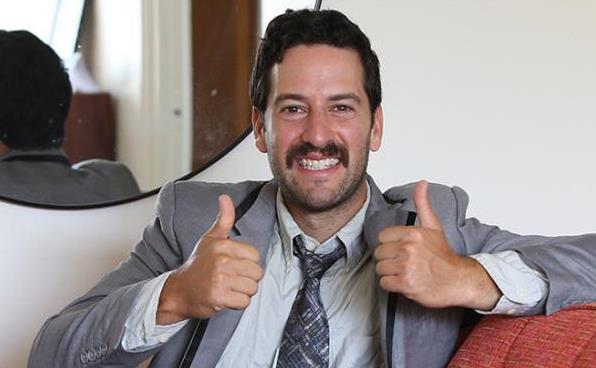 Ben Kochan gives it the double thumbs up. Image supplied.

At his best Kochan does silly, well. He opens with a surreal sight gag and later has a kooky soundtrack for his lip balm break, but the bits that fall in between are inconsistent. He tries to pre-empt audience disappointment too much – at one point orchestrating heckling by asking someone to shout out ‘you suck’ so he can respond with ‘your dick’. It might have worked if it had been impromptu but was not worth the set-up. When a gag falls flat he tells the audience that it worked better yesterday and enacts last night’s audience. Again it was a fun idea but repetitious and dragged out too long.

The sources of comedic material are predictable – an Uber driver, his slightly confused mother, a girlfriend who only serves as a way to talk about sex. There’s a mildly funny observation about getting asked to do dirty talk but finding he nervously gives silly rather than sexy. A great idea that could have been given some more time to breath but Kochan jumps to talking about the kind of lingerie men should wear. The show had the feel of shifting around looking for what the audience wants rather than Kochan offering material that represent him. Consequently he jumps from story to prop comedy to one-liners as if looking for something that will work. Shifting gears like this might have worked when Kochan MC’d Comedy Zone in 2019, but here it feels like he’s not committed to his own material.

His 2019 debut solo show, Nice Boy Seeks Kind Audience, is a good indication of Kochan’s niche and he still tries to hit that sweet spot of nerdishness and embarrassment a few times. However it is at odds with the way he presents – confident even in his Borat-esque vintage suit or wearing a goofy hat. Aiming to break out of his nice guy material, Kochan opts for bad taste with jokes about his grandmother’s breast implants or why he wants racist stereotypes to be more original. Not only is such material dated, it feels like Kochan is trying to live up to a macho comedian image – trading barbs about sex and race for weak chuckles. Jokes about happy endings in brothels that rely on Kochan being naïvely hopeful are out of step with 2021.

The show felt overly long with Kochan awkwardly missing the moment with many gags and going through an onstage identity crisis as a comedian. At one point he shrugs off a lack of laughter saying he bought a dud gag on Gumtree. Hopefully they accept returns on faulty goods.