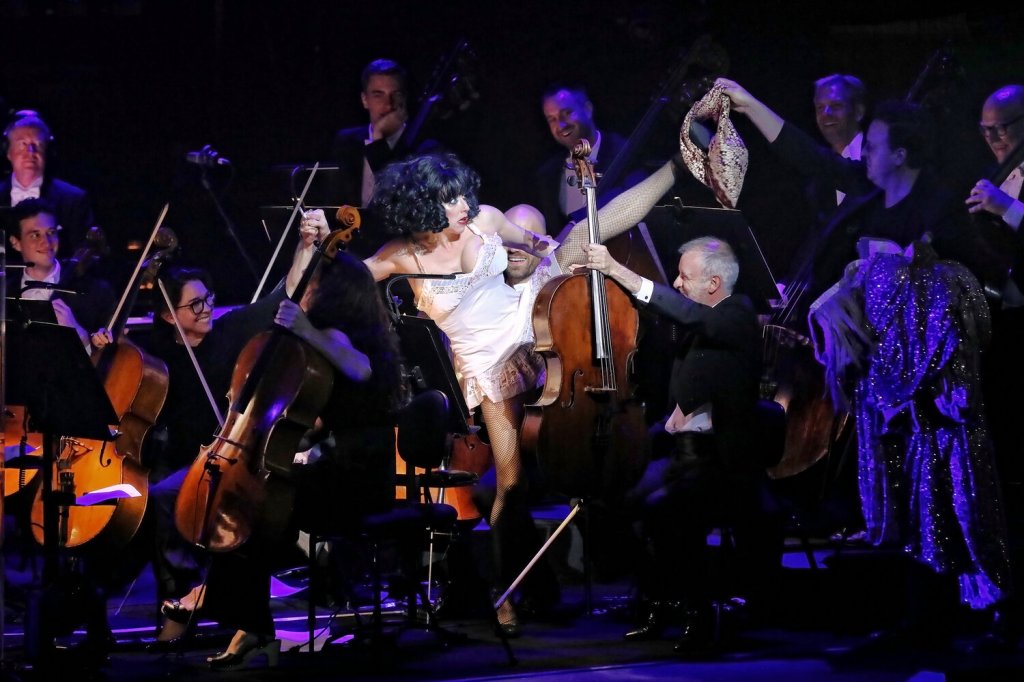 From the back rooms of Berlin to the opium dens of Shanghai, the ‘international singing sensation’ Meow Meow has created something wonderfully and uniquely her own in Pandemonium. The show is, as it says in the promos, ‘full orchestrated chaos’ and on this front it does not disappoint.

Performing with the Adelaide Symphony Orchestra under the always-charming conductor Nicholas Buc, and three guest musicians, Meow Meow has the audience enthralled from the moment she appears. And what an entrance! (I won’t spoil it for you, but it is original and very funny).

Meow Meow’s Pandemonium may have its roots firmly in the best traditions of Weimar Cabaret and French Chanson, but she gives it a sexy and comedic spin that is all her own. Meow Meow is gorgeous; she has legs that go on forever, she really can sing with an impressive vocal range, and she has entrancing stage presence. She also has eyes that would make a drag queen jealous and a smile that could seduce the hardest heart. There is no doubt about who owns the stage, and that is a wonderful quality in a cabaret performer.

Meow Meow is the stage persona of Australian cabaret artist Melissa Madden Gray, a WAAPA graduate who also studied Fine Arts and German at Melbourne University. When she says ‘schnéll’, you can hear the perfect Germanic tones. And as she says, ‘everyone does what they’re told when you say it in German’.

Meow Meow has adopted a perfect cut-glass voice that gives her more than a touch of a naughty aristocrat infused with the spirit of Sally Bowles. There are some wonderful songs from the French and German repertoire, but also more modern highlights with a couple of her own songs, written with Thomas Lauderdale of Pink Martini fame.

And it wouldn’t be cabaret without the excruciatingly embarrassing, but immensely funny, audience participation. These poor souls get to undress her on stage, stroke her legs (from the knee down only!), and rather perilously lift her up and over the stage. ‘Don’t worry if a bosom falls out, just pop it back in…’ she instructs the audience. These may be unrehearsed with each batch of audience volunteers but are well-oiled stunts that have featured in the various iterations of Pandemonium that Meow Meow has been touring for a few years now.

Meow Meow works hard to create an air of chaos – pandemonium, if you will – but the precise timing of these routines is paramount. The pandemonium is very much stage managed and every movement well planned. The improvised revolve on the stage of the recently renovated Her Majesty’s Theatre was a joy to behold. Most of the comedy is in the mood of the old British sit-com Allo ‘Allo! and seems remarkably innocent in these days when so much comedy is woke.

Meow Meow was accompanied on stage by Mark Jones on piano, Ben Hanlon on double bass, and Alon Ilsar on drums, along with the ASO. It was fun to see the players of the ASO clearly relishing this more relaxed style of performance. They had their moment to shine as they all strode across the stage at the beginning of Act 2 to take an individual bow, and were remarkably inventive for the avant garde musical interpretation. Meow Meow’s closing number, a soulful rendition of Edith Piaf’s beautiful ‘A quoi ça sert l’amour’ really did leave the audience begging for more.

Meow Meow’s Pandemonium is a treat and the Adelaide audience absolutely loved every moment. Many happily queued in the foyer after the show to speak with the diva in person and buy a CD or two.

Meow Meow performed for one night only at 18 June 2022 as part of the Adelaide Cabaret Festival.