Short Stories from the award-winning author that continue her exploration of those overlooked and marginalised.
Thuy On 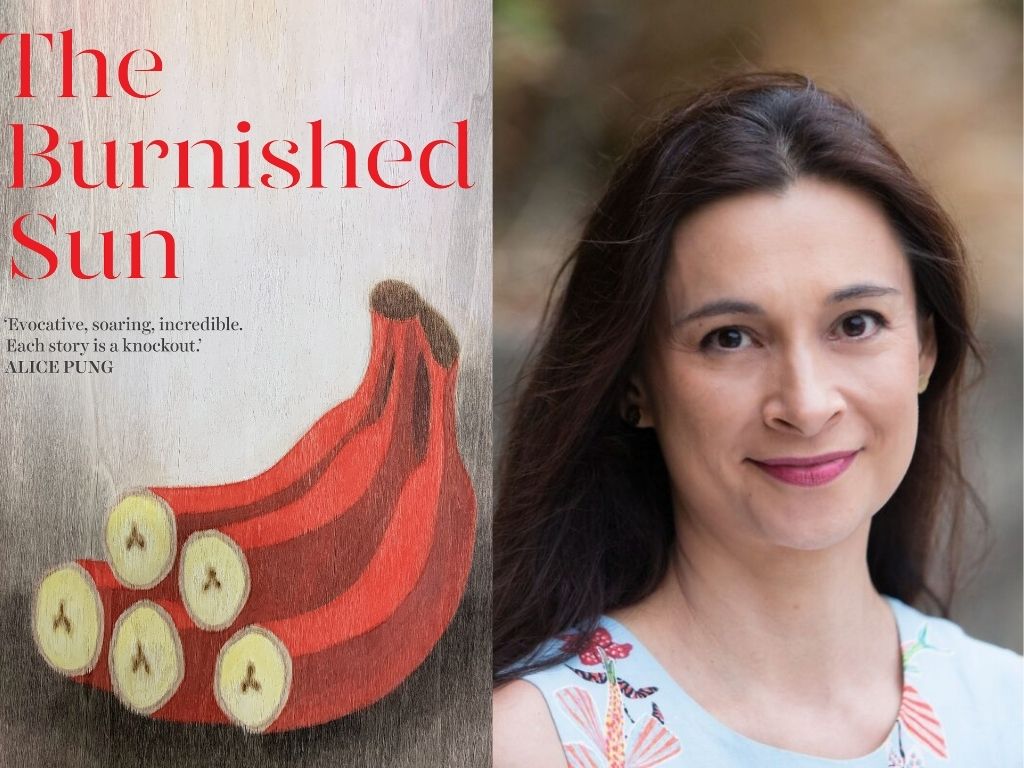 ‘She offers a voice to the disenfranchised and the casually forgotten and exploited.’ Photo by Claudia Baxter.

Mirandi Riwoe impressed mightily with her debut novel, Stone Sky Gold Mountain, a book that blew the dust away from a little known corner of history in its re-telling of Chinese diggers in North Queensland during the Gold Rush. It touched on matters relating to identity and race, exile and immigration, privilege and colonisation. Its ‘own voices’ perspective, written from the viewpoint of  Chinese settlers, re-casted a period in time that would’ve otherwise relegated her protagonists to the footnotes.

In her latest, a collection of short stories, Riwoe continues to write about those deliberately or inadvertently shelved away, easily discarded from history’s grand remembrance of things past. She offers a voice to the disenfranchised and the casually forgotten and exploited.

The Burnished Sun begins and ends with two novellas: each one pulls to the fore a character with little agency of her own. There is a fiercely feminist fire in Riwoe’s words as she paints the story of ‘Annah the Javanese’, a recreation of one of Paul Gauguin’s models in the grim coldness of 19th century Paris. Annah’s merely one of the artist’s disposable ‘exotiques’ that he strives to render in oils to further his burgeoning career.

In this environment of the ‘damp pong of cabbage and mould’ Annah is wholly out of her element and dreams of the warmth of her island and family. Beholden to Gauguin for her keep she grudgingly moves between being his model and his mistress. Written in the third person, the sympathy lies purely with this small, tragic figure, ‘a frayed thread torn far from the tapestry of home’. Gauguin acquires a pet monkey and Annah’s gradual recognition that the plight of this caged creature is not dissimilar to her own circumstances is pitiful. Her history of servitude only obliquely referred to, Annah seems destined to be a mere addition to his ‘primitive aesthetic.’ But there is a strength of will beneath her apparent docility that will serve her well and lead her to create her own story. Transformation is in the offing.

Another outsider figure rudely and abruptly brought under the control of mercantile patriarchy is even more tragic than Annah. In the final offering, ‘The Fish Girl’,  Riwoe rescues a throw-away mention of a young Indonesian woman in a W Somerset Maugham tale and shows us how she’s used as a pawn in the trading of commerce and sexual favours between men. It’s a powerful and heartbreaking feat of imagination.

In between these bookended tales, Riwoe’s other stories are similarly affecting: there’s an Indonesian maid who’s trying to eke a living far far away from her toddler son so she can send money home to her family.The connection and loss of children is a common refrain; another offering tells of a freakish accident of a son while in Bali, and a mother’s attempt to retrace his final steps, while a third deals with a nursing home resident unable to be in touch contact with her loved ones due to COVID strictures.

Elsewhere, the changeable masks of identity is explored in a tale about a woman performing the role of ‘London’s premier Chinese reciter, Oriental Actress and Exotic Expert’ and delivering highly embellished stories to an audience who desire such tales and a young, migrant mum struggling with assimilation when her son fails to be invited to any of the kindergarten parties.

As Jean Rhys did in Wide Sargasso Sea, offering Antoinette, the Creole heiress who becomes the ‘mad woman in the attic’ in Jane Eyre a chance to tell her version of slavery and entrapment, so Riwoe offers her women a platform and her readers an insight into how structural socio-economic, patriarchal and colonial inequalities strove to pin their lives down and disable their agency.

Riwoe’s prose is poetic and lyrical; there’s a vibrant life force in all her characters, regardless of how fraught their experiences. With their rich evocation of time and place that roam across continents, her narratives are such that each story demands attention to the end.