A night of storytelling and music by a master raconteur.
Dr Diana Carroll 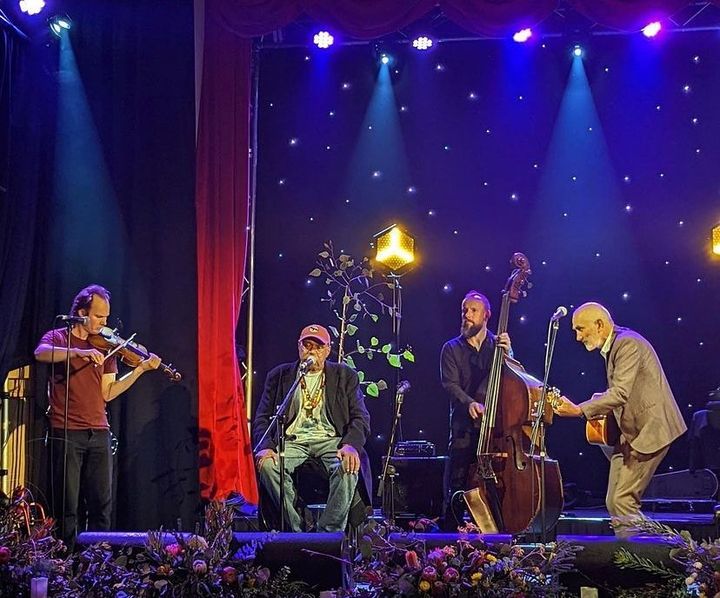 ‘As fans of Uncle Archie know, his live performances are as much about yarning as they are about singing.’ Photo from Facebook.

There’s something very special about sharing an evening with Archie Roach AM, singer, songwriter, social activist, ‘voice of the Stolen Generations’, and much-loved raconteur.

The Tell Me Why tour, billed as ‘the final round’, was to have taken place last year, but life intervened. Now Roach is on the road again, somewhat more frail in body, but strong as ever in spirit. Even though he’s only 66-years-old, the wheelchair and oxygen bottle are essential accessories due to his battle with cancer and having large parts of his lungs removed, but making music and telling stories are still what Uncle Archie does best.

Roach was well supported on stage by an excellent five-piece band, led by his long-time musical director ‘the maestro’ Paul Grabowsky, and accompanied on vocals by old friend Sally Dastey. The mutual respect and admiration between each of these performers was evident and added a real warmth to the concert.

As fans of Uncle Archie know, his live performances are as much about yarning as they are about singing. And while many of his life experiences are unique and deeply personal, there’s also something universal in his shared stories of love and loss, of family and identity, and of struggling to find your  true place in the world. In his words, ‘our heart tells us where to go; our face tells us where we’ve been’.

Read: Opera review: The Rise and Fall of the City of Mahagonny

The Tell Me Why concert is as much a memoir as it is a concert. It features all his well-known songs, along with a few newer ones. But really it’s about yarning and the Adelaide audience couldn’t get enough of his stories. And even though there’s much to feel sad about, it seems that somehow when Archie tells these stories of his life you’re left with feelings of gratitude and upliftment rather than bitterness.

Many of the stories are about the now-departed Ruby Hunter, the absolute love of his life and soulmate in life and music for some 40 years. Even though she died back in 2010, the pain and loss are still there, etched on his face and echoed in his words. Archie and Ruby met by chance in Adelaide when they were just teenagers, at the romantically-named Peoples’ Palace in inner-city Pirie Street, in reality just a hostel run by the Salvation Army. That deep relationship between Roach and Hunter is the focus of a recent film by director Philippa Bateman; there’s also a memoir by Roach, entitled Tell Me Why – the story of my life and my music that was released in 2019.

As Archie yarns with the audience, Grabowsky keeps up a gentle riff on the piano, providing a moody musical backdrop to the stories. And even with some 1,500 people in the full-house at Her Majesty’s, Roach makes every story feel like a personal conversation. He’s not talking to the audience, he’s talking to you and you alone. It’s a wonderful ability and something that feels so genuine, not just well-practised stage craft.

The affection from the audience was palpable, from the calls throughout the performance of ‘we love you, Archie’ to the spontaneous and sustained standing ovation as the concert sadly came to a close.

Archie Roach: Tell Me Why
Her Majesty’s Theatre, Adelaide

Archie Roach performed for one night only at Her Majesty’s Theatre on Thursday 28 April. The show travels to Perth Concert Hall on 17 May 2022.