In this poignant memoir, Ousback and her brother Anders endure a tough, confusing childhood steered by complex, demanding and rather odd parents.
Gillian Wills 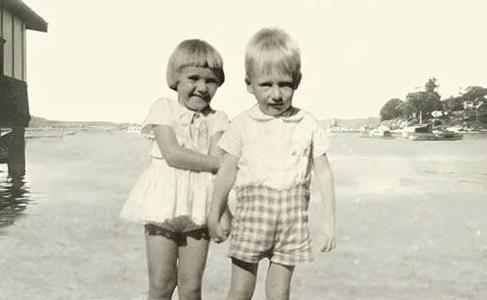 Despite growing up in ‘Scandia,’ the original Boatshed in Balmoral on the lower north shore of Sydney, a rewarding setting of gulls and golden sand, lapping waves, keen swimmers and thickets of sailing masts, Ousback and her brother Anders endured a tough, confusing childhood steered by complex, demanding and rather odd parents.

Gustav and Toots, hired out dinghies, skiffs and canoes and in their Milk Bar sold soft drinks, sugary treats and ice cream for a living. While the children grappled with uncertainty, the ocean riffed underneath their dilapidated weatherboard while Pela, a pet sulphur-crested cockie with a potty mouth, mimicked customers.

Ousback’s voice is tempered like a calm sea and yet, the incidents she relates are harrowing. There’s no wallowing in self-pity, yet Ousback and her brother Anders weathered physical, emotional and punitive trauma. Anders also struggled with a secret he dare not disclose. Ousbach’s anecdotes are understated enough to let the full horror hit home like a slow burn. Her humour is withering and she excels in the casual throwaway for instance, as a baby Gustav often threw her off the landing into the sea as a punishment.

Ousback’s voice is tempered like a calm sea and yet, the incidents she relates are harrowing.

Whatever hardship and injustice Ousback and her brother endured and no matter how much they craved affection and an occasional positive word, Toots and Gustav’s narcissistic ups and downs, woes and joys were the only ones that mattered. Gustav’s slowly revealed menace looms in the background. When Toots learns her mother has died, Gustav offers no comfort and it’s not discussed even though the family are dining together.

Like rats in a control box subjected to random electric shocks, the siblings suffered from a culture of unpredictability that dogged their formative years and created chronic insecurities in adulthood. Each parent’s expectations could rapidly shift which caused confusion as the siblings navigated a path through a perplexing domestic culture.

As there was no rational reason for their mother or father’s swings between scolding antagonism and neglect and bouts of intermittent tenderness, the children fell prey to a pathology of self-blame. Anders especially grappled with crippling self-doubt even as his star steadily rose as a highly-feted chef, gifted potter and restaurateur in Sydney. Ousback became a world-class designer of children’s clothing.

Gustav’s power over Toots is demonstrated when she accidentally drops her husband’s prized pump, used to siphon water out boats, into the sea. She’s not allowed to use it and fears his fury. She wakes her children, late at night, makes them change into swimmers and takes them to where the boats are moored. She orders them, to dive repeatedly into an icy sea to retrieve the pump. Terrified of sharks – a man’s leg wearing a shoe had been recently cut out of a shark’s belly – Ousback also imagined her lungs would burst from holding her breath underwater for a long time. She was ten years old.

Ousback’s deep affection for Anders is touching and her deceased brother’s input is represented through Anders’ letters and poignant journal extracts woven into the story. As a small boy, Anders put a brown paper bag over his head and jumped into the sea because as he explained to Toots, ‘I wanted to know what drowning was like.’ This was a tragic portent of what was to come.

Enjoyable and intriguing on several levels, this memoir is a worthy read.