Tarnanthi a catalyst for international partnerships

Sitting at the core of this month's Tarnanthi Festival are 30 newly commissioned bark paintings that are set to reshape international curatorial practice around Aboriginal art.
Gina Fairley 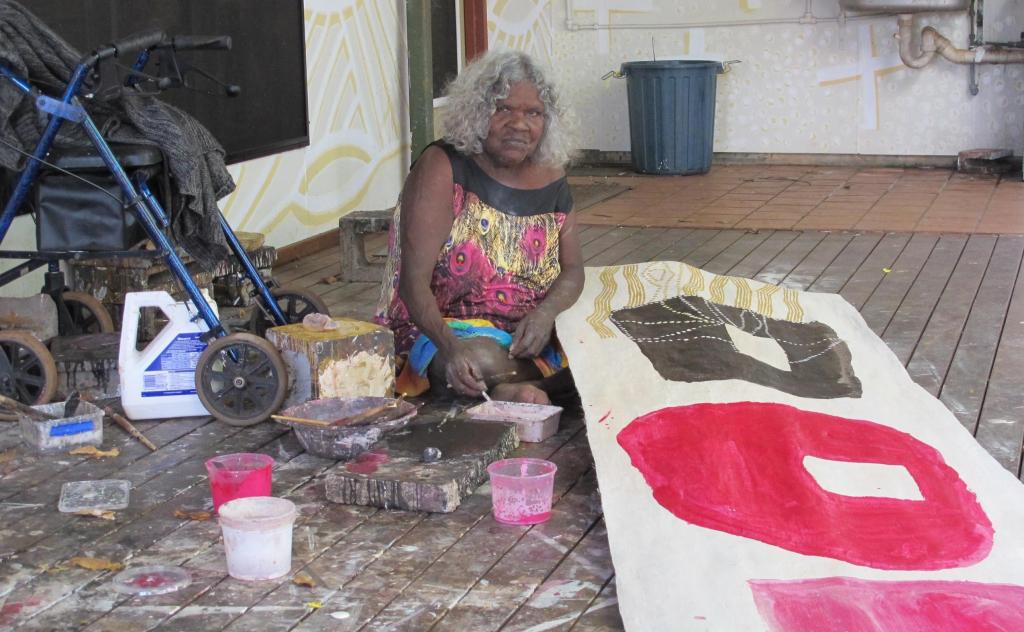 Tarnanthi will unveil its next edition later this month, the fourth time since 2015. The Festival was envisaged to enable visitors to experience the diversity of contemporary Aboriginal and Torres Strait Islander art – a celebration couched in a thriving innovative culture shaping our future.

Presented by the Art Gallery of South Australia with various satellite venues across Adelaide, it will bring together the work of over a thousand First Nations artists from around Australia.

However, this year’s Tarnanthi takes on an even more ambitious footprint.

30 Yolŋu artists have been commissioned to make new bark artworks for the exhibition Dhawuṯ, which will sit within the Festival’s core exhibition Gurruṯu at AGSA.

Dhawuṯ will then travel to America to join the exhibition Madayin: Eight Decades of Aboriginal Bark Painting from Yirrkala, curated from the Kluge-Ruhe Aboriginal Art Collection. It will be the first major survey of Aboriginal bark paintings ever staged outside Australia and will tour America from 2021-2023.

What further sets this project apart is that it is a pioneering collaboration between Yolŋu and non-Indigenous curators, and brings archival works together with the newly-commissioned barks to demonstrate a continuum of culture.

From remote Australia to the world

The tour and commissions have been three years in the planning, and while its origins stem from the University of Virginia’s Collection, Kade McDonald told ArtsHub that it was important the new commissions were shown in Australia – at Tarnanthi – first.

‘Nici (Cumpston, curator of Tarnanthi) had already been planning to do a feature of Yolŋu artists for this year’s festival, so she asked me to come on board as a sort of “visual arts producer” to help pull these two projects together,’ said McDonald.

He added that the Dhawuṯ commissions reached back to 2015 when Djambawa Marawili did a residency at with Kluge-Ruhe. He recalled Djambawa discovering archival works stored in the basement. ‘He said, this is all my forefathers’ work; these are my works … this narrative doesn’t end.’

Cumpston told ArtsHub in an earlier interview: ‘One thing the Kluge-Ruhe Collection is renowned for is waking up its holdings by commissioning new work by artists. They have some really old bark paintings but also a series of very large scale barks that John Kluge commission in 1996. They were some of the first large scale barks made at the art centre.’

McDonald continued: ‘It was a huge step forward for Buku in terms of the big barks they started to make, and it was a real push in the success of this art centre. They were possibly the first major barks to enter an international collection.’

The Dhawuṯ project is again a game-changing moment.

‘Sure, you can bring those barks out from America and tour them around Australia, but you are just demonstrating a place where it ends. Djambawa was saying this is not an archive – an exhibition of things sitting in drawers – but that we need to demonstrate that these barks are still so much alive,’ McDonald said.

McDonald makes the point that historically a lot of shows in the US have been surveys of Aboriginal art. ‘You get all these bits and pieces from a lot of places. While it offers a great first step to show that diversity, American audience are ready for something that is highly curated from a specific area that is not just a broad survey.’

He added that it also means that an appreciation for Aboriginal art is starting to move beyond the museological frame, and is  very much a contemporary dialogue.

The barks will be accompanied by an extensive media component including video, audio recordings and archival photographs, developed by the Aboriginal media unit at Yirrkala, The Mulka Project – who have also been pivotal in creating a new work for Tarnanthi.

You can catch the suite of 30 new commissioned Yirrakala barks in Dhawuṯ at the Art Gallery of South Australia from 18 October 2019-27 January 2020 as part of the Tarnanthi Festival.

The writer travelled to Yirrakala as a guest of the Art Gallery of South Australia.