This year is shaping up to be a return of the writers festival as events that were cancelled are all set to comeback in 2021. Fill your arts calendar with these writers’ festivals and literary programs.
ArtsHub 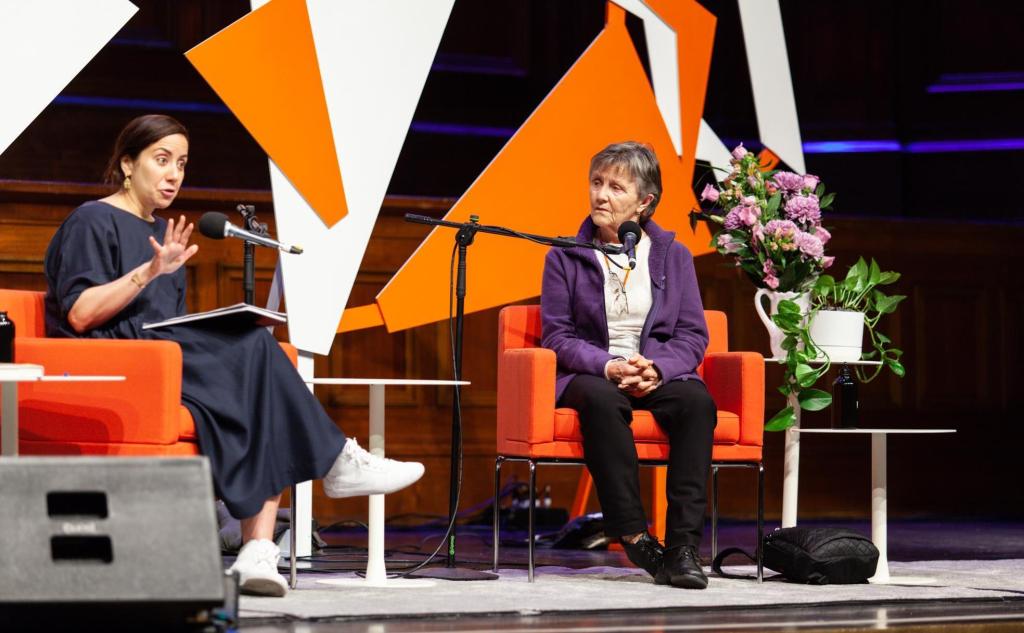 Writers festivals changed over the course of 2020 due to the COVID-19 pandemic with many pivoting to an online model. In 2021 a hybrid model of online and live events is popular allowing more people to attend events without leaving home. Here are our highlights to add to your calendar.

Perth Festival (WA), 5-28 February
Perth Festival’s Literature & Ideas program is back for 2021. Featuring a Day of Ideas, the program also boasts conversations with writers such as Trent Dalton and Rebecca Giggs.

This year’s Literature & Ideas Program will extend across the three weeks of Perth Festival 2021. The first weekend starts on 13 February with A Day of Ideas. On 21-22 February there will be more than 30 events for Literature Weekend in the City. Closing off the program on 28 February with Wild Things: Perth Festival Takes over Perth Zoo.

Voices on the Coast (QLD), 25-27 February and online 1-5 March
The youth literature festival will be made up of two student days and several additional community events in 2021. They are also offering an online program starting in March.

Wheeler Centre at the Royal Botanic Gardens (VIC), 7 February
This year the Wheeler Centre, which has presented more than 3,000 speakers since it was founded, will host a double bill in Melbourne’s Royal Botanic Gardens. Honouring the legacy of Ruth Bader Ginsburg with a panel conversation, and then a presentation of the Australian premiere of Derrick Wang’s opera Scalia/Ginsburg.

Adelaide Writers’ Week (SA), 29 February – 5 March
As usual, Adelaide Writers’ Week sessions will be held in the Pioneer Women’s Memorial Garden. Sessions are free, however all patrons will be required to do a COVID-Safe Check-In. The full lineup and schedule will be released on 27 January. Winners of the Adelaide Festival Awards for Literature ($100,000 total prize money) will also be announced during the week.

Somerset Storyfest (QLD), March
Held in March each year, this is a festival for the whole family. Storyfest offers its cornerstone three-day event as well as workshops and talks throughout the year.

Brimbank Writers & Readers Festival (VIC), March
This festival was held online in 2020 with a series of videos featuring six authors in intimate conversation available for the online event with all conversations filmed at the Bowery Theatre. The 2021 program has yet to be released but is expected to run in March.

As part of Castlemaine’s Festival of Ideas, this five days of presentations, panels, debates and discussions will celebrate the notion of ‘community’.

Sydney Writers’ Festival, 26 April – 2 May
Pivoting online in 2020, the full program for Australia’s biggest celebration of writing and ideas will be announced in March.

Clunes Booktown Festival (VIC), May
Usually held in the first weekend of May, the annual festival in the Victorian Goldfields was cancelled last year with a move to digital with the Booktown on Sundays. It is set for a ‘watch this space’ in 2021.

Bendigo Writers Festival (VIC), 7-9 May
The regional festival will take place May 7-9 in 2021, with a program of virtual and live events. The Book Marks events are ones to look out for.

Queenscliffe Literary Festival (VIC), May
Returning in May for 2021, Queenscliffe Literary Festival started early with a pop-up event in January with John Wood in conversation. This seaside literary festival offers a dynamic and lively program, including a free children’s program and a secondary school writing prize. The full program will be released closer to the festival date.

NT Writers Festival (NT), May
A four-day festival that speaks to and from the heart of Australia and the Northern Territory, the NT Writers Festival moved to mix of live and digital events in 2021. The full program will be released closer to the festival date.

Margaret River Readers & Writers Festival (WA), 14-16 May
The biggest regional literary event in Western Australia is back with an exciting program of novelists, journalists, academics and storytellers, both established and emerging. The theme for 2021 will be Written Worlds.

Denmark Festival of Voice (WA), 4-6 June
Held on the land of the Noongar people, the festival in the town of Denmark gathers together musicians, storytellers, speakers, poets, writers and other artists in a celebration of the human voice. A full program will be released closer to the festival date.

Fostering the importance of books and reading, the Capricorn Coast Writers Festival brings together a mix of authors, editors, publishers over a jam-packed weekend – all against the backdrop of the beautiful Capricorn Coast.

Emerging Writers’ Festival (VIC), June
Taking place in June of 2021, this festival went online for 2020. The full program is yet to come.

Willy Lit Fest (VIC), 19-21 June
The festival held in Melbourne’s Williamstown is now a staple of the literary calendar with a strong focus on local participation, including the Ada Cambridge and People’s Choice awards for writers young and old. Looking optimistically at the coming year, the theme for 2021 is Silver Lining.

Shoalhaven Readers & Writers Festival (NSW), July
Part of an effort to build Nowra and the Shoalhaven as a hub for the arts and creativity, the festival was cancelled in 2020 due to the Pandemic. The 2021 iteration has been confirmed. The festival is currently seeking expressions of interest for the 2021 program.

Festival of the Photocopier (VIC), August
This year Sticky Institute’s has moved their zine fair online with ftop.online with plans for an in-person at North Melbourne’s Meat Market in in August.

Blak & Bright Festival (VIC)
Exact dates are yet to be announced for the 2021 First Nations Literary Festival.

Canberra Writers Festival (ACT), August
The festival was reimagined in 2020 and delivered online. The 2021 program will be announced later in the year.

Words in Winter (VIC)
Words in Winter is an annual literary and arts festival held in August each year in the Hepburn Shire and surrounding districts.

Queensland Poetry Festival
Dates are yet to be confirmed for 2021.

Melbourne Writers Festival (VIC), 3-12 September
The 2020 festival moved completely online but the 2021 festival will be the first for Artistic Director Michaela McGuire and may see a hybrid of live events and online options.

Tamar Valley Writers Festival (TAS), September
The biennial three-day event at Tamar Valley Resort celebrates, explores and critiques writing of all genres. The 2021 date has yet to be confirmed.

Write Around the Murray (NSW and VIC), 9-13 September
The festival is became Write Around the Online Murray in 2020. A five-day festival of storytelling now held online, the full program for 2021 has yet to be released.

Kimberley Writers Festival (WA)
Organised by the Kununurra Community Library, the event offered online session in 2020. A program for 2021 has yet to be released.

Big Sky Readers and Writers Festival (WA), October
Hosted by Geraldton Regional Library, the popular festival offers a mix of talks, workshops and other activities. Dates are yet to be confirmed for 2021.

Hobart Writers Festival (TAS), 8-10 October
The Apple Isle’s capital will host the festival again in 2021 on the lawns of State Parliament House.

National Young Writers’ Festival (Newcastle)
Typically takes place over the NSW Labour Day long weekend of each year in 2020 the festival pivoted online. Dates are yet to be confirmed for 2021.

Word for Word National Non-fiction Festival (VIC)
Australia’s only non-fiction festival embraced a digital program for 2020. Word for Word Festival’s theme for last year was ‘Life, Changing’. Dates are yet to be confirmed for 2021.

Independent Publishing Conference (VIC)
Hosted by the Small Press Network, this conference looks at small to medium publishers with workshops, panels and keynotes from within the industry.

Dates to be Confirmed

Melbourne Rare Book Fair (VIC)
In 2020, the festival was cancelled due to the pandemic. 2021 dates have yet to be announced.

Wordstorm (NT)
Held annually in either Darwin or Alice Springs, this is event is one of the highlights of the NT’s literary calendar.

Blak & Bright Festival (VIC)
The First Nations Literary Festival was interrupted last year and exact dates are yet to be announced for the 2021.

Terror Australis Readers and Writers Festival, (TAS)
With a focus on crime this festival has been a highlight of the Tasmanian calendar but no dates are confirmed for 2021 as yet.

Disrupted Festival of Ideas (Perth)
The festival takes place at the State Library of Western Australia with a day of free events including conversations, panels and activities. Last year it was held in November but may move earlier in the year.

Ubud Writers & Readers Festival (Bali, Indonesia)
Since 2004, the festival in Bali has brought together some of the world’s most powerful voices across literature and the arts. In 2020 the festival went digital and dates are yet to be confirmed for 2021.

What did we miss? Email updates to editor@artshub.com.au.