Tasmanian ecology shifts as festivals move out of Hobart

Will the relocation of Ten Days on the Island and Mona Foma away from Hobart help heal Tasmania’s long-standing north-south divide?
Richard Watts 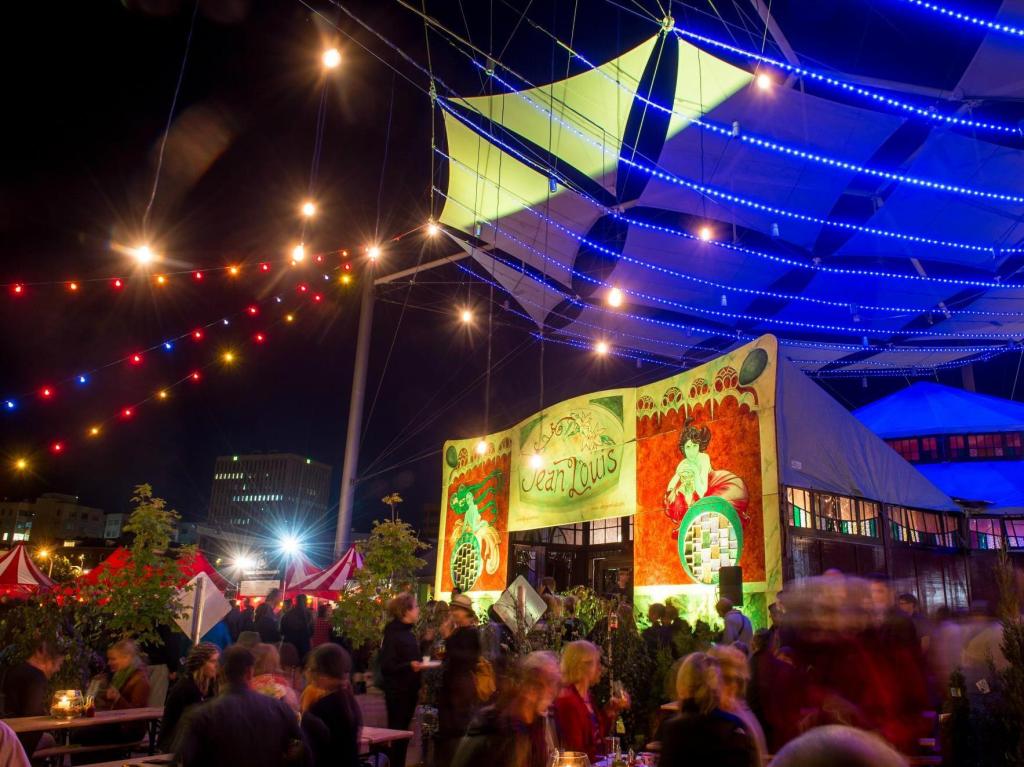 The Spiegeltent at Ten Days on the Island; photo via tendays.org.au.

The opening of David Walsh’s Museum of Old and New Art (MONA) in Hobart in January 2011 triggered a significant spike in cultural tourism to Tasmania. Visitor numbers are still growing: the latest Tasmanian Tourism Snapshot (published quarterly by Tourism Tasmania) records a 9% increase in tourist numbers in the 2016-17 financial year. Collectively, such visitors spent a total of $2.26 billion (a 10% increase on the year prior) during their time on the island.

Similar growth has been recorded by MONA’s winter festival, Dark Mofo. The first Dark Mofo, held in June 2013, attracted 128,000 people. The fifth such festival, held in July this year, was attended by an audience of 444,056.

Clearly, cultural tourism is big business in Tasmania – but is there a dark side to the so-called ‘MONA effect’? Does Walsh’s museum dominate the cultural ecology to an unhealthy extent?

Some in Launceston clearly think so, with one artist at the recent Junction Arts Festival telling ArtsHub: ‘The problem with MONA is that it casts a long shadow and nothing grows in shadows.’

Such comments echo previous suggestions made to ArtsHub. In 2013, two years after MONA opened, the Director of Launceston’s Queen Victoria Museum and Arts Gallery (QVMAG), Richard Mulvaney, told ArtsHub, ‘there are people who are going to some parts of the state – largely Hobart – and not seeing the rest of the state as a result of MONA.’

Suspicions that MONA has unbalanced the state’s tourism market might in part be attributed to the traditional rivalry between Tasmania’s north and south, described as ‘an enduring factor in Tasmanian life for two centuries’ by The Companion to Tasmanian History. But while the island’s North-South divide has impacted on almost all aspects of Tasmanian life to date – even its lack of a state-based AFL team – recent moves afoot in the arts sector might help address the island’s historic rivalry – at least temporarily.

In recent weeks, two Hobart-based festivals have announced their intentions to relocate to the northern part of the state. Together with existing festivals such as Queenstown’s The Unconformity, they are helping shift the focus of cultural tourism away from the south.

In August, Ten Days on the Island opened a new headquarters in Burnie, in the state’s north-west. The month prior, plans to move MONA’s summer festival, Mona Foma, to Launceston were publicly floated in conjunction with David Walsh’s announcement about a proposed new hotel and casino at the museum’s Berriedale site.

Last week those plans were confirmed, with festival curator Brian Ritchie announcing a ‘mini-Mofo’ would be held in Launceston over 12-14 January 2018. Plans to completely relocate Mona Foma to Launceston from 2019 are apparently well advanced, although some sources suggest this is only a temporary move, and that the festival will move back to Hobart and the MONA site once construction of Walsh’s new hotel is completed.

‘I just came from co-hosting a radio show with Premier Will Hodgman. Much of it was fun and games but one serious thing we discussed on-air was the need to break down the North/South divide in Tasmania. And we agreed that moving Mona Foma to Launceston might be an effective way of doing that,’ Ritchie told ArtsHub.

‘Building the hotel onsite precludes us from continuing Mona Foma onsite. We looked at a range of potential relocation plans, including going back to the Hobart waterfront as we were the first seven years. Moving to Launceston was the most radical vision. MONA has always had a tendency to leap headlong into doing stuff. So we’re doing it again.’

Launceston Mayor, Albert van Zetten, told ArtsHub: ‘It’s definitely welcome news that such a successful festival is looking to expand into Launceston in 2018, and is open to other opportunities in 2019 and beyond. Tasmania is blessed geographically in that it is possible for a festival or event to be hosted at multiple locations and the logistics don’t automatically prevent that.’

Launceston already has a thriving arts community but ‘there’s always room on the calendar for other events,’ van Zetten said, adding that the move north could also directly benefit Mona Foma.

‘There can also be benefits to the events themselves by entering new markets. If you have a successful festival that has been running for a couple of years, the freshness can wear off for locals but if you open up in a new location and your event has created a buzz in previous years somewhere else, word travels and you can find a whole new host of new supporters,’ he said.

Liz Frankham, President and Chair of the Junction Arts Festival Board, similarly welcomed the news of Mona Foma’s relocation to Launceston.

‘It’s something that a number of key stakeholders in the north support, from the business community to the City Council and the University,’ she said.

With the University of Tasmania already poised to expand its Launceston campus thanks to $150 million of federal funding, Mona Foma’s relocation was an opportunity to ‘add collateral to the whole of the city to make it more compelling to students as a place to study and also for visitors to spend more time in the city and engage with its cultural life,’ Frankham said.

She dismissed suggestions that the festival’s move north was an attempt to redress any negative impact MONA and its festivals had had on cultural tourism by drawing away visitors from other parts of Tasmania.

‘I think it’s more about the fact that there is now a recognised opportunity to be able to drive [visitors] across the rest of the state. We all recognise the advantages of cultural tourism … MONA’s impact on Hobart is a marvellous thing, it has been very successful in the south and this is a fantastic opportunity to actually make a difference to the north and the north west coast using cultural tourism,’ said Frankham.

This is not the first time an announcement has been made about the potential expansion of one of MONA’s festivals. However, plans to expand Dark Mofo north to Launceston were shelved in 2014, with the festival’s Creative Director Leigh Carmichael citing the festival’s inability to ‘develop a sustainable business model at this time,’ for the cancellation.

Ten Days also on the move

Mona Foma is not the only Tasmanian arts festival to be making a northwards push, with the biennial festival Ten Days on the Island opening its new base of operations in Burnie, in Tasmania’s north west, last month.

In addition to its new headquarters, the Festival will maintain a small administration office in Hobart for the foreseeable future.

Festival Chair Saul Eslake said being based in a regional centre would benefit the festival’s state-wide programming approach when the next Ten Days on the Island is rolled out in March 2019.

‘We’re excited to be refocusing our approach as a regionally based operation with a program that is sourced from Tasmania’s regions, developed within a worldview and presented across the state,’ Eslake said.

Eslake said the festival’s move to Burnie will allow Ten Days to partner more closely with UTAS, Burnie City Council and other councils and bodies in the region, creating stronger partnerships and boosting skills development and employment in the region.

‘As we develop our new model, we’ll be looking to build the festival team in the Burnie and there will be opportunities for locals to be part of the growing arts, festivals and events industries,’ he said.

Ten Days on the Island’s new Artistic Director will be announced in the coming weeks and is expected to be someone with a strong commitment to the regional arts sector.

As part of its move out of Hobart, Ten Days on the Island has received additional funding from the Tasmanian State Government to help build its regional base and increase its support for locally created and produced arts experiences.

This is an abrupt turn-around from the government’s previous position – a promise made during the Tasmanian state election in 2014 – of cutting Ten Days’ funding by 50%.

Government is not leading the charge

Surprisingly, the relocation of Ten Days on the Island to Burnie and Mona Foma to Launceston are not part of a wider government strategy to decentralise the artistic dominance of Hobart and disseminate cultural tourism destinations more broadly across the state.

‘The Tasmanian Government is committed to supporting arts and cultural events in the state and making Tasmania one of the world’s greatest event destinations,’ a Department of State Growth spokesperson told ArtsHub.

‘The relocation of both Ten Days on the Island and Mona Foma are unconnected. However, the Tasmanian Government is supporting the concept of relocating Mona Foma in recognition of its economic and cultural opportunities for Launceston. Funding for Mona Foma is currently being finalised with arrangements to be announced shortly.

‘The Government has committed additional funding of $500,000 per annum as continued support for Ten Days on the Island, assisting the festival to transition to new approaches and repositioning the festival to focus primarily on regional Tasmania.’

In 2013, ArtsHub was told that Tasmanians needed to work ‘more collaboratively across the whole arts and cultural sector’ in order to grow the cultural tourism market for the benefit of the state as a whole.

‘The City of Launceston has been in discussions with MONA for several years and they’ve clearly been looking to the north of the state for some time with a view to making their presence felt here,’ said van Zetten.

‘There certainly is a sense of a more collaborative, state-wide approach to arts events and no doubt that will gather steam when the mini Mona Foma event comes to Launceston next year.’

Mona Foma takes place in Hobart and Launceston from 12-22 January 2018. The full program will be announced on Friday 13 October 2017. Visit www.mofo.net.au for details.

Dates for Ten Days on the Island 2019 have yet to be announced: tendays.org.au