A recent panel speaks of soft language choices, fear, mob-led shifts in modalities and the need for greater mentorship opportunities when it comes to Indigenous Art Criticism in Australia.
Gina Fairley 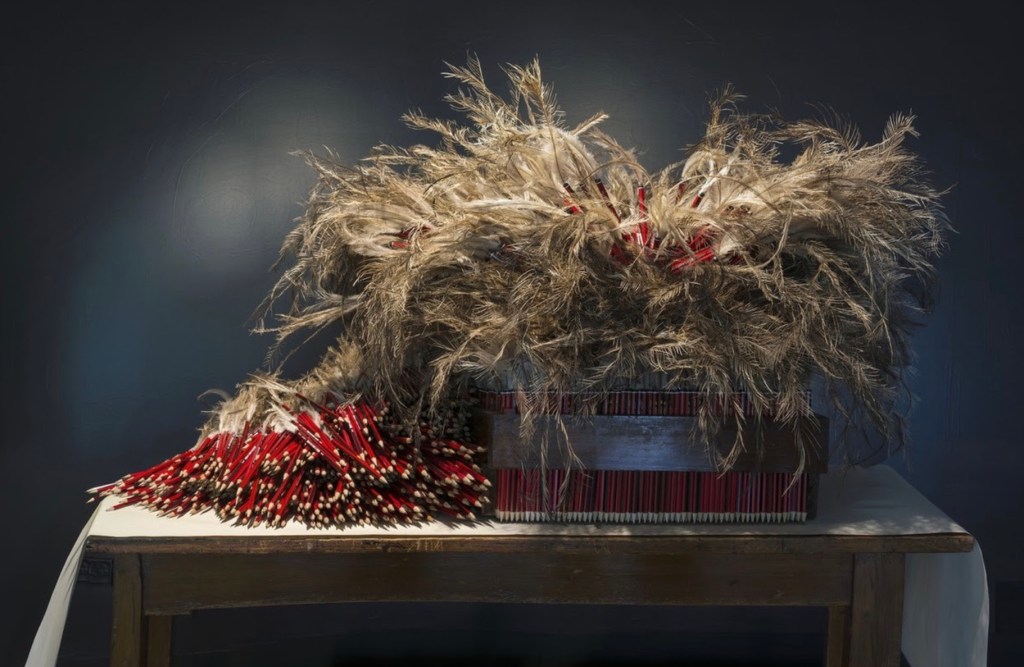 As recently as the past five years, we have been witness to a rapid rise of Indigenous curators positioned within our art museums, as well as a growing pool of active Indigenous voices published in exhibition catalogues and magazines. But is it enough, and what are there hurdles that remain?

They make the point that while we may be witnessing a rise, many have equally publicly decried/identified the lack of Indigenous art writing – and criticality.

‘Few platforms exist for Indigenous critical writing in Australian and international publications,’ was the conclusion. ‘At the same time, existing Indigenous art writing is often interpreted as being either too uncritical or too dependent on the legacy of the west.’

We take a deeper dive into their conversation.

Bullen spoke of a recent experience she had at the MCA, where she had curated a major survey exhibition by Queensland artist Richard Bell. ‘I had an art critic from The Australian, who refused to come to the Richard Bell exhibition for reasons that were condescending and horrific … Part of the reason they wouldn’t come was that they would be confronted with having to write something they knew absolutely nothing about.’

It is this critical landscape that the panel agreed needs to be broken – shifting the authoritative voice from a non-Indigenous, non-knowing lens to one that is centered in Aboriginal culture.

Bullen made the point that this important conversation around criticism must well from the position of ‘our own culture’, adding that in order to do that, it means looking at ‘different modalities of writing, in terms of art criticism of Blak artists, a tradition of aural spoken word, and how can we give space within art criticism in English.’

Moulton said that while she is an obvious advocate for ‘more mob in those spaces’, she added that while ‘the white guy review is one thing, but put it up together with one writer from our mob’s perspective, so you have both versions.’

The panel organisers quoted artist Vernon Ah Kee leading into the symposium: ‘We need to develop a language through which we can critique our own people … You just can’t start hammering away with broad swords independently; there has to be a methodology to it.’

Framing this discussion – and leap frogging from Ah Kee’s point of methodologies – Bullen turned to a number of Award winning texts each of the panels had written as a way of navigating considerations when approaching the critical space of Indigenous writing.

Mundine spoke about taxonomy, and his experience of working in Arnhem Land in the early 1980s recording the words they used, but also identifying artists. ‘The thing that struck me about Aboriginal art [at the time] was the problem of trying to identify individual artists and their individual style and intelligence, and individual personalities – they were not really recorded or thought about.’

‘It was about creating the artist as a 3-dimensional person, and to collate as much of the knowledge systems at the time and correlate that with the common English name (eg. a cockatoo) but also the Latin name – people poked fun at me at the time – but that was to emphasis the intelligence of the Aboriginal artist and the knowledge systems,’ Mundine explained.

He implied that the same kind of equal footing is just as relevant – and more so today – some 40-years later.

Bullen added: ‘I loved your essay so much in the way you talked about “the great Australian silence”. This kind of writing draws together the reasons why those artists did what they did, and the kind of outcomes that came out of that – and [demonstrates] just how important it is for Blak writing to push against this great Australian silence.’

Read: 20×20: Australian writing has a blak past and future

In a similar sentiment, both Pinchbeck and Moulton called on the personal to create validation. Pinchbeck spoke of her award winning work on the publication and exhibition, Art from Millingimbi, explaining: ‘In terms of the publication, I am an intermediary that captures and shares information that is passed on to me.’

She continued: ‘Over time as I travelled back and forward from Sydney and Millingimbi, constantly checking information. It was really ensuring that people in Millingimbi were really comfortable with the shape and nature of the information I was capturing and the format I used to share that with the public so that it was as culturally respectful and as relevant as possible.’

What Pinchbeck hinted at was the time needed when writing for, and about, community. Bullen summed it up: ‘So you are not only recording an exhibition’s development, but the way they want to tell stories.’

Bullen asked: ‘The big question that I want to talk to the panel about is how can the personal and political histories be embedded in art writing, so that [those texts] are centered in our own voice?’

Moulton offered:  ‘My uncle has taught me it is about centering yourself … this leads me into a writing that connects both personal narrative but is also critically looking at these collections and spaces.’

Bullen agreed:  ‘It is very difficult to start “othering” when you are faced with a first person connection to objects and material, and what that made you feel, and that has shifted thinking for me. How [we] get non-Indigenous writers to understand that this is very personal to us, remains a challenge.

‘We spoke about the role of the editor, and if we are thinking about art criticism or writing in a context of an art magazine, we need to also consider how influential the editor can be in the way we write as well,’ said Moulton. ‘I have had issues when I write about an artist [and am forced to use the art history convention] – and I have personal relationship to them – so I don’t like using their last name. It is very dislocating, and I always get a lot of push back when I don’t use it, but that is a methodology I am personally trying to embed and change.’

‘As First Peoples we have to constantly shift in and out of modes of working for our mob, for our communities,’ she said.

Pinchbeck also sees her role when writing as very much ‘for mob’. She spoke about having to educate people [in her institution] about the language use, and she has pushed for the use of the word ‘traditional’ to be dropped.

‘I talk about the use of language when you write a text in English and how easy definitions that capture a particular word are often an inferior definition.’ She is pushing that such definitions are not offered, but rather language is used to encourage the audience to do their own work.

‘If they do not know the word then look that word up, as they would in any other language. There has been great resistance to that. But as people come to know more words … you don’t need a definition [because] they became part of our language about art practice,’ she added.

‘A challenge I put to the people I work with is to delete the word traditional and see if what is written needs it to be there. It is hard to work against them and you have to be really conscious of shifting those things,’ Pinchbeck said.

NOT SPEAKING STRAIGHT; THE NEED FOR CRITICISM

Bullen said on writing critically about the work created by First Nations artists: ‘There is a lot of fear – I certainly have it – that is a really big one.’

‘There has been enough of an impact of non-Indigenous writing, and fucking it up from my perspective. I don’t want to keep perpetrating that by writing something negative. But then we end up not having a rigorous dialogue,’ she continued.

‘We need to develop a language through which we can critique our own people.’

Mundine explained: ‘I have written a couple of critical [pieces] when I thought necessary and then you are attacked for ‘attacking’ a fellow Aboriginal or Torres Strait Island artist. The cultural life must reach a point where you can do that.’

Bullen agreed. ‘It is really tough. My secret is I have used the word ‘interesting’ when I don’t want to attack. … My hated word is ‘explore’ when talking about Aboriginal and Torres Strait Islander material.’

Mundine admitted: ‘Often I will say “this work is probably too ambitious”, rather than this work is a complete failure. It’s a really hard line to walk along.’

Moulton continued: ‘To critique each other’s work without being violent, it is about being informed and sensitive.’

Pinchbeck joined the others in saying that it made her feel uncomfortable, but added that, ‘I do think it is something that we are yearning for but there is a hesitancy there because you know how difficult it is for individuals to present that work; you want to support one another rather than cut people down. But the more strength in numbers, and texts out there need to get to a point where we see it as constructive.’

Moulton added: ‘I still think the more traditional platforms of print media and newspapers do not have strong voices – they may have the odd Indigenous writer doing a review, but I think there needs to be more of a push. Digital is the way we will have to go into the future.’

She said she wants ‘to see our mob holding those spaces’, concluding that mentorship is really important for her, and encouraged the sector to think how better they might create these opportunities for Indigenous writers.

Resources mentioned during the panel:

Indigenous Art Writing: Writing Art, Righting Culture was presented by the Power Institute, Sydney University on Friday 13 August, as part of Disruptions: a symposium on the state of writing and research on Indigenous art.  ArtsHub attended as a virtual guest.