How to build a culturally vibrant region 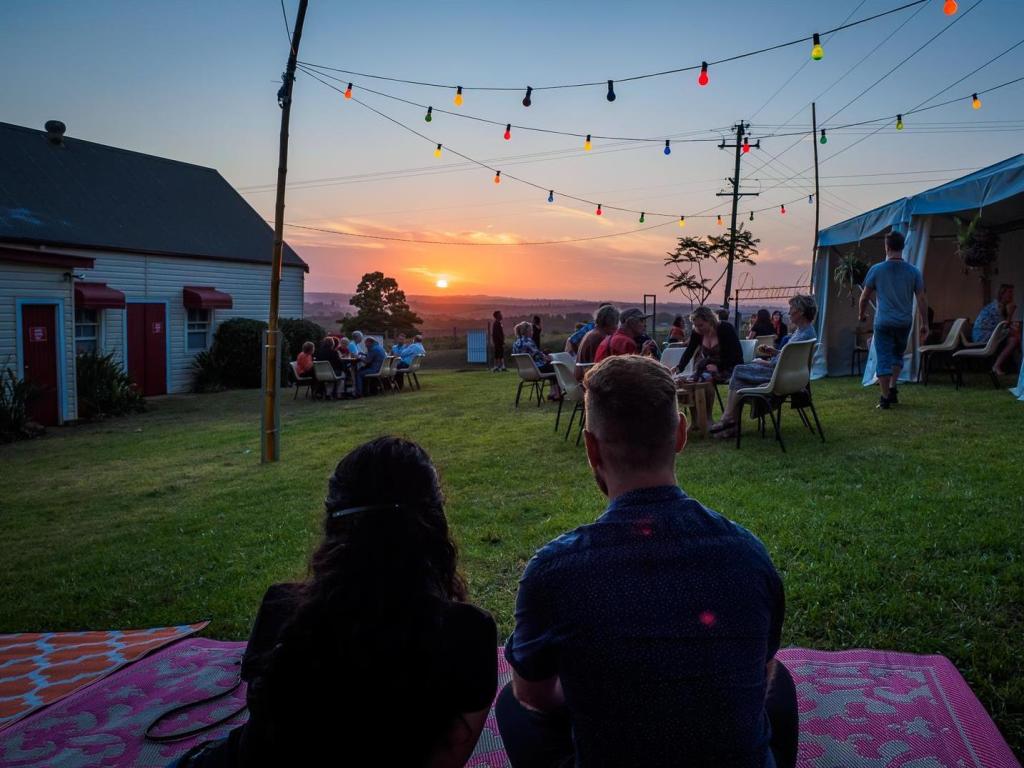 A community hall such as this one in Eureka, near Lismore, can help grow a vibrant regional culture. Photo by Kurt Petersen, taken during the 2016 season of NORPA’s Dreamland.

From Lismore to Castlemaine and Bunbury to Albury-Wodonga, regional Australia is home to multiple districts where cultural activity is flourishing. But what are the factors that have resulted in artistically fertile soil in such locations – and can they be replicated elsewhere?

One of the key ingredients is diversity, according to Patrick Healey, General Manager at Northern Rivers Performing Arts (NORPA) in Lismore.

‘If you think about the Northern Rivers it’s a very diverse place. It has a significant gay population, it has rural and regional, it has professional, and so it attracts people who are drawn to the creative industries – and in fact in this region the creative industries are growing at twice the rate they are in Sydney,’ Healey told ArtsHub.

‘So I think there’s something about the diversity and acceptance of people here that fosters an environment that promotes not just creativity, but people of creative backgrounds to be here and to work and to play and to experiment.’

The growth of the tree-change lifestyle is another factor according to Healey’s NORPA colleague, Artistic Director Julian Louis.

‘There’s a cultural shift; there is a desire by all walks of life to live outside cities, and so regional Australia no longer looks like regional Australia 50 years ago. And therefore the demand for art and culture is equal, if not more so, to cities,’ Louis said.

‘These areas are being born into a new Australia. New cities, regional cities need to be born – and that’s an exciting prospect as a theatre maker, as an artist, to be working in places that are inventing themselves. Telling stories about that new story, but also reflecting on where we’ve come from, where this area has come from to create the new narrative.’

Read: Why you need a tree change

In Albury-Wodonga, the twin cities straddling the Victorian-NSW border, another factor is at play.

Lyn Wallis, the Artistic Director of Wodonga’s HotHouse Theatre, notes the role that history has played in the evolution of a thriving arts ecology which today supports Australia’s national youth circus, The Flying Fruit Fly Circus and the recently redeveloped Murray Art Museum Albury (MAMA), as well as HotHouse and a range of creative industries.

‘Albury-Wodonga has a very, very deep rich history going back right to the Seventies when the first bunch of VCA grads landed here and started Murray River Performing Group and then the Fruities and HotHouse came out of that. ‘But also what I’ve been finding is all the other stuff that’s got really deep roots here like the amateur theatre scene,’ she said.

‘You’ve got to have all of those tent pegs in the landscape and if you’ve got some of them that go down quite deep, that have got a lot of history, it attracts people who are interested in living in an area that has a strong creative life.

‘So I think it’s about history, about what has been built and how you capitalise on that. And then all of those very different pieces of infrastructure and organisations and players form a sort of artistic web where people can bounce from one thing to another. They can come to the theatre, they can go to the gallery, they can participate in amateur theatre. Regions can attract creative thinking through creative people moving into an area because of its history. I think that’s really important because not all regional centres have that,’ Wallis said.

For artists living in regions which lack such history and infrastructure, passion about the place you inhabit can be a key factor in helping nurture a local arts ecology, according to Regional Arts Victoria’s Director, Esther Anatolitis.

‘I think something that makes a big difference … is artists who are really passionately and irresistibly stimulated by the place where they are. And regionally that’s not just about landscape and country and those sorts of physical, tangible parts of place – it’s about really wanting to make your own commitment to practice; something about depth and about time and about getting to know people, and about that kind of tension between home and studio and practice and community,’ she said.

It also requires a significant commitment to collaboration, Anatolitis continued.

‘To go from being a sole practitioner to a collaborator, in a context where you live and work with a smaller number of people and are really interested in and invested in their lives, then what’s going to make that difference in developing [a supportive arts environment], and growing that is personal connection – like actually saying to someone, “Tell me about your practice. How did you make that? Where can I see your work? How do you balance, at the moment, that project with your fulltime job? I have these interests but I’m not sure that my writing, my painting is going to develop – what do you advise?” And then it becomes part of the ongoing conversation in the community.’

Such conversations between friends, peers and colleagues can help grow a supportive foundation from which deeper roots can grow.

Wallis agreed, adding that sometimes all it takes is a couple of people to get such a movement started.

‘Artists just being artists on their own isn’t necessarily going to grow the creative life of the region but where there are people coming together and drawing out other people from the community, you tend to get that happening,’ she said.

‘But it has to be people who are able to think beyond their own practice. In the regions you’ll find lots of individual artists practicing but you need people who can lift themselves out of their practice and see how they can work with others, how they work with people. Two people can make a huge difference if you’ve got the right mindset, if they  have a generosity and are trying to find other people to join with them or to stimulate other activity.’

From attendance to participation

Wallis spoke of the role even the simplest infrastructure can play in providing a focal point for a region’s creative community.

‘When you’ve got some kind of infrastructure in place – even if it’s just like community halls – people can come together to present work in the region … It’s got to start with some kind of critical mass that brings people together and finds those very direct links with community that enables community to not just attend but also to participate. And once you get people involved doing things, not just watching things, one thing begets the next and suddenly that cohort grows and that organisation has deeper links into the community and starts drawing out the creative life of the community more,’ she explained.

Once that creative life begins to flourish, ensuring cross-fertilisation between local and visiting artists can help ensure its ongoing vitality.

‘I think another really key factor in building a creative region is in bringing people into the region, even as visitors – that traffic back and forth is really important, Wallis said.

‘We have artists that live here who we obviously want to connect with metropolitan companies and internationally, all of that sort of stuff, companies like Acrobat. But I just see the impact on a region creatively when you bring people in, whether as visitors or for a residency.’

As regions diversify, sometimes locals can feel left behind as the culture changes to welcome and reflect ‘blow-ins’, as newcomers are sometimes disparagingly called. To avoid this, Anatolitis recommends good old-fashioned politeness.

‘I guess it’s what we think of as those traditional, conventional things when you move into a place – the responsibility is on you to get to know people and to say hello to your neighbours. Hopefully your neighbours will also come and meet you,’ she said.

Getting to know who the community’s leaders are is also important, she continued.

‘And the most important thing of all, especially for any artist who is working in a public space, is to understand as you’ve moving in – whether you’re going to live there, whether it’s just for a short term project – is to meet the elders and understand the local Aboriginal history. Understand that the places and the site you have chosen to work at have a history which is way beyond the longest times we can possibly imagine, and that the first thing is to meet elders and take some time, some really good time, to have a long conversation,’ Anatolitis concluded.

In Lismore, Louis has no concerns about NORPA’s impact on the local community leading to gentrification.

‘NORPA is based in Lismore, and proudly based – it couldn’t exist anywhere else – and in a way what interests me is attracting people who don’t often come to the theatre or don’t often walk into these spaces. So I’m wanting to be informed and inspired by people that are often not in the audience of theatre. So therefore I think what we’re trying to do is create a more diverse theatre,’ he said.

‘I think we’re actually an agency of Australian stories. You hear a lot of companies boast that they’re the only ones dedicated to Australian theatre; well, that’s what we do. We do that so deeply that we create site-specific work that talks to diverse audiences … young, old, family, farmer, wealthy, poor. We’re actually trying to find a way that theatre has an immediacy, so that it’s active. It’s actually alive.’

Read: Free to fail: the joy of risk in the regions

Wallis also stressed the importance of prioritising the local community.

‘Gentrification I think is always overcome by just understanding that if you are not supported by your community, you don’t exist. It’s so clear when you’re in places like this that if you don’t get your community behind you – people buying tickets, getting involved in the life of a company – it’s actually really, really hard to survive’ she said.

‘We might bring an artist in like Ros Oades, a really fantastic artist, and let them infiltrate the life of the community, but we also need to provide a really strong platform for people here who want to perform and who don’t necessarily have a lot of experience, and give them the opportunity to be creative and contribute.

‘That’s the biggest thing, you know – you observing those kinds of protocols means it’s hard to be gentrified if you’re constantly thinking “this is my community, what does it mean, what I can do for it?”,’ she said