Cultural Tourism that breaks down elitism 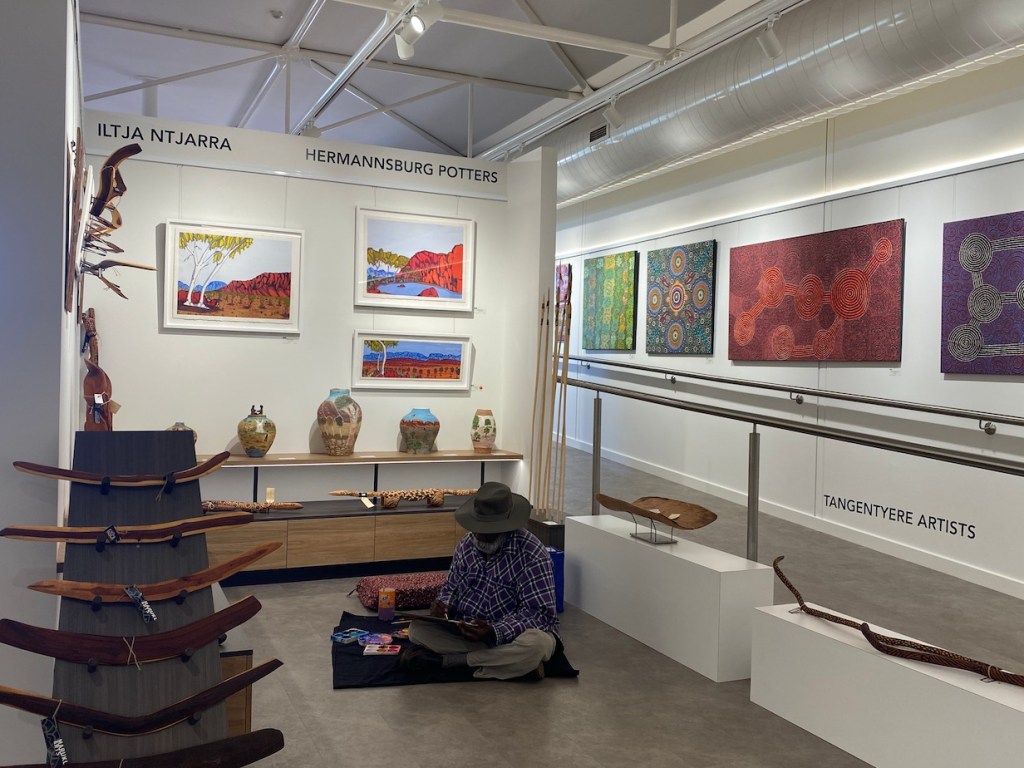 Research by the Australia Council for the Arts (Connecting Australians, 2017) shows that 80% of Australians consider Aboriginal and Torres Strait Islander arts as an important part of our national culture.

How then, do you transfer that sentiment or belief into action?

Much has been said about Cultural Tourism – let’s face it, it’s not a new term, and it’s a ‘whitefella’ one at that.

The number of visitors engaged with Indigenous cultural tourism has grown by an average of 9% year on year since 2013, in what equates today as a $5.8 billion industry annually (Australian Financial Review, 2020).

Recent data collected by the Northern Territory government has further confirmed that 85% of tourists believe the NT is the best place to experience Aboriginal culture; indeed, First Nations arts and craft make up nearly a third of all arts activities attended on overnight stopovers in the NT.

Uluru is number one on the list of destinations, with the highest arts activity engagement in Australia. It is a no brainer then, that placing a gallery – not just a shop selling arty souvenirs – on Country where that connection is physically made, is key to taking that hunger for engagement to the next level.

Matthew Cameron-Smith, CEO of Voyages*, told ArtsHub: ‘It is a bit like greenwashing, if you do it the wrong way.

‘You have got to do it in a meaningful way. For us it starts with employment and empowerment,’ he said.

Last week, the Gallery of Central Australia (GoCA), located at the Ayers Rock Resort within eyesight of Uluru, celebrated its first anniversary.

The central desert resort town of Yulara has 14 retail outlets. Nowhere else is the phrase ‘Exit through the giftshop’ (coined by British artist Banksy and embraced by every major blockbuster exhibition in the world’s greatest big-city locations) more keenly felt. Most of these shops at Yulara (in line with many such businesses across the NT) sell ‘arty Aboriginal souvenirs’.

So how is the Gallery of Central Australia pushing beyond the retail model, and what lessons does it present for cultural tourism more generally?

Being an enabler first

When asked what Cultural Tourism means on the ground, Cameron-Smith said: ‘It’s not just the delivery of an experience to guests; you have to do the base stuff first, and you do that through employment and education.’

To do it right you need to be ‘an enabler,’ he added.

Cameron-Smith said that tourists today have ‘a pretty good bullshit detector as travellers; you can smell it if it’s not authentic.’

It is about that magic exchange between the visitor and the visited, when you go somewhere that has a cultural purpose.

Remember when the self-led travel network airbnb introduced ‘experiences’? It took the idea of Cultural Tourism out of the hands of tour operators and connected it genuinely at a groundroots level, busting open the silos of elitism and economics.

This has especially been a win for the arts and cultural sector, and has forced a rethinking. Now, on top of Segway tours and camel tours in the Central Desert, people can sit down for a free chat and learn about traditional spears, bush-tucker and landcare, storytelling by artists, sky dreamings and traditional astrology. It is a more holistic approach.

‘We have seen a very genuine rekindling of interest with Aboriginal culture, not just art, but culture – school kids are doing Indigenous studies and Australians are going, “This is important, we should learn more”,’ Cameron-Smith said.

‘I hosted some media last week, travel writers, and one had been to 52 countries and one to 46 and neither had been here. We have been a bucket list, but not a to-do list for a long time, and maybe COVID has done us a favour there,’ he continued.

‘When we talk about sustainability in our [tourism] industry it’s very topical things like the bushfires and COVID and emissions that are current, but cultural sustainability is also what makes Australia distinct,’ he said.

‘We believe we have an obligation to help preserve culture,’ he added of tourism providers.

In the rush to sell Cultural Tourism to meet demands, mistakes can be made.

Cameron-Smith said that you ‘never stop learning about cultural safety, and how to be a culturally aware employer. Everyone who starts with us has to do a course, Through the eyes of the Anangu, to get that cultural awareness.’

We are seeing this also in our cities, with arts organisations working to implement Reconciliation Action Plans (RAPs) across their operations, collections and programs.

Putting a tourism lens over its status as a destination venue, the Gallery has worked with community to offer a fully-supported Emerging Artist Residency Program (complete with full time counselors and social workers to provide support if someone has left community for the first time) and a traineeship program that takes a mentorship model.

‘For us, part of that RAP is how we procure art, and ensuring ethical art sales,’ said Cameron-Smith. They have also appointed Rhoda Roberts as Ambassador.

‘Part of having Rhoda is not just as our Ambassador, but to keep us on the straight and narrow too. She has so much integrity, and that is what we want here – to keep it ethical and grounded.’

Equity and enterprise is a big part of that. Bryce Hartnett of Keringke Arts told ArtsHub that being represented by the Gallery, ‘gives someone from a very small place a huge amount of confidence and self-belief, and that is really important in a tiny little place where there is not always good stories.’

He continued: ‘Beyond the people who are adventurous enough to come out to community – and that is a hard ask, and a lot of people are not sure even if they’re allowed to – our audience is only those people we can reach through having relationship with galleries to present us.

‘There is a lot of competition, so when someone say they want to have your stuff that is also a gamble for them. It is a business for all of us,’ Hartnett said.

It was a view echoed by Cecilia Alfonso from Warlukurlangu Artists, who said that finding the appropriate markets is key to cultural sustainability.

‘Our job [as art centre managers] is very much to target the work to the appropriate market,’ Alfonso said, adding that they need to consider both the Indigenous souvenir market as well as exhibition quality.

‘We need to see all calibre and all levels of work. Artists don’t automatically start off with [solo] exhibitions so you need to think of that next generation of artists,’ she added.

Cameron-Smith noted: ‘You have to go that far – to stretch – to have the art centres really engaged … A lot people think of it as one homogenous style. We wanted to find a way to showcase, in a respectful way, the diversity of the art centres and provide a platform for Indigenous enterprise.’

These are interesting lessons for expanding any operations that intersect with culture and tourism, especially when talking regionally, where perhaps the muscle of the tourism operators is less firm, communities are stronger, and the hunger to engage is ever-growing.

‘You have to be trusted, and on the other side of trust is they [the community] will back you,’ Cameron-Smith advised.

Roberts added: ‘These art centres have been prolific in communities to bring us self-determination, and being able to continue that work of the knowledge … Anyone coming to Uluru will have a taste of their world through their lens. It’s not just exhibition but our art is so holistic, and this gives people an opportunity to honour and acknowledge the world’s first artists.’

The Gallery of Central Australia currently exhibits over 300 pieces from 19 of the 35 Aboriginal Art Centres around the APY Lands and Central Desert Region. It is located at Ayers Rock Resort, a short distance from Uluru.

* Voyages Indigenous Tourism Australia is a wholly-owned subsidiary of the Indigenous Land and Sea Corporation (ILSC) and manages tourism and resorts on its behalf.

The writer travelled to GoCA as a guest of Voyages.