Australia reached a new record of COVID-related deaths this week but the news is not tempering arts audiences, who are flocking back to galleries and festivals.
Gina Fairley 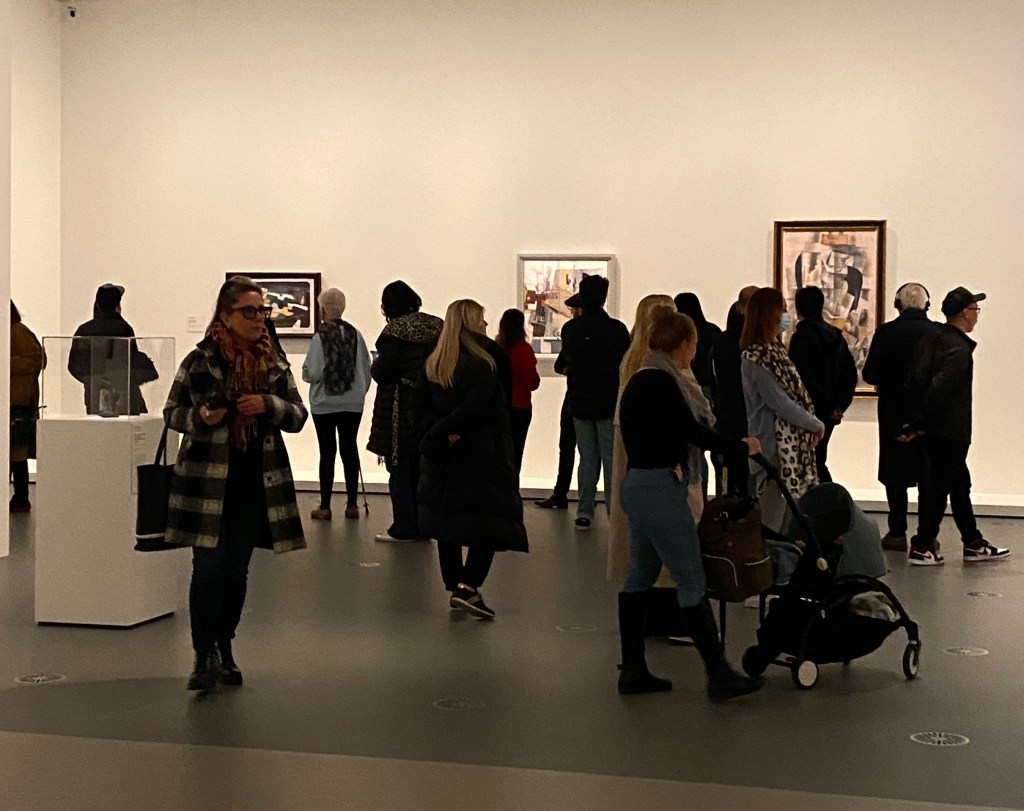 COVID is not tempering audiences with crowds flocking to ‘The Picasso Century’ at NGV. Photo ArtsHub.

While 2020 and 2021 were plagued with cancellations, 2022 has been defined by an ‘all in’ return – unhindered by safety restrictions, number limits, or travel restraints.

In the past month alone, Australia has seen crowds swarming back to events such as Dark Mofo, Adelaide Cabaret Festival, and blockbuster exhibitions such as Chiharu Shiota: The Soul Trembles (QAGOMA), Light: Works from Tate’s Collection (ACMI) and The Picasso Century (NGV International).

On the other hand, arts venues and organisations are frantically having to deal with a programming backlog and process delayed projects still ‘on the books’. And from the visitor’s perspective, there is a kind of ‘just do it’ attitude – the urge to attend events regardless of the semi-expectation of contracting a COVID variant.

Many Australians – though not those who are immunocompromised or otherwise at risk – have embraced ‘living with COVID’, but this week our nation reached 10,000 deaths from the virus: 7,000 of them in 2022 alone. Attendance numbers would suggest that returning, however, is generally viewed as a win.

That said, it’s also clear that festivals and arts organisations have a duty of care to their audiences and should be encouraging measures to minimise the spread of COVID in order to protect the community at large. People’s safety must always come first.

So what are the numbers saying?

Data released over the past two weeks shows that while attendances have not fully returned to pre-pandemic proportions, people are willing to travel to attend major exhibitions and festivals after two years of missing out.

The Ogoh-Ogoh Burning this year attracted a crowd of over 10,000 onlookers, up from around 8,000 attendees last year. ‘This year has been quite the resurrection,’ said Drew Berridge, Dark Mofo Director of Marketing and Business.

However, overall the numbers were down by a quarter. Perhaps that was also due to the recent controversy that has plagued the Festival. Regardless, interstate ticket buyers accounted for 65% of all sales to Dark Mofo, demonstrating the confidence not only to return to festivals, but to travel to them.

‘We are pleased with the results of this year’s festival,’ said Dark Mofo Creative Director Leigh Carmichael. ‘This year we endured some uncertainty around COVID-related restrictions during planning, venue shortages, some staffing hurdles, and changes to programming with artists canceling travel due to ill-health.’

Similarly demonstrating audience’s eagerness to get back to ‘normal’, more than 226,000 people attended events for the 2022 Adelaide Festival earlier this year, exceeding box office targets.

Co-Artistic Directors Rachel Healy and Neil Armfield said: ‘The exhilaration, sustenance and joy that radiated from audiences proved to us time and again that it had all been worthwhile – and that the community was hungry for a Festival that restored and sustained.’

Ticket sales showed nearly a three-fold increase on the previous Festival’s results (ticketed events making up just 40% of audiences) with 11,728 visitors travelling interstate for the event.

More recently, Adelaide Cabaret Festival put its attendances at both ticketed and free events at 40,000, compared to 113,788 punters for the pre-pandemic 2019 festival. This is nearly 60% down, perhaps suggesting that smaller festivals – largely staged at smaller indoor venues – are slower on the uptake.

In contrast, exhibitions appear to be doing well. Gabrielle Chanel, which closed on 25 April 2022, attracted more than 215,000 people to NGV International in Melbourne, while the Botticelli to Van Gogh exhibition at the National Gallery of Australia (5 March to 14 June 2021, in the thick of travel restrictions) attracted 200,975 visitors – an incredible outcome backing onto a period of lockdowns.

Despite this, the NGA still recorded the highest attendance for an exhibition in the past decade, and highest uptake of any audio tour offering in the Gallery’s history.

Read: Will Blockbuster exhibitions be the collateral damage of COVID?

PHOTO 2022 – a festival created on the eve of COVID – also announced this past week that over 155,000 people attended its 2022 events, of which approximately 114,235 viewed the outdoor program, an increase of 40% from its partially staged inaugural event in 2021.

And blockbuster exhibitions opening across these past two weeks – Chiharu Shiota: The Soul Trembles, Light: Works from Tate’s Collection, and The Picasso Century kicked off with bumper attendances, confirming that visitor felt ‘safe’ returning to galleries.

Is being back best for our sector?

Many who attended such recent major opening weekends did contract COVID, making such events ‘super-spreaders’. Should we be flocking back in such numbers?

The simple answer – as many would argue – is yes. The arts need to be generating income, and having visitors back in venues is an overwhelmingly good feeling. But it also needs to be done safely, with the health of patrons and the general public maintained as a priority.

At the opening of Shiota’s exhibition last week, QAGOMA Director Chris Saines said: ‘I think that between QAGOMA and Mami [Kataota, curator of the exhibition] there was an absolutely shared determination that we would bring this project to fruition, that we needed to realise it.

‘And perhaps we needed to realise it even more in the context of a post-pandemic world. While it is not quite “post”, it is certainly not what it was “pre living as we do now” in a world in which we’re more conscious of what connects our common humanity.’

Reinstated almost exactly two years after its original date, Saines also made mention of the return of national media to such blockbuster unveilings.

‘We opened the Asia Pacific Triennial on the morning of Brisbane’s lockdown with no national media,’ recognising the role that sharing these exhibitions plays in driving attendance and interstate visits.

The delay of Shiota’s important survey exhibition certainly has fuelled viewer anticipation, a feeling that the NGA and NGV International are both counting on for their postponed blockbusters.

The NGA has commissioned American artist Jordan Wolfson’s work (for a controversial US $5million), which was to be unveiled in 2020. It will now go ahead in 2023.

The NGV’s much anticipated Pierre Bonnard exhibition, originally scheduled to open June 2020, has also been pushed back to winter 2023.

One argument is that these delays create anticipation – which in turn equates to ticket sales. Destinations like Canberra rely on interstate travellers to its blockbusters, so there is a win in this. The delay has allowed confidence to return – as the recent numbers show.

While Bonnard is on ice for now, The Picasso Century has gone ahead at NGV International, opening this month, also to a full gallery of journalists and supporters. The difference here is this exhibition wasn’t delayed. Like all blockbuster exhibition, it was a long time in the making – ten years to be specific – and was just lucky to fall outside the pandemic window.

A constellation of issues

Simon Wright, Assistant Director QAGOMA, previously told ArtsHub:  ‘Generally speaking, the impact of COVID on the Shiota show has a whole constellation of issues that we are sorting through. Best to think of it like a Rubik’s cube – you move one face and the other side opens up.’

One of the problems was the travel of Shiota’s installation crew, and for other exhibitions, registrars and conservators as couriers on important international loans. Simply, these artworks can’t travel without that support network.

International borders only opened to Australia in February this year, after a two year closure. ‘We couldn’t even get those six assistants across [to Australia] if we wanted to,’ Wright said.

These past weeks we have not only witnessed those crews on the ground, but also curatorial staff and senior gallery management as ‘non essential’ visitors returning, demonstrating the importance of international relationships. We have witnessed that in the festival landscape also.

This underscores the fact that isolation has lifted – i.e. not an individual in their own locked-down home but Australia’s reconnection with the world.

Wright told ArtsHub: ‘One thing this pandemic has revealed is just how many economies there are. The revenue stream is certainly a big thing to consider, and how those costs are offset – and in an ideal world make some money [on those big ticketed shows] to support other projects.’

He believes that the blockbuster has an important role in leading us out of this moment – from a financial level, engagement level and wellbeing perspective.

‘It is really a confidence game,’ he concluded.

This article was updated on 8 July (after its initial publication) to better reflect ArtsHub’s endorsement of a Duty of Care policy across all arts events and venues. We apologise for any offence caused through a lack of clarity in its initial writing. It was not intended. The wellbeing of our community comes first.