Canberra: on the cusp of cultural renewal

Arts organisations in the national capital have ambitious plans for the future, including a new theatre, as the ACT's population continues to grow.
Anne Maria Nicholson 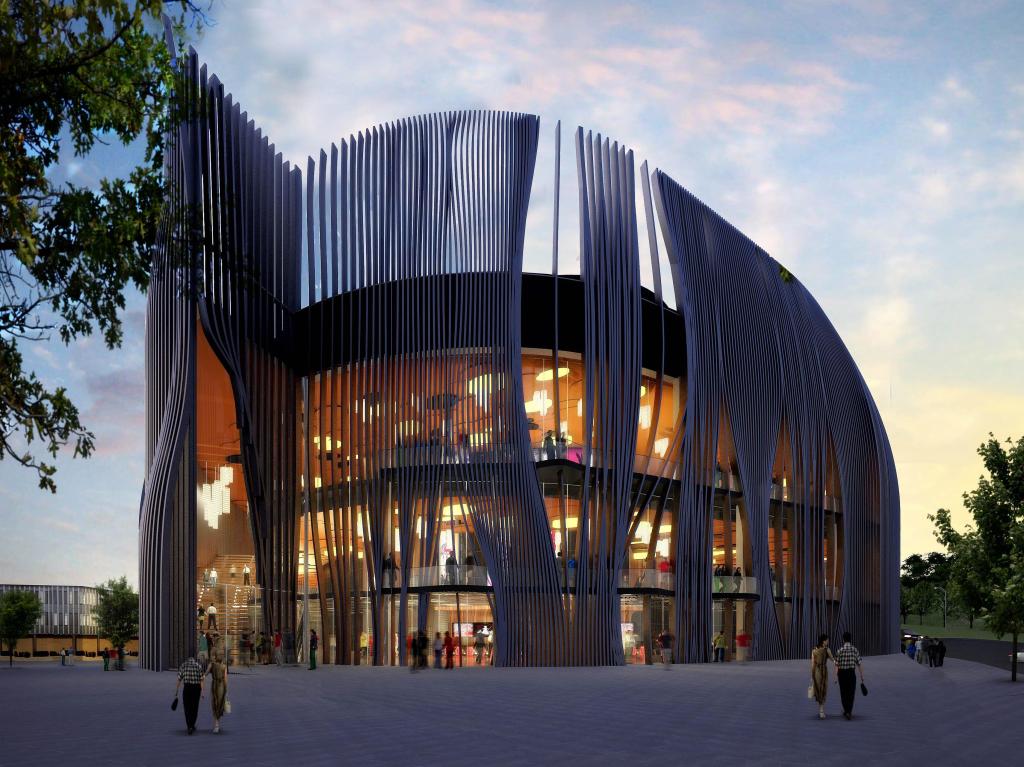 Artist impression of a new 2000-seat theatre for Canberra by Williams Ross Architects and Farzin Lofti-Jam.

A gasp of surprise ripples through Canberra’s Playhouse Theatre as a dramatic turning point in the closing scenes of The Merchant of Venice provokes the audience to switch its revulsion towards the Jewish moneylender, Shylock, to sympathy.

A mid-week evening, the stalls are packed for the newest offering from Bell Shakespeare, whose players have been pulling heartstrings in this venue every year of the nearly two decades since it opened.

‘The Playhouse is my favourite theatre in the country and it’s partly because I also admire Canberra audiences,’ actor and company founder John Bell tells me. ‘They tend to be more educated than in other cities, with more time and more money. And they really appreciate theatre.’

The Cultural Facilities Corporation (CFC), celebrating its 20th anniversary of running the Playhouse and other key city cultural sites, understands this well. But with visitors to its venues last year exceeding half a million, the Corporation is not resting on its laurels.

A grand ambition is in play to dramatically expand cultural opportunities for the national capital’s community and beyond.

Top of the wish list is a 2000-seat, purpose-built theatre to compete with the country’s biggest venues. When the Canberra Theatre opened in 1965, Canberra had only 90,000 people and the venue was state-of-the-art. Now it is showing its age. The goal is to build the new theatre by the early 2020s. A site has been allocated with seeding money to examine the next steps. Among a myriad of challenges is finding the $120-plus million required to build the theatre in the heart of the city.

A stint at the Australian consulate in Hong Kong in 1997 as the Chinese resumed control of the long-held British colony perhaps steeled Harriet Elvin for her future role as a Canberra arts mandarin. Late that same year, the already seasoned arts administrator stepped in to lead the newly created Cultural Facilities Corporation.

The Playhouse was nearing completion and the older, bigger Canberra Theatre was put under her watch. Construction was underway on the Canberra Museum and Gallery, which opened in 1998, a $14 million ‘link’ connected the foyers of the theatres and Canberra Library in 2006, and a clutch of historic properties around the ACT completed her portfolio.

‘I’d just finished an MBA when I came into the role, and valued the chance to apply business disciplines in the cultural sector, to allow the arts to flourish,’ Elvin explains.

‘We’re now positioning our organisation to cater for the cultural needs of a population of 900,000 and growing in the catchment area. Canberra is undergoing major urban renewal in the Civic Square/City Hill precinct and we want to take a broader leadership role in that to make the city a much more vibrant place.’

She might present as mild-mannered, but this CEO and her team have survived three major government reviews and scrutiny that could have easily derailed the organisation or subsumed it into a government department. Instead the CFC has emerged stronger, buoyed by rising audiences and healthy revenues.

Annual revenues have leapt from $9 million in year one to $19 million today, with the own-sourced proportion of this rising from 29% to 54%. ‘I like to think it’s a sign we know what we’re doing,’ she says.

For the casual visitor to Canberra, it’s difficult at first to understand the city’s unique split personality. As Australia’s capital, it houses a slew of prominent national galleries and museums that cater for tourists and locals alike. But it’s generating stories, exhibitions, history and entertainment for the home crowd and visitors looking for something extra, that makes the CFC tick.

There’s not much about showbiz that the gregarious Director of the Canberra Theatre Centre, Bruce Carmichael doesn’t know. He cut his teeth shepherding rock bands in Sydney in the Seventies before becoming the tech whiz at the Canberra Theatre and Playhouse.  Since he took over the top job nine years ago, he has bumped up attendance to around a quarter million a year.

‘You know when the phones start ringing, you’ve started something,’ Carmichael tells me while describing the MAMMA MIA! phenomenon that is currently blitzing town. A national tour of the stage musical is kicking off in the capital as part of the theatre’s aspiration to provide large-scale entertainment for the Canberra region.

‘There’s been much less funding for performing arts over the last 20 years and I see it as a duty to generate as much money as possible and to put it back in,’ Carmichael says.

A case in point was the multi-year residency by community arts and social change company Big hART. In 2013, the company premiered in Canberra a show about deaths in custody, Hipbone Sticking Out, made with the WA Aboriginal community of Roebourne.

‘The people came all the way here to present this show and it was cathartic for them to tell their story in the national capital with a few federal politicians in the audience,’ Carmichael recalled. ‘This was a big risk, and for me it was very emotional. I had a tear in my eye.’

Proponents of the new theatre point to the competing demands on the Canberra Theatre, which doubles as the town hall the national capital lacks. Constant booking conflicts occur between local groups and major stage shows. As they see it, the existing theatre could largely be turned over to local use.

The reality is the theatre is showing its age and can’t host major operas, ballets and musicals.

To demonstrate its inadequacy, John Hindmarsh, both the CFC Chair and the city’s building construction titan, recalled an unintentionally humorous moment two years ago during the theatre’s 50th anniversary production of The Australian Ballet’s Giselle.

‘As I watched, a couple of times a few of the dancers flew off into the wings. There wasn’t enough room for them on the stage,’ he said.

Hindmarsh, however, talks bluntly when it comes to the future cultural planning and ‘shabby’ state of the civic heart that has been completely overshadowed by nearby commercial development.

‘There’s no point building a theatre in isolation. It has to be part of a linkage to the cultural precinct.’

Building civic pride is uppermost in the mind of the CFC’s strategic manager Shane Breynard.

I first met Breynard at an international gathering of museum specialists in Holland at MuseumNext in Rotterdam earlier this year. Also the Director of Canberra Museum and Gallery (CMAG), he was spruiking the cultural achievements of Canberra to a largely European and American conference crowd. He then oversaw the opening in London of the Museum’s first international export to Europe, Peace, Love and World War: The Denmans Empire and Australia 1910-1917, a quirky exhibition about Australian Governor General Thomas Denman and his wife, Trudie.

As Canberra grows – it’s now nearing 400,000 people – it’s shaking off its image of being an Anglo-dominated culture, with a cosmopolitan population boosted by a large diplomatic community.  I was surprised to learn that the second most spoken language here is Mandarin.

But the most valuable exhibits inside CMAG are decidedly homegrown. The artist Sidney Nolan donated a priceless collection of 24 paintings, including many of his early Ned Kelly images, to the Federal Government. They were an early test of the CFC’s mettle when it tried to relocate them, against the wishes of the artist’s widow, Lady Mary Nolan, from a special gallery at the historic rural homestead of ‘Lanyon’ because of declining visitors, security concerns and bushfire threats.

The very public stoush ended in an emergency dash when a bushfire did eventuate. The paintings were rushed to safety in the city where they will remain permanently. The Nolans sit alongside a vibrant program of contemporary exhibitions at CMAG, reflecting a creative population that, as the Australia Council for the Arts tells us, is more likely to creatively participate in the arts – by making and doing – than the average Australian.

One evocative object from CMAG’s 6,500 strong collection. A Miele dishwasher from a suburban Canberra homed destroyed in the January 2003 Canberra bushfires. [CMAG Collection]

Behind the scenes of the museum, Breynard shows me some of the 6,500 objects amassed in just 20 years, each telling a story, including that of bushfires, a recurring threat for the otherwise very safe community. A burnt dishwasher, topped with melted glass and packed with blackened china and pots, evokes Canberra’s devastating 2003 bushfires. Reminiscent of a Pompeian artifact, the machine captures the moment flames roared through the pine plantations marking the city’s boundaries and on to the suburbs, stealing lives and properties.

‘We show this regularly in the museum. People are drawn to it because it’s so familiar but so evocative of that time. It’s a symbol of a secure domestic life that went up in flames. And it’s a very Canberra story,’ he said.

The name of Canberra itself is also a point of local pride, according to Breynard. ‘It’s an Aboriginal word popularly held to mean “meeting place” and this is the only capital city in Australia to have an Indigenous name. Every time I hear anyone around the world say Canberra, I think it’s fantastic. The name stretches back tens of thousands of years.’

The museum has references to the area’s Aboriginal heritage and Ngunnawal and Ngambri language groups on show. But Breynard is painfully aware that more must be included.  And there’s an obvious place to start.

When you approach Lanyon homestead outside of the city’s southern limits, the land in front of you suddenly transforms from manicured Canberra suburbs to pristine Australian bush studded with white-trunked eucalypts, through which flows the glistening ribbon of the Murrumbidgee River.

In one corner of the property a class of six-year-olds is role-playing the lives of convicts, inspired by the homestead’s builder, a freed convict John Wright, who with his friend, John Lanyon, settled this place in the 1830s.

Inside the meticulously conserved heritage-listed house, visitors roam from room to room learning about the domestic life of settlers in the colony’s early days.

Lanyon Homestead, in Canberra’s south connects visitors with the pre and post settlement history of the Canberra region. Image supplied.

Penny Spoelder, the CFC’s Director of Lanyon and two other historic venues, said: ‘People are just bowled over when they first come [here] because they can’t believe how old the buildings are. They love the beautiful natural light here and exploring the outbuildings.’

As yet, few of the Canberrans who flood to the homestead and its café at weekends and for weddings are aware of the area’s rich Aboriginal history. Save for a protected ‘canoe’ tree on the property (a tree with its trunk carved out long ago to provide wood for an Aboriginal canoe) there is little immediate evidence of the region’s millennia of settlement. Even the foreboding mountain across the river which overlooks Lanyon bears the name of a colonial criminal. Mt Tennant was named after bushranger John Tennant, who between robberies hid out on its slopes with his gang in the 1820s.

‘This land has been occupied by Aboriginal people for tens of thousands of years,’ Breynard says. ‘It’s very important to show how those stories are woven into the modern Canberra story. That’s a major challenge for us all.’

An abridged version of this story has previously appeared in The Canberra Times.

Anne Maria Nicholson is a Sydney-based journalist and novelist and was formerly National Arts Reporter for ABC-TV.