Who made the FIVEX Billboard Art Prize cut?

From native bird calls to sonic visualisations of public space, the inaugural swag of finalists for the Fivex Art Prize will capture the imagination of commuters at billboard proportions.
Gina Fairley 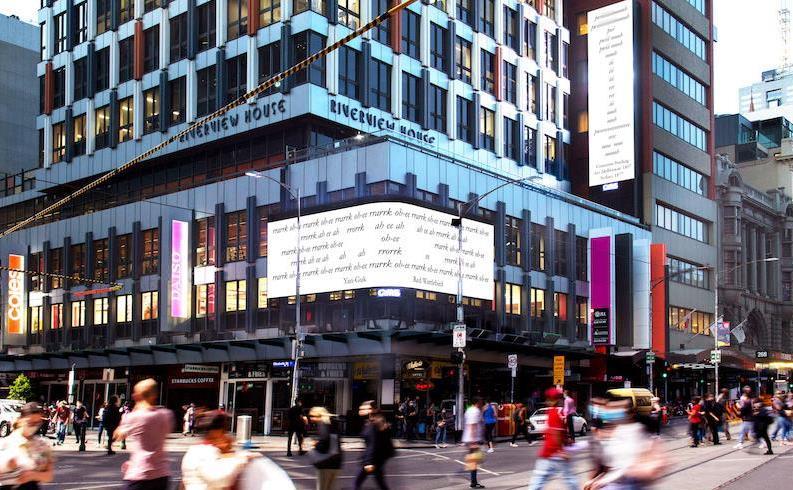 Billboards – we see them every day – but have we ever considered them as art? Probably not. Until now.

Six Australian artists’ works will feature on Melbourne’s most prominent billboard real estate – the corner of Flinders and Elizabeth Streets, opposite the iconic Flinders Station – where they will capture the imagination of commuters.

The Prize is the first of its kind in Australia, conceived of and presented by The Fivex Foundation.

It is not exclusive to visual artists, but aims to celebrate that zone of fusion between media artists, graphic designers, street artists, photographers and architects, in a more realistic 21st reflection of art making.

The organisers said the hope was to push beyond the trend to compartmentalise commercial designers and artists, and recognise that it is all creative practice.

The six to finalists were chosen from more than 520 entries nationally. They are: Magdalene Carmen (VIC), Catherine Clover (VIC), Phi Do (VIC), Deborah Kelly (NSW), Daniel Kotsimbos (VIC) and Kent Morris (VIC).  The finalists in this milestone project each receive $1,000.

The Fivex Art Prize awards $30,000 to the winner. But in a surprising twist, the inaugural Prize has been awarded to two artists, Catherine Clover and Daniel Kotsimbos receiving $15,000 each.

A STRATEGIC MASH UP

He said that key to the project was, ‘subverting expectations and surprising audiences.’

‘We challenged artists to stretch their thinking – hence the Prize tag line ‘billboard art reimagined’ – to be keenly aware of the site context, asking ‘how can my work engage viewers when presented within a continuum of changing advertising imagery in an exhibition space above Melbourne’s busiest intersection?’’

We will soon discover.

Delayed from its proposed March unveiling due to COVID-19, the Prize has been announced by Melbourne’s Lord Mayor Sally Capp (14 December), and the works will be showcased on the QMS digital billboards until the end of January 2021.

Several of the finalists have taken their cue from the site itself, such as media artist and inaugural Fivex co-winner, Daniel Kotsimbos’ work, Peak Frequency, which presents sonic patterns recorded at Melbourne Square Crossing as a data visualization.

He explains: ‘the artwork is essentially a spectrogram of the billboards’ location [which] shows time represented horizontally on the x-axis, and sonic frequency on the vertical y-axis … It’s a hypnotic representation of a public space.’

Similarly, designer and illustrator Phi Do turned to the city’s geometric layout with his stylised work, Move in All Directions.

A particular cheeky intervention is the work of designer, photographer and poet Magdalene Carmen, who fuses distinct road and construction signs with smart phone aesthetics, in her piece Hello Sign / Hey! Sign.

She says: ‘Mobility, a plethora of visual media and micro messages mark the 21st century, its zeitgeist perhaps best summarised in the graspable beauty of the mobile phone with its apps, containing our whole lives.’

It is a fun play with many waiting at the crossing diverted from their hand-held screens, to the big screens of the billboards.

There is also an environmental thread and messaging across the finalists chosen.

Artist and inaugural co-winner, Catherine Clover’s Song Cycle is based on songs of the Red Wattlebird and the Common Starling, turned to phonetic words for bird field guides.

She explained: ‘These seemingly nonsense texts incorporate phonetic words used by naturalists to approximate a bird’s call or song … Hopefully, viewers will find it irresistible to sound out the calls as they pass by.’

The co-winners, Clover and Kotsimbos’ works could be described as the most abstract of the six finalists in the way they are evocative of sound works rather than just purely visual expressions, and playing off the sound of the built environment to raise the broader questions of what is art and how it impacts us on a daily basis just walking streets, or rushing to work.

Artist and curator Kent Morris also takes his cue from Australia’s native songbird in City of the Future, which turns to the Magpie to highlight the Indigenous history of Melbourne’s landscape and its future.

Artist Deborah Kelly, known for her striking collages, captures the complex entanglement of city life whilst reminding viewers of the natural world’s resilience and promise of harmony.

Her piece Evolutionary Exuberance has been created from elements collected over three years, and ‘seeks to enchant the viewer with a shimmering array of complex inter-species entanglement.’

‘As history narrows and the world warms, this artwork is a balm and a herald of recovery and resilience,’ she added.

Ambitious is a good work to describe these finalist works. The public will encounter them as a kind of a jolt, perked by the anomaly: ‘That doesn’t look like an advert.’

Cavallaro added: ‘You are not expecting to see artworks when looking at billboards. A primary aim of the Prize is to highlight the interplay between vernaculars of art and advertising, and the creative trends that oscillate between them, while riffing off the perceived conditional space for art in a gallery or museum.’

Unrelated to the Prize, but now serendipitously coinciding with it due to the COVID delay, is a new public artwork by artist Gary Deirmendjian.

Commissioned by The Fivex Foundation for the Digital Facade in Melbourne’s iconic Federation Square, pulse is a subtly beating colour field of light that envelops visitors for several hours most evenings until 31January 2021.

Deirmendjian said the ‘artwork offers a tangible expression of the city’s strengthening heartbeat after prolonged COVID lockdown, filling the public space with gentle pulsing light that spills out through the perforated facades and reflects on passers by and the surrounding buildings.’

The Fivex Foundation is a philanthropic enterprise dedicated to initiating and supporting a range of community and cultural programs.

The Fivex Art Prize will be an annual event, with the desire to grow this unique project internationally. The Prize is sponsored by the digital billboard company, QMS Media.

All of the finalists’ works will be individually exhibited daily, interspersed among commercial advertising content, until 31 January 2021. The works will also be presented collectively, in one-hour group screenings without advertising, at 12pm–1pm on Saturday 19 and Sunday 20 December (and similar weekend schedule thereafter until the end of the exhibition).