Turning a collection into a community hub – Artbank opens its house

With a party to unveil its new Collingwood headquarters, Artbank turns the warehouse model on its head putting accessibility at the heart of its future.
Gina Fairley
[This is archived content and may not display in the originally intended format.] 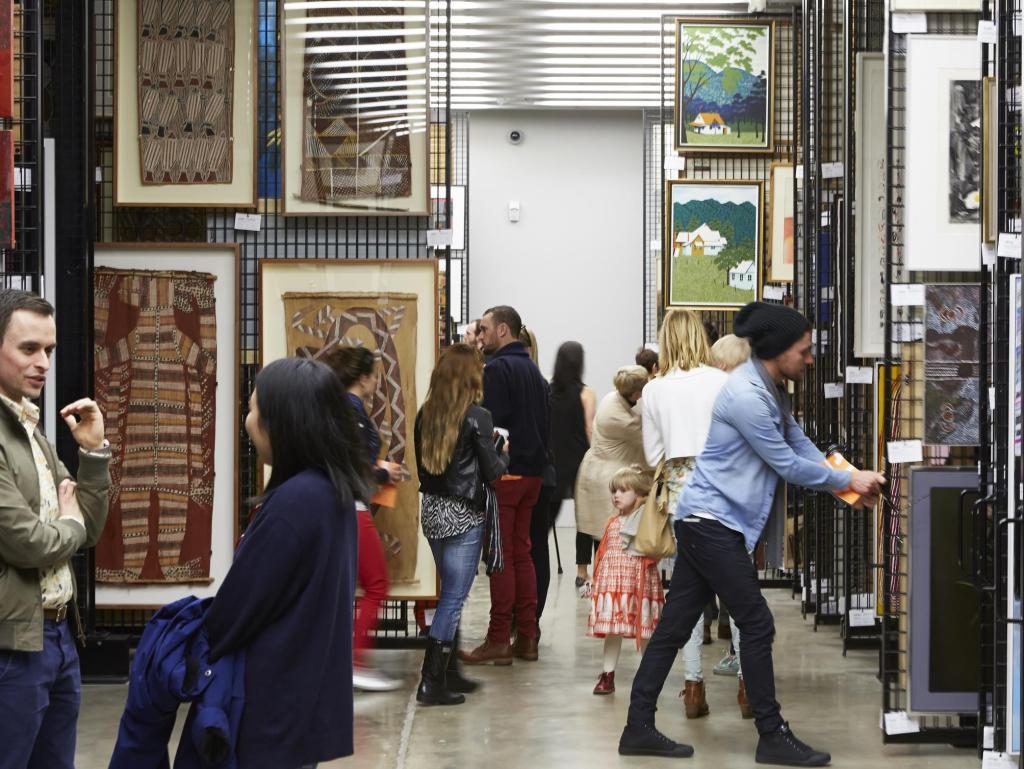 Moving house is arguably worse than having teeth pulled at the dentist. Imagine, then, the challenge faced when that move involves the relocation of over 2,000 works of art.

This is what Artbank has just done. After 14-years in the Melbourne suburb of Armadale, it will open its doors with a new custom-fit warehouse in Collingwood that flips the design and gallery model into an all-access democratic hub.

To celebrate, Artbank is hosting a house-warming on 24 March from 11 – 4pm, complete with music courtesy of DJ Tanzer, street food from Beatbox Kitchen, a new large-scale wall painting by Sam Songailo, artist, architectural and curatorial talks, giveaways and more! You’re all invited.

Register to be part of the fun.

The collection is central to Artbank’s new headquarters at Collingwood; Architect’s renderings, supplied

Why access is more than just leasing a collection

Because Artbank describes itself as a ‘democratically available collection’ we wanted to ask Director Tony Stephens why that branding is so important.

‘It is for a number of reasons. Accessibility underpins the whole principal of Artbank, and this new space. You don’t have to have money to engage with Artbank; being democratic is about everyone having the same right to the work, whether they want to rent or just engage with it as a community group or having a look through the racks. This facility allows that to be the case.’

Stephens said that you can rent an art work for as little as $165 a year, but recognised that can be the tipping point for many families or students. ‘We want to level the playing field. We want to walk the talk of accessibility.’

Stephens explained that the Collingwood headquarters has been designed so that the heavy-steel racking system for the collection is central to the space, with everything orientated around it.

Artbank worked collaborative with award-winning Collingwood architecture studio Edition Office to fit-out the warehouse. ‘The architecture is going to knock you backwards,’ said Stephens, adding that the racking system has been designed to sit as a sculptural object central to the space.

‘The collection is our core activity, and by extension is the identity of Artbank. It has been integrated into the building so that it connects staff to the work they do – a visual link. And we have created a beautiful multi-use space to engage with stakeholders and audiences, not just a gallery program.  The normal frame of the traditional gallery has been done.’

Architect’s renderings of the special events and community space that is pivotal to Artbank’s new Collingwood headquarters; image supplied

Four years on from the development of the Sydney site – with a gallery – Stephens said they want to build on from that concept and turn to community-led activation of the Collingwood space.

Stephen’s described is as a kind of ‘foregrounded / backgrounded interaction – people may not rent from us, but see work on a client’s wall. So with this space we are going to enact the same thing. We will allow various community to use the space, so that the collection will feel community owned and community activated. It is about decreasing the distance between the audience and the makers.’

Also new to Artbank is a non-residential Studio Program.

Stephens explained: ‘We will develop a call out program where we will ask people how long and why they need the space and then we will put it together like a jigsaw. We don’t want to get locked into a “apply for a 4-week, 6-month residency” scenario. We want to be able to respond to the needs of artists as they arise, and we will support their stay with a bursary. That will kick off with a call out in May, with the first starting off in the new financial year.’

‘One of the reasons we made the move in Melbourne is that our capacity to engage with local stakeholders was limited. People wanted to be part of this, but we couldn’t get any more work physically in and out of the office – a simple supply chain problem.’

The Melbourne facility will also alleviate some of the storage congestion experienced in Sydney as – with Artbank buying several hundred artworks a year – the new site allows for more works to be on the rack, visible and accessible.

Stephens said that the staffing at the new Collingwood site has been growing in anticipation of the move, and will eventually include an installation team which would ensure a high quality Artbank experience from start to finish. ‘We are on a growth trajectory,’ he added.

Artbank Open House will be held in Collingwood this year on 24 March – don’t miss out on the fun; image supplied

‘What we have found from similar events is there is a huge amount of curiosity just to see what this is all about. We have found that there is a transition into client that follows at the smaller end of the leasing market. But mostly the Open Day is about encouraging people to explore their own imagination. We can all articulate what we like and don’t like, and that is totally valid,’ said Stephen.

‘At Artbank, we subscribe to the idea that art is mirroring what is going on in our community.  And if we stopped responding to opportunities around us then we would fall into irrelevance.’

The ideal will come to life at the Artbank Open House. This is an opportunity to go behind-the-scenes and view one of the largest collections of contemporary Australian art in the world.

The Artbank Melbourne HQ is located at 18-24 Down Street, Collingwood.

Artbank has on street parking and is well serviced by trams and buses.

Register to be part of the fun.