Starting her painting career at 64, Aurukun artist Mavis Ngallametta became one of the most sought-after contemporary Australian artists. Learn why in this QAGOMA survey exhibition.
Gina Fairley 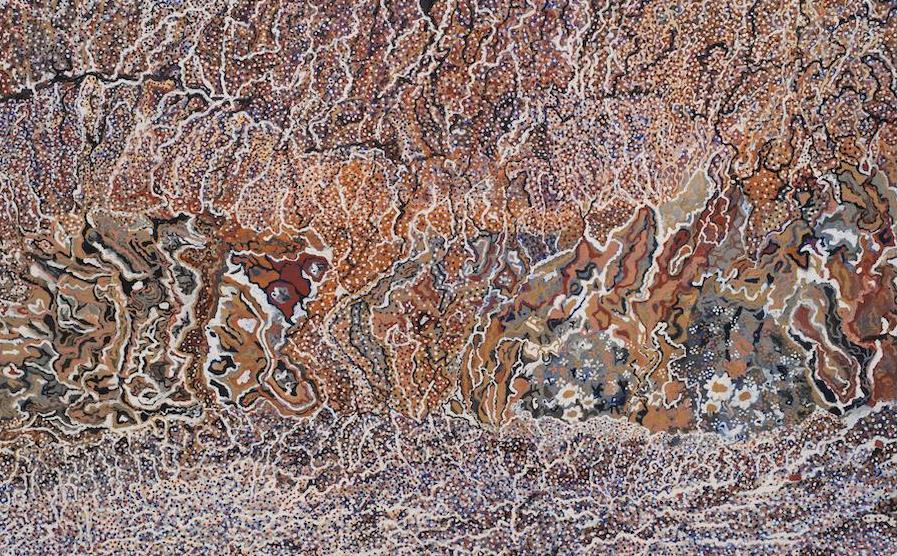 UPDATE: A lot has changed since we first published this story – both the Queensland Art Gallery and Gallery of Modern Art have been temporarily closed to the public in response to government restrictions to combat COVID-19. Mrs Ngallametta’s exhibition, however, can still be viewed online at www.qagoma.qld.gov.au . As QAGOMA celebrated its 125th anniversary this week, it is committed to continue bringing the best of its programming to you in new and refreshing ways.

When most people describe Aurukun artist Mavis Ngallametta (1944–2019) they say she was ‘larger than life’; someone who was always singing and having a joke.

It is not surprising then, that her first survey exhibition at the Queensland Art Gallery (QAG) is titled after a song – Show me the way to go home – which captures both her love of Country, and her enormous personality.

‘Whenever she travelled she embraced the moment of being away, and enjoyed new experiences that her art afforded her, but her life was always with her community, her Country and her family. While she had an outgoing personality, it was balanced with this longing to be home,’ explained Bruce Johnson McLean, Curator of the exhibition and former head of Indigenous Australian Art at Queensland Art Gallery (QAGOMA), where the exhibition opens later this month.

An elder of the Putch clan and a cultural leader of the Wik and Kugu people of Aurukun, in Far North Queensland, Mrs Ngallametta is one of the most widely celebrated senior community-based artists in Australia, despite starting her career at 64.

‘I do see it as a mark of bravery in some way,’ said McLean of her decision to give painting a go at that age.

McLean said that while Mrs Ngallametta painted most days, she didn’t produce many paintings as they took weeks to compose.

‘There have been very few occasions where more than three or four paintings have been seen together; almost as soon as they were painted they entered collections. The detail in them is exquisite.’

This rare survey at QAG includes around 50 artworks, including some early baskets, which she was first known for.

‘She was known as a master weaver, but she didn’t call herself that, but was sure to let you know others did,’ said McLean. ‘However, it was through her paintings that she had pleasure in telling the stories of places that were important to her.’

He described her style: ‘It is landscape painting, but not a flat 90-degree view like in European landscapes or the bird’s eye view we expect of Aboriginal painting. It is almost as if you are at 45 degrees; a style that (often) starts at the beach and recedes back over the cliffs into the mountains. It is a really unique perspective and something she devised herself, and it comes from knowledge of the space – walking it, understanding it.’

Shown for the first time will be a timely suite of powerful paintings about bushfires. ‘She saw that as a thing of teaching – not by telling, but by watching and learning,’ said Gina Allain.

Allain was first introduced to Mrs Ngallmetta in 2007 when her husband was the manager of the art centre at Aurukun and invited her to do some women’s painting workshops. They continued to work closely with her until her death.

‘Mavis was so proud to have this show; she knew she was dying and that she would miss it …I have always tried to think what she would be saying (about the show). I think she is rapt,’ she added.

Art centres as a cultural space for Aboriginal women only came much later, said McLean. Doing a survey of Mrs Ngallametta’s work intends to balance that narrative and give a voice back to the women in communities.

‘The men of Aurukun were so well-known for their painting designs and the market was expecting that from the art centre, so the women didn’t have much of a space,’ he continued.

Now they have separate making spaces to encourage both men and women to participate.

‘Gina facilitated those first workshops to bring women into the centre, including Mavis – it was a relationship built around trust,’ said McLean.

Allain added: ‘She was brave. She really wanted the young people to see that they can do things and you can share your culture too.’

‘Show Me the Way to Go Home’  presents a group of paintings from those early workshops in a number of different styles, which Ngallametta eventually combined to become the type of work she was known for, said McLean.

‘(Gina) was present for all her paintings and she knew the intricacies of the work, so it was really important for me that while Ngallametta didn’t have a voice, the person she worked so closely with made sure of her presence in the exhibition,’ he said.

Towards the end of her life, Allain said Mrs Ngallametta pulled back from painting at the centre. Her paintings had become too large, and she felt she had done her time as the centre’s Chair, and wanted to focus on her big works. Perhaps she sensed her time was near, and her priority was to share her stories.

Mavis Ngallametta, Mo’Yakal (White and yellow wattles in flower) 2008. Gift of the artist through the Queensland Art Gallery | Gallery of Modern Art Foundation 2015. The estate of Mavis Ngallametta.

Ageism is not a concept for Aboriginal artists

‘The ageism thing is so different in Aboriginal culture – the women are still women – they still have boyfriends and are flirtatious. They are very strong,’ said Allain.

McLean continued: ‘Within Aboriginal culture, more generally, the idea of someone 65, or 85, just shows the attitude towards elders; this is a culture that respects senior people with knowledge and they have that authority to tell stories, whatever way they deem appropriate.’

He added: ‘Mavis’s basketry in a fancy missionary style was just exquisite, but she found something new with painting, and there is something brave about that – being a grandmother who embraces a whole new way of life – it took her to places she had not otherwise gone. She celebrated that all the time.’

He concluded: ‘I just like to think she was a really exuberant woman and that in her small paintings and weavings she struggled to fit everything in. If she was telling you a story, it was a big story, and so she found the scale that spoke to the person she was.’

Mavis Ngallametta: Show Me the Way to Go Home is a survey exhibition that celebrates of  her life’s work, and it opens at the Queensland Art Gallery from 21 March – 2 August 2020.