A new festival deserves a new approach to the way artists share and discuss the ideas that inform their work.
Richard Watts 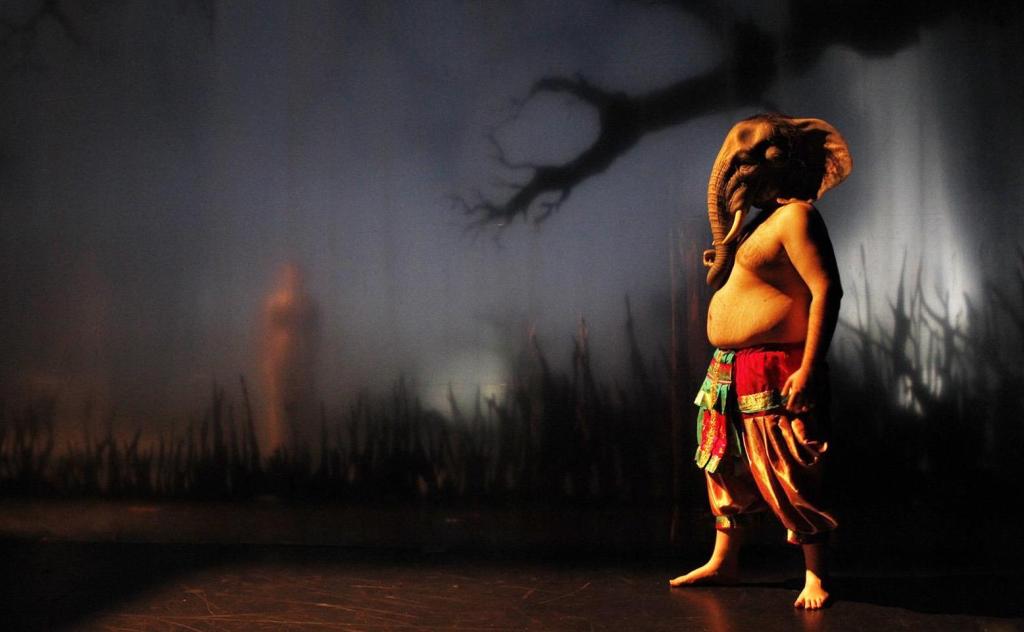 Back to Back Theatre’s Ganesh Versus The Third Reich is the subject of an episode of the RISING Podcast 2021. Photo credit: Jeff Busby.

RISING, Melbourne’s recently launched winter festival (running from 26 May – 6 June) has partnered with Litmus Media to create a new podcast series in which some of the festival’s key artists contextualise their work and its origins.

In a series of intimate and revealing conversations, artists discuss the hows and whys of making work for RISING. Among those offering insights are composer and soprano Professor Deborah Cheetham AO, drummers Tony Buck (The Necks) and Jim White (Dirty Three) and Back to Back Theatre’s Artistic Director Bruce Gladwin and performer Scott Price.

Each conversation is guided, contextualised and steered by a series of guest interviewers and commentators such as media personality Johan Safran and Three Triple R radio host Woody Mcdonald, with careful editing and sound design adding to the rich listening experience.

ArtsHub: Does the intimate nature of audio make the podcast format the ideal way to communicate complex artistic ideas to the listener?

Mahmood Fazal: I think so. Podcasting, in general, has shifted the way we understand culture because of its conversational tone. When it’s done, well there isn’t any lecturing, it’s a mutual effort to understand a subject through meandering conversation.

For the RISING podcast, we wanted to maintain the conversational style of podcasting while adding the sensational experience of being presented with a work of art; through music, sound foley and archival material.

In my view, arts podcasts should not be about translating the artistic ideas to the listener, their focus should be about presenting the ideas or problems in a different or concise way.

AH: RISING is exploring the idea of ritual, ceremony and the ephemeral in art, among other themes – was it a challenge to capture such ideas in the podcast format?

MF: It was challenging, and it’s not always possible. Podcasts can offer an insight into a theatre work, but to be in the room watching drama unfold is something else entirely. All of those ideas – rituals, ceremonies, and ephemera are grounded in experience, both collective and subjective.

In our episode on The Rivers Sing, Deborah Cheetham was able to get closest to capturing the rapture of the festival, as a cathartic remembering of a moment in place and time. I think there are echoes of those ideas in every episode, but if you want to feel the energetic entanglement that comes with viewing art in public – you have to visit the festival!

AH: You were given the freedom to experiment conceptually and creatively with this podcast series, rather than stick to a tried-and-true formula. How did that freedom help shape the RISING Podcast 2021 series?

MF: We wanted to break down the essential problem each artist was trying to explore in their work but we, like the artists, didn’t feel like we were in any position to offer answers. For The Dispute, a theatre work in which children discuss divorce, we wanted to explore the idea of children’s agency by having them ask the theatre directors about their ideas.

In our episode for Back to Back Theatre, we weren’t as interested in the story of the Hindu god Ganesh reclaiming the Swastika from the Third Reich, as we were with the tricky question of who has the right to tell a story, so we passed the microphone to diverse candidates from every viewpoint and heard them out.

AH: Tell us about the decision to have different hosts/interviewees for each episode, instead of one established, authoritative voice: what did you hope this approach would bring to the series?

MF: The best conversations spark when people really want to hear one another. So when we were thinking of how we could immerse listeners into the world of the artwork, it became obvious that the traditional narrator or arts journalist would only be a distraction.

In our Deep Throat Drive In episode, Sandi Sissel interviews Annie Sprinkle, [with] extraordinary reminiscence from two iconic artists who have been exploring radical feminism on screen since the 70s.

Children performing in The Dispute ask questions of their directors in the RISING podcast series. Image supplied.

AH: Listening to Deborah Cheetham pronounce the names of rivers, telling us how she was taught to speak language ‘gently and with great respect’, gives us an emotional connection to the art she is making – how important is that aspect of emotional truth-telling in the RISING podcasts?

MF: It’s everything. We had to be really thoughtful and considerate when handling the weight of Deborah and Daniel’s emotional truth-telling. At every turn of their conversation, the burden of colonisation was revealed in a different heart-wrenching context. I learnt a lot about how trauma endured by land can deeply affect its Indigenous peoples.

AH: We don’t often get to hear drummers speak when bands are interviewed, let alone hear them in conversation with one another about their craft. Why did you want the RISING podcast series to experiment with tried and true interview traditions?

MF: The idea came from radio presenter and music curator Woody Mcdonald who wanted to dissect the origin stories of two iconic instrumental bands who happened to be fans of each other’s music. To hear these subversive musicians in conversation about their technique, reaching the same point from opposite ends, while casually celebrating their love of Metallica’s drummer Lars Uhlrich, was just pure magic.

AH: How important is it that the RISING podcast series allows people to bypass barriers of geography, access and cost by taking the art and the art-makers directly into the listener’s mind?

MF: In light of the pandemic, I think artists want to explore podcasts as an extension of their work or an exploration of some of its elements. For RISING, this podcast is something like a bridge that invites listeners into the world of the festival.