The Numburindi Festival returned this year to host three nights of song and dance for a diverse Northern Territory community.
Celina Lei 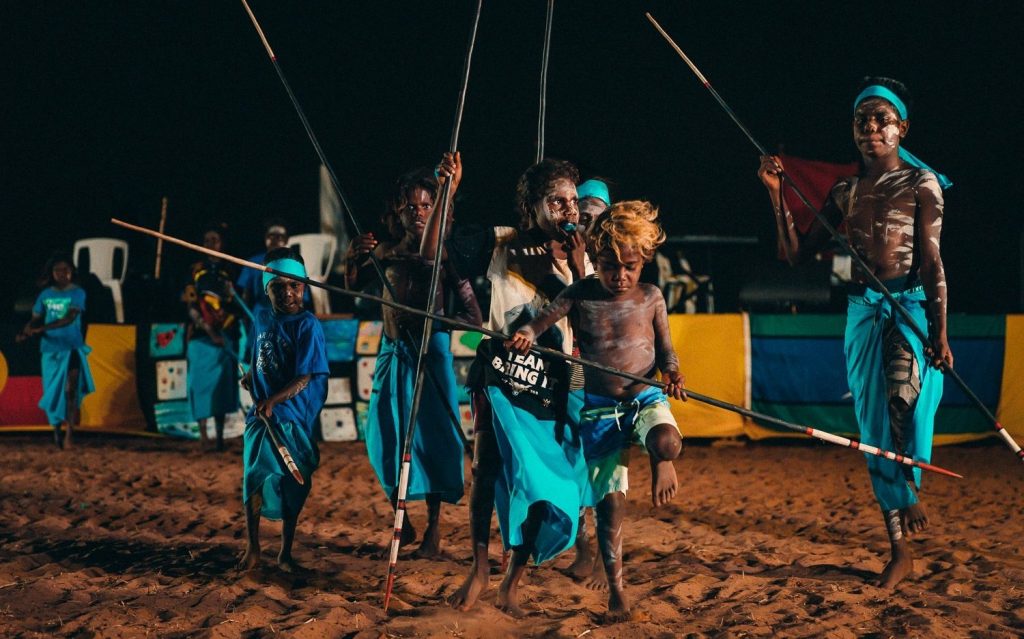 ‘Sometimes when the kids go camping with their parents or go hunting, they just go and dance,’ said Artistic Director Grant Nundhirribala, who spoke with ArtsHub just as the 2021 Numburindi Festival wrapped up after three energetic nights of song, dance and community gatherings.

Nundhirribala continued: ‘One of my grandson, when we go hunting or camping, he said “Granddad, can you sing for me” and I sing every night in front of the fire – he’s dancing, the young fella. And I said one day he would be dancing with big mob crowd … All the kids do that.’

The Numburindi Festival was established in 2016 by Artback NT as the first of its kind in the region – a direct response to clan groups living in Numbulwar who wished to celebrate the diversity of Indigenous culture.

This year the festival returned from 23 – 25 September, after facing cancellations last year.

Born out of Artback NT’s Indigenous Traditional Dance program, intergenerational teaching sits at the centre of the initiative to empower Aboriginal youths through culture. Various workshops and classes culminate in the Festival’s opening of a traditional Wungubul performance each year. The best young dancer from each clan was awarded at the closing ceremony.

Culture is really important for kids. Their culture is important for them, for their future. Dancing everything, in their own Country, so they know their story, where their Country is, their song line.

‘On Thursday (the opening night) all the kids from the clan groups were dancing, and it was very good, and all the kids were enjoying [themselves]. All the communities liked it and enjoyed it,’ said Nundhirribala.

The 2021 Festival featured performances from Numbulwar clan groups Ngalmi, Nundhirribala, Murrungun, Nunggarragalu and Mangurra, along with broader family networks living in the Roper Gulf Region (NT). There were also performances by visiting musicians and dancers, this year making the journey from Groote Eylandt and Gapuwiyak.

For the Elders, it is about joy and celebration, Nundhirribala said with pride: ‘We show the Elders what a festival is … All my Aunties got up and danced.’

Home to diverse Aboriginal communities, Numbulwar sits on the western coast of the Gulf of Carpentaria with 12 languages and clans among a population just over 600. With the region’s median age at 23 years old, the Numburindi Festival is an exemplar of Aboriginal self-determination, and fosters the understanding of culture for the next generation.

For Nundhirribala, teaching comes with participation and kids were especially encouraged to show off their talents in the Festival. ‘We are gonna keep them young generation strong,’ he said.

Apart from the annual festival, and with the support of Artback NT, Nundhirribala has hosted a series of youth bush camps throughout 2018 – 2020, engaging Clan Elders to teach young people about Country through song and dance.

Nundhirribala expressed high hopes for the Festival’s future: ‘Next year I’m going to try bring regional dance mobs [to the festival], we want that. And have more people from around the state. This year some other communities were upset that they didn’t make it.’

The Numburindi Festival is a closed community event, running across three days every year in September. For more information visit Artback NT.