Celebrating the philanthropists who keep the arts in Australia alive

The recipients of the 2020 Creative Partnerships Awards were announced in Melbourne this week.
Richard Watts 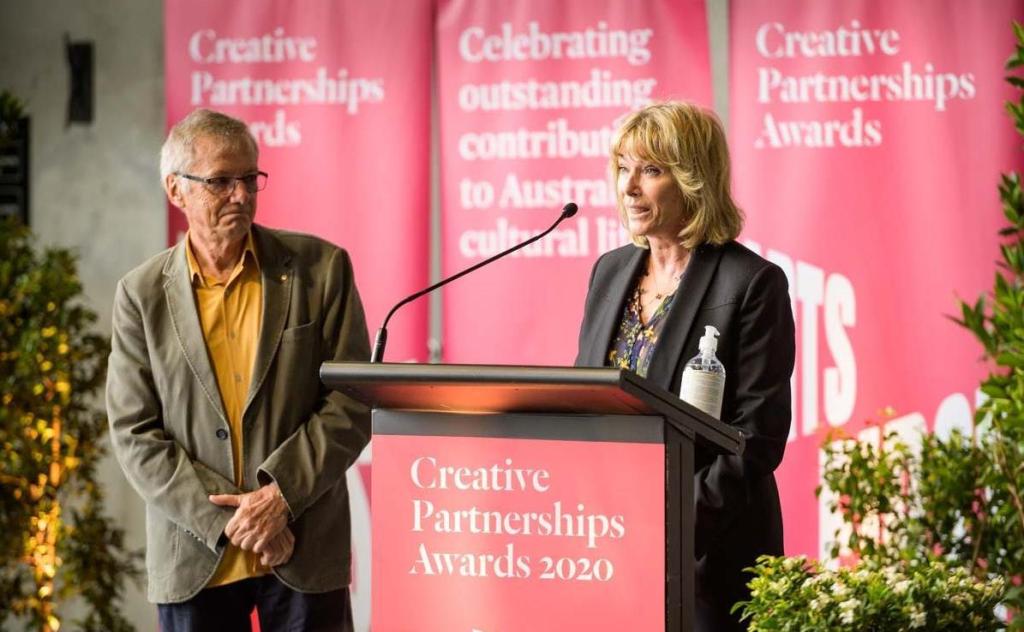 The precarious reality of Australia’s arts ecology is a key driver of private giving, according to philanthropist Maureen Wheeler AO.

‘If you get involved with the arts on any level, you soon realise just how tenuous the whole enterprise might be. It’s maybe from one performance to the next, or it might be one season to the next or one grant to the next. But none of it is something that you can be absolutely certain will continue to be available, if there aren’t people prepared to put money into it,’ said Wheeler.

Together with her husband Tony Wheeler AO, the Wheelers have played a pivotal role in arts philanthropy in Melbourne over many years, spearheading the creation of the Wheeler Centre as well as supporting Opera Australia to bring The Ring Cycle to Melbourne.

Other recipients included WA’s Alexandra Burt, patron of private giving at the West Australian Ballet and winner of the Emerging Philanthropist Award; S. Baillieu Myer AC and Sarah Myer, who together with Lady Primrose Potter AC were jointly presented with the Arts Visionary Award; and Telstra’s Andy Penn, the recipient of the Business Leadership Award.

The Arts Leadership Award was presented to Rachel Healy and Neil Armfield AO, the Co-Artistic Directors of Adelaide Festival.

Healy said she was ‘chuffed,’ to receive the award. ‘It was completely unexpected, absolutely out of the blue,’ she told ArtsHub.

The importance of private giving in Australia was acknowledged by the Hon Paul Fletcher MP, Minister for Communications, Cyber Safety and the Arts, who said: ‘The Creative Partnerships Australia Awards are an important opportunity to recognise the generosity, advocacy and leadership of philanthropists who champion arts in Australia … On behalf of the Morrison Government, I would like to extend my gratitude and congratulations to all the Award recipients.’

Creative Partnerships Australia’s CEO, Fiona Menzies, said that the Awards recognise recipients who help develop the arts for everyone.

‘Every year it is humbling to see how many passionate supporters of the arts there are, and this year is no exception,’ said Menzies.

‘This year’s Award recipients all have a deep understanding of how arts and culture are an integral part of people’s lives and their contributions are both about supporting excellence and ensuring that all Australians can access and enjoy the arts. In each case, they are not only generous supporters themselves, but are champions for the arts and encourage others to join them,’ she added.

HOW THE AWARDS EMPHASISE THE IMPORTANCE OF GIVING

For Healy, the Creative Partnerships Awards play a key role in encouraging additional philanthropy through their recognition of the importance of private giving – giving that can start with a modest donation with the potential to grow over time.

‘I don’t think there is as great an awareness, perhaps, of the breadth of giving in this country. And it can be a tiny gift that is frequently given every year that may – and in many, many cases has – led to a bequest at the end of life,’ said Healy.

The importance of small, regular donations cannot be understated, she continued. ‘It’s a validation of what that company and those artists are creating. And I think that there is a sort of, “we believe in you” aspect to giving that is as important when you receive a $20 donation as it is when you receive something much larger.

‘Someone is saying, “I hear what you’re trying to do, and it resonates with me, and I want to help.” It has an incredible power to it that’s very affirming and very moving,’ Healy said.

The value of regular giving was also stressed by Maureen Wheeler, who noted: ‘It’s the continued giving, the continuity of it, even more than the amount of it that really makes a difference … Supporting something that you love is important, but it’s also important that it’s continuous.’

According to Wheeler, philanthropy is ‘driven by passion, definitely,’ but she said the head plays just as great a role as the heart in determining where to give and which companies to support.

‘An organisation I like very much is Red Stitch; I think they do great work. And when I first started going to them, I wanted to help them to keep doing what they do. But I think your head comes in when, at some point you think, “is this going to last? On my own, I can’t keep this thing going, so are there enough people who also love it?” And so your heart takes you there, but then your head sort of says, “Well, after a couple of years, if it’s not working, what when?”

‘But with something like Red Stitch that’s gone on and on, consistently turning out great work, then you think “Yeah, this is definitely something that I’m happy to be involved with on a greater level,”’ Wheeler said.

The long-term support of philanthropic donors can extend well beyond their financial support of your artistic vision, Healy noted.

‘Really good relationships are so much more than that. Because your donors are not just passionate about what you do: they become your ambassadors, they give you feedback, they often offer their own networks. It’s this really rewarding relationship that in some cases has gone over decades,’ she said.

In the Wheelers’ case, their philanthropy began long ago, during the many years they ran the travel publishing house, Lonely Planet.

‘We have been involved in philanthropy for a long, long time, through the Lonely Planet Foundation, which was set up for projects in developing countries – and that was about clean water or hospitals for children. And the reason you do things like that, I think, is because you see that real need and you’re able to do something about it,’ Maureen Wheeler explained.

‘The arts for me is a little bit different,’ she continued, referencing recent comments made by fellow Creative Partnerships Award recipient Lady Potter (who said ‘If you don’t support what you like you won’t have it… that’s always been my mantra.’)

‘I think Lady Potter put it very well. If you care about something, then you look after it, you put money into it, you do whatever it takes to keep it going. Because if you don’t, it may not be there [in the future],’ Wheeler said.

‘I think that by keeping things going, trying to make sure that the opera and theatre and dance – whatever it is that you’re passionate about – if you can help to support it, then you’re helping to perpetuate it, and along the way, perhaps you’re convincing other people of how much the arts contribute to our lives,’ she concluded.

Learn more about the recipients of the 2020 Creative Partnerships Awards.