Celebrate the physicality of engaging with art in giant proportions

The 2020 NGV Triennial weaves its way into our memories as viewers – a kind of date stamp on this year as we re-emerge and rethink our engagement with the world.
Gina Fairley 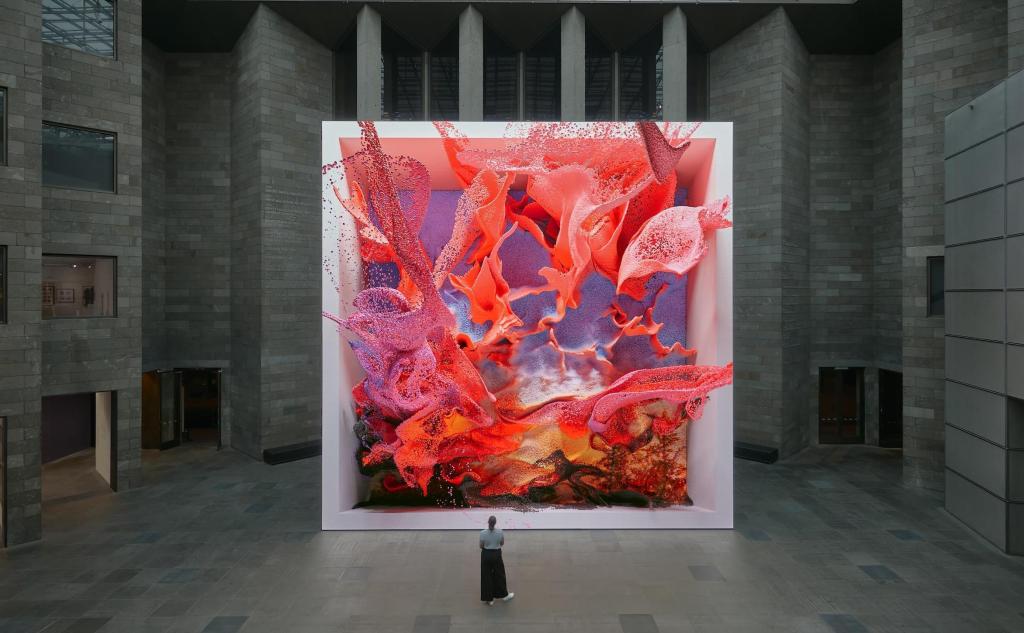 When the inaugural NGV Triennial was staged at the National Gallery of Victoria in 2017, the overwhelming comment was about its scale. Not often do we use the word awe in contemporary vernacular, but it is apt when confronting an artwork that seemingly embraces the viewer and engaging the senses.

For this next edition – curated over the past two years and spanning a trying lockdown period – ambition has not dwindled.

It is the kind of experience that says at high volume: ‘You are back in the gallery.’

Dr Simon Maidment, Senior Curator of Contemporary Art, NGV, said: ‘Emerging out of isolation, out of our homes and routines and into an immersive and bodily experience of a show of this scale and undertaking, we believe will draw the audience fulsomely into the worlds and concerns of the artists and designers featured in the 2020 NGV Triennial, and provide the opportunity to stop and listen to their stories.’

As with many major exhibitions, there are works of scale in the NGV Triennial that might trigger emotions, feel immersive, or play with our sense of intrigue.

Maidment continued: ‘It’s true that there are works of grand and architectural scale in this NGV Triennial exhibition, such as the 10m high and wide moving image work by Turkish artist Refik Anadol made using Quantum computing – which is intended to dwarf the viewer and call into question human domination over nature.’

There are also works that play off our intimate engagement with them, such as the wooden carved figures by Japanese artist Tomoaki Suzuki, which are roughly one third the scale of their subject.

‘The exhibition is arranged in such a way to constantly call into question the scale of our bodies to the world, and where we stop and the rest of the world begins,’ Maidment told ArtsHub.

Perhaps this permeable engagement with the physical world is best explored in a newly commissioned work by Kengo Kuma, one of the most respected figures in Japanese architecture, in collaboration with Melbourne artist Geoffrey Nees.

Together they have created an architectural pavilion that acts as a sensorial walkway through which to approach and contemplate a newly acquired painting by South Korean artist Lee Ufan.

The work will be constructed from timber harvested from trees that died during the Millennium Drought at Melbourne’s Royal Botanic Gardens, some of which pre-date European colonisation.

Nees told Artshub that he hopes ‘people will feel something first and then think about it later, and not the other way around.’

He explained: ‘Circles and cycles are central to both the form and content of this work and these big but simple ideas might act as an emotional trigger.’

During COVID, many of us hankered for that emotional trigger of art ‘viewed in the flesh’.

‘Polish-German artist Alicja Kwade’s installation is perhaps the most obvious example of this, but arguably the idea extends through the works of indigenous artists Hannah Brontë, Steven Rhall and Glenda Nicholls as well as others,’ said Maidment.

Kwade’s installation plays wonderfully with illusion, but also has a certain formalism to it.

The artist told ArtsHub: ‘I am interested in the observation and the process of experience. I try to be fully aware of what our senses can and cannot perceive, and how that happens; also in order to use it for my art, to trick our senses, and to use this for my intention.’

She described museum shows as needing a level of dramaturgy. ‘I almost always see them like a play that is activated by the audience,’ Kwade explained.

In Kwade’s large-scale installation WeltenLinie (2020) nothing is quite what it seems.

‘As viewers move around and through Kwade’s steel-framed hexagonal structure, the way one reads and understands the objects within it shifts dramatically, depending on perspective. WeltenLinie is more of an experience than a static installation, which comes to life through the viewer’s movement within the structure,’ said the gallery.

Kwade continued: ‘Only when the viewer moves in and through the installation, the whole work unfolds … This transformation is generated by the mirrors, but also through the illusion that there are actually no mirrors. This effect is necessary to “question” the truthfulness of things and objects.’

In this way, her artwork is really completed by the action of the viewer moving through it.

Harnessing a dataset drawn from over two hundred million images linked to nature from publicly available internet resources, and processed using quantum computing with machine learning algorithms, Anadol’s work speculates about an alternate dimension of the natural world as a complex cultural entity.

Anadol explained his work for ArtsHub: ‘The artwork is 10 meters by 10 meters, one of the largest media walls in the world. The NGV’s architectural space is holding this piece in a way that the audience will never be able to escape from the impact, the sublime effect of it,’ he laughed.

‘This will give the audience a strong sense of space, and especially, in my work, I have been following trompe l’oeil, the effect of light and shadow, of forms that give depth to the experience.

‘The idea behind the piece is to speculate about an alternative reality that may only exist in the mind of a machine … [and] the music you hear will also be coming from the same data and therefore is also an abstracted reality. The hope here is to create a mesmerising, emotionally impactful, strong piece, to experience something that has never been seen before,’ said Anadol.

While Anadol was speaking of his own work, he could well have been speaking broadly of 2020 NGV Triennial. This exhibition is undoubtedly impactful and mesmerising, and its DNA as an exhibition weaves its way into our memories as viewers – a kind of date stamp on this year as we re-emerge and re-think our engagement with the world.

Artworks are drawn from across Africa, Europe, the Americas, Australia, the Pacific and Asia.