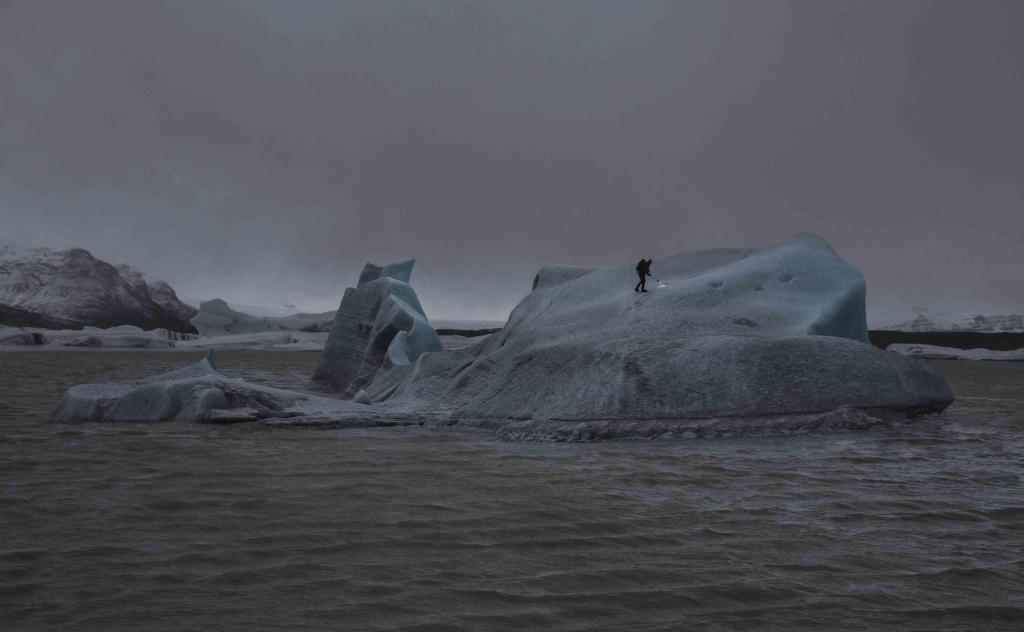 When I think of water, the words of Samuel T Coleridge’s seminal poem, The Rime of the Ancient Mariner, always come to mind:

Water, water, every where,

And all the boards did shrink;

Water, water, every where,

Nor any drop to drink.

It seems apt for our current water crisis. However, Queensland Art Gallery/Gallery of Modern Art (QAGOMA) Director Chris Saines makes the point that when the gallery started working on its new major exhibition Water two years ago, which opened in Brisbane this past weekend, they had no idea that two-thirds of Queensland would be in drought, that our nation would be ablaze with devastating fires, and that the UN Climate Change summit COP25 in Madrid (which opened the same week) decreed that, ‘We must finally demonstrate that we are serious in our commitment to stop the war against nature.’

Water is our most precious resource, nationally and globally. It is what unifies us, and divides us. Indeed, as humans our very bodies are comprised of about 70 per cent water – so it is a topic that naturally is palpable.

Curator Geraldine Kirrihi Barlow, Manager of International Art, said: ‘For a time, the global scale of the issue made it difficult to imagine vividly, but we are now aware of unprecedented droughts, floods, fires and cycles.’

Julian Charrière’s huge photograph blasting a glacier with a blowtorch in the gallery foyer The Blue Fossil Entropic Stories I (2013) (pictured top), or Angela Tiatia’s video Holding on (2015), which demonstrates the impact of rising water as it laps across the artist’s body, make these concerns real in everyday terms.

A big topic such as water needs a big splash (terrible pun), so QAGOMA has dusted off Cai Guo-Qiang’s iconic installation, Heritage, with its 45 animals drinking in harmony around a waterhole – commissioned and collected by the gallery in 2013.

While the smaller scale perhaps does not have the same impact as the original version with 99 lifesized animals, for first timers to this installation it’s still a jaw-dropper.

The gallery has additionally brought one of the most talked about installations internationally to Brisbane for Water: Danish/Icelandic artist Olafur Eliasson’s Riverbed (2014) – last shown at the Louisiana Museum of Modern Art in Denmark – and comprising 110 tonnes of stones and running water.

What is fabulous about this room-sized installation is that as visitors make their way across its raked terrain, they physically live its precarity – unstable underfoot – and the aural experience of crushing pebbles offset by a gurgling stream kind of messes with your head. The lighting designed to remove all shadows make it all the more surreal.

Barlow described: ‘Riverbed is disconcertingly out of place, it looks natural but suggests a catastrophic landslide may have just occurred. Without vegetation, it’s an undulating field of stones that seems both primordial and post-apocalyptic.’

It’s energising; it’s thought-provoking; and it reinstates the power of nature over man. Eliasson was in Brisbane for the event, and ArtsHub will publish our conversation with him in the new year.

And if that is not an OH&S nightmare enough, Barlow has placed William Forsythe’s kinetic installation The Fact of Matter (2009) central to this exhibition – a kind of environmentally toned ‘jungle gym’, which also invites ponder and play.

Water is then laced with some of the most exciting artists working in our region – Angela Tiatia, Megan Cope, Ruby Djikarra Alderton, and the Mata Aho Collective (NZ), among others. Even though there are big names at play, the hierarchy across this exhibition is diffused.

While the spectacular is directed towards riverbeds, climbing rings and stuffed animals to set the tone for the conversation, it is a quieter work by Cope – a midden – that viewers first engage.

RE FORMATION (2019) takes the environmental and cultural significance of the oyster shell as its subject, then casts them in concrete and positions them on a black sand-like copper slag. Given these middens were found on the banks of the Brisbane River for thousands of years, and have been eradicated in just over 200, this gentle piece packs a wallop.

It is book-ended across the exhibition by Peter Fischli and David Weiss’s smiling Snowman (1987/2017–19), which is encased in a freezer-like vitrine and sits overlooking the Brisbane River – the site of catastrophic floods in 2010-11, and indeed home of those middens, offering an interesting correlation.

Snowman has been engineered so that it will never melt, defying the natural conditions, and yet he require daily maintenance – a reminder that sustained environmental harmony doesn’t come without work.

Like the day when we will no longer have chocolate and natural coffee due to the world’s depleting forests, Snowman will remain like a museum relic encased for preservation,  and looked on with wonder: ‘So that is snow – that is what our world was.’

The messages are strong here. They are also manipulated at the hands of Barlow.

Forsythe’s installation, for example, was not envisioned with reference to climate change, but the artist responded favourably to it being used in the context of rising sea levels, when invited by Barlow.

Audiences hoist themselves up, and make their way across the installation as if wading through waters, stepping from one ring to another. It is physically challenging.

The gallery describes: ‘Our capacity for “transformational adaption”, our swiftness, dexterity and ingenuity in moving together, will be key in determining the severity of the outcome.’

The rise of sea-levels has accelerated to five millimetres per year, with a forecast of 40–80 centimetres by the year 2100, depending upon how we act. Audience can embody that very challenge – to use ‘the body as a thinking tool’, says Forsythe.

Curiously the gallery has included David Medalla’s Cloud Canyons No.25 (1963-2015), another work re-purposed for the climate conversation. The gallery has drawn on the sculpture’s reaction to intangible forces of temperature, gravity, atmospheric pressure and humidity.

It sits within sight of Tiatia’s works from Tuvalu, and the Mata Aho Collective’s woven tarpaulin Kiko Moana (2017), speaking of the loss of cultural ground with rising waters – both works lending depth to the ideas explored.

One of the most impressive works in this exhibition is that rippling blanket of ubiquitous blue tarpaulins – 60 of them folded and sewn in a design reminiscent of tukutuku panels in Māori meeting houses.

Kiko Moana (2017) rises like a majestic sea in a darkened gallery (pictured above).

Kiko Moana is a new kind of weaving, honouring not only contemporary Māori culture, through the familiar material of the tarpaulin, but also the traditional figure of the taniwha, a powerful water spirit that lives in rivers, lakes or the sea.

It is placed within a moody room with work by Judy Watson, a suite of daguerreotypes by Joyce Campbell, and Trevor Paglen’s suite of murky photographs, Undersea cable – theoretically, the tapped internet cables of the US National Security Agency (murky indeed).

As Paglen notes, ‘more than 99% of the world’s data travels through fibreoptic cables draped across the ocean floor.’

Also turning to underwater and intertidal life – but the biological version – is artist Vera Möller with a foyer work, Vestibulia (2019), and a phosphorescent ceramic installation, Cajalia (2019).

Trained as a biologist and in freshwater ecology, she describes her work as a kind of fiction – evocative of a coral reef on one hand, but then also evoking our dying reefs through rising sea temperatures. Cajalia moves between a blue scape to an arid dusty coloured one.

Other sure highlights across this exhibition are Paul Blackmore’s Heat 1–4 2018, a series of photographs of the extended moment between diving under a wave and moving towards the ocean’s surface; Martina Armati’s film Under (Depth) 2015 capturing her experience of freediving, and Tacita Dean’s Disappearance at Sea (1996) the revolving lantern of a lighthouse looped by a 16mm projector.

This is not an overly big exhibition – despite including big names and being technically impressive – but it offers incredible engagement that seeds thought. Through familiarity, play and beauty Water addresses some of the major environmental and social challenges that we face today, from weather cycles, to climate change and the food chain.

There is a push and pull across this exhibition, as viewers bounce between scale and intimacy.

This is perhaps best demonstrated by Forsythe’s busy installation juxtaposed with the intimate works of Patrick Pound; or Joyce Campbell’s daguerreotypes in quiet conversation with the grand gesture of Mata Aho Collective’s Kiko Moana. But, in that, there is little tension. It works at the hand of Barlow.

I am not sure where the starting point for this exhibition was. Perhaps it was about activating the collection investment in Cai’s Heritage, or maybe it was the public success of Riverbed in London and desire to get Eliasson to Brisbane?

Regardless, WATER clusters artists like barnacles around a concept, one where artworks are reframed and rethought. It is a great example of how an exhibition can extend how we think through unlikely pairings.

This will be one of those exhibitions that will be remembered for its pulse in sync with a moment; with a collective zeitgeist of concern. In truth, as a society we are moving towards a spectre of guilt and trauma. Water offers a way to process that on more comfortable terms.

The writer travelled to Brisbane as a guest of QAGOMA.