A circus of considered beauty, stillness and zen-like meditation.
Katie Lavers
[This is archived content and may not display in the originally intended format.] 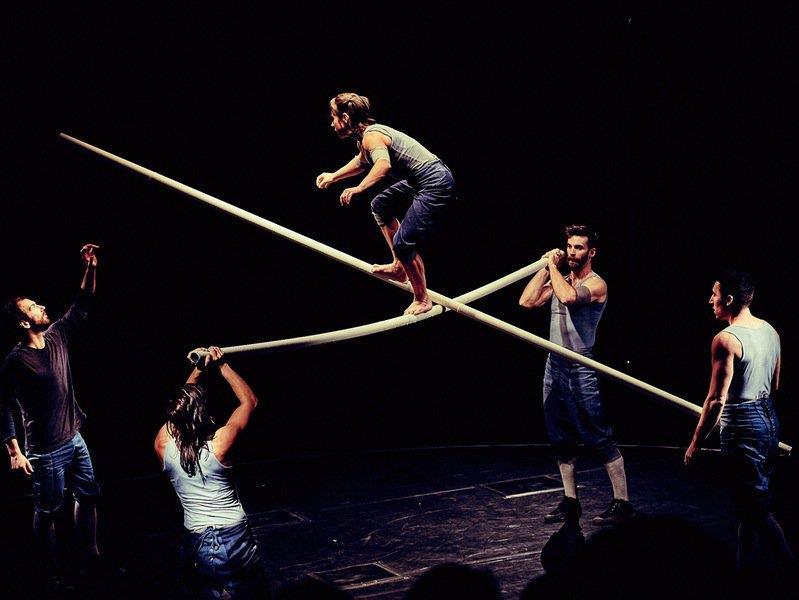 UK circus company Ockham’s Razor has come to prominence and international attention for their works created through a process of designing and building new pieces of circus equipment. These new apparatus are then explored in the studio to develop new physical language and innovative performance.

Tipping Point, however, is a work that has evolved from innovative approaches to the use of a single traditional circus apparatus – the Chinese Pole.

Chinese Pole is traditionally rigged vertically and stabilized to support an acrobat performing a range of tricks. However in this work, the poles are untethered and become objects which are manipulated throughout the space by the five performers. They are used horizontally, set at diagonals in the space, tethered at the top, or at one point placed on an aerial trapeze to create a fulcrum and a new form of seesaw.

This ability to move the poles through the space creates a raft of new potential which is explored and investigated by the performers to generate the movement vocabulary for this piece. Circus physicality and aerial techniques are drawn on to enable the performers to interact creatively with the poles in three dimensional space and  at height.

At the start of Tipping Point one of the poles, which has been filled with a white powder – a mixture of chalk and salt – is rotated by the performers through the space to mark out a circle on the floor. This white circle becomes a ring which defines the performance space. Within this ring the poles become sculptural objects manipulated by the performers to generate a visual language of startling simplicity, one both considered and exacting. Little by little the movement language accretes, slowly at first, until audience expectations for overt spectacle gradually drop away, to reveal a meditative performance of breath, simplicity, and stillness. Tipping Point is a true blend of circus and visual art with the considered materiality and awareness of the body of the performer in space that informs installation and live art.

At the end of the work one of the poles, which is tethered at the top and filled with the white powder of chalk and salt, is set rotating through the space, drawing out ever decreasing forms of circles and ellipses, until, watched by all five performers who remain on stage throughout, it gradually comes to a gentle halt as it finds the still point in the centre of the space. This move to contemplative stillness marks the investigatory trajectory of the work.

Tipping Point reveals a new form of circus, one that is meditative, beautiful, and considered.