This often nonsensical pastiche of a show features great production and an eight-person cast work hard for their money – very hard – with an especially fine lead performance from Matthew Backer.
Dennis Clements 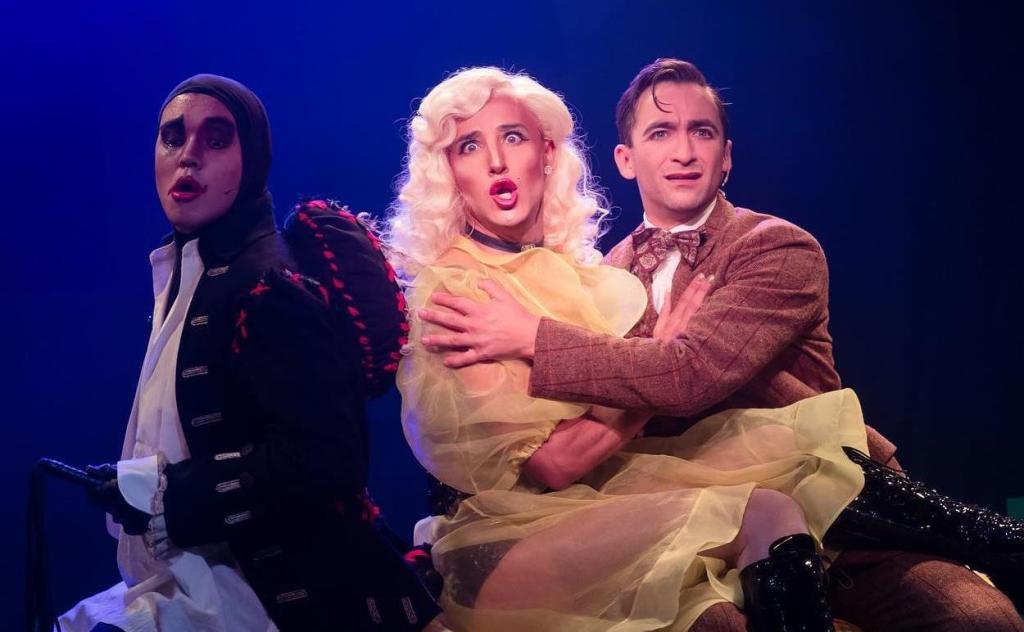 It is lovely to return to the intimate and exciting space of the Hayes after a tough year away! Mel Brooks’ Young Frankenstein is Hayes Theatre Company’s debut production for 2021 and you can tell everyone is very keen to return, given it’s heavily booked already. But there’s also been a great deal of anticipation, as the production is in the secure hands of director Alexander Berlage and his team, who previously gave us such impeccable productions of Cry Baby and American Psycho at the same venue – in what now feels like a very distant pre-COVID past.

‘The show looks fantastic, featuring great production design all round and set amid what looks like a cross between an MC Escher drawing and the Grinch’s castle.’

Young Frankenstein is a Mel Brooks creation, so if you’re going for a plotline you may be sadly disappointed, but for those of you needing context, Frederick Frankenstein, respected surgeon and grandson of the infamous scientist Victor, travels reluctantly to Transylvania where he has inherited his family’s estate. Before long, he finds himself back in the mad scientist shoes of his ancestor, and with the help of hunchbacked sidekick Igor and yodelling lab assistant Inga, he brings to life a new creature to rival that of his grandfather. But this time when the monster escapes, things take a somewhat different turn.

The show looks fantastic, featuring great production design all round and set amid what looks like a cross between an MC Escher drawing and the Grinch’s castle. Berlage has a great deal of fun with this often nonsensical pastiche of a show, layering in a lot of ‘in’ theatre jokes and making frequent reference to his pared-back cast, which went over well on opening night, but may wear thinner as the audience becomes more mainstream. Given that technique is stock in trade for Brooks, die-hard fans will appreciate Berlage staying true to the Brooks genre, while also loving the frequent local references. The Laugh In style design tricks that worked so well for Cry Baby re-appear again here.

The eight-person cast work hard for their money – very hard. But these delightful, scaled down versions of bigger shows have become a signature of the Hayes and it is a tribute to the immense imaginations of the creative teams and also the skill of the performers that they are able to carry it off so successfully. To say the production features gender-fluid casting is to radically undersell the concept, and it is absolutely delightful to watch some quite breathtaking transformations, particularly that of Ben Gerrard.

The evening is without question a triumph for Matthew Backer in the lead role of Frederick Frankenstein. He is engaging, charming, funny, has a strong clear voice, and can dance up a storm when required. But he is certainly given a run for his money as the almost vaudeville-styled series of numbers gives each of the remaining cast their moment to shine, and they certainly grab their share of the spotlight with feverish glee. Notable highlights include Shannon Dooley’s near insane Elizabeth and a great solo number from Olivia Charalambous.

‘The evening is without question a triumph for Matthew Backer in the lead role of Frederick Frankenstein. He is engaging, charming, funny, has a strong clear voice, and can dance up a storm when required.’

It’s not high art – and no one expects that from a Mel Brooks show – but it’s a lot of silly fun and a visual feast. Unlike Brooks’ other big musical hit The Producers, this script has little in the way of heartfelt truths peppered among the silliness, but after the year that was, a little silliness may be just what the doctor ordered.

You’re going to have to pull some serious strings to get a ticket as it appears sold out already. But if you manage to get one, make sure you wear a comfortable mask to the theatre that you can laugh through.