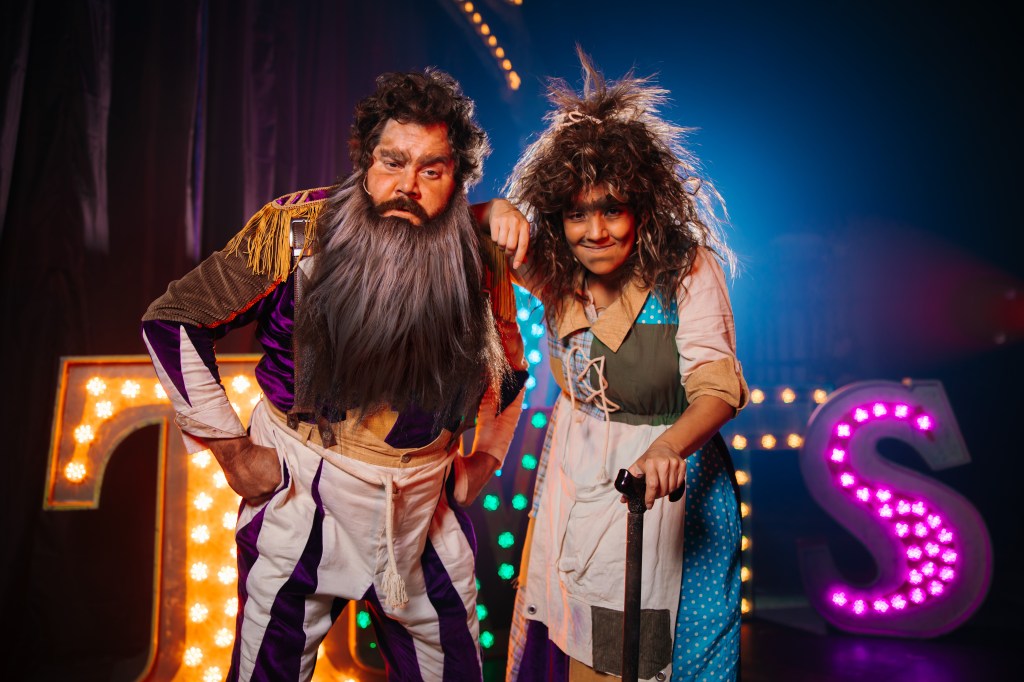 ‘The Twits remained true to Dahl’s timeless natural storytelling while staying relevant to its modern-day audience and being mindful of inclusivity.’ Photo supplied.

Roald Dahl’s much-loved novel The Twits was adapted for the stage by Shake & Stir Theatre Co, who are leading the way in contemporary Australian theatre with flair, style, and a whole lot of love. In true Dahl fashion, the cast delivered powerful messages: to treat others with kindness, that a person who has good thoughts can never truly be ugly, and most importantly, that beards are for twits! (Sorry hipsters of West End).

QPAC’s Cremorne Theatre is relatively small but Shake & Stir’s thespians brought a lively energy to every inch of the stage while the strobe lights illuminated the rest of the theatre. The show began with a revolving stage floor showcasing a wonderfully dazzling cast, and once it started spinning, there was no slowing down. The narrators ‘Maverick, the magician’, ‘Claudette the contortionist’ and ‘Rex the strongest strongman of them all’ made excellent use of the set, engaging with the audience through a pantomime of exaggerated movements, expressive facial expressions, and colourful costumes and props.

The children in the audience were shouting out in glee, easily matching the high energy of the performers. The Twits in comparison were dishevelled and disgusting, but the children loved them nevertheless.

Staying true to Dahl’s original storyline, tit-for-tat pranks between Mr and Mrs Twit made for some quality slapstick comedy with the transitions between scenes seamless and always entertaining. While the content of the performance had a rich narrative, it remained engaging throughout, and never felt rushed.

There were multiple layers of the show that cleverly appealed to showgoers of all ages. What drew the most laughs from the youngest members in the audience was a classic game of peek-a-boo led by the narrators of the show, the comical sound effects and perfectly timed spotlight making it one of the best games ever played. And for the adults, Mr Twit performed a satirical rendition of the classic stripper’s song Pony by Ginuwine, exuding more sex appeal than even Channing Tatum. But perhaps the true magic lay in the production’s intergenerational appeal in faux TV segments such as Cooking with Heather – where Mrs Twit made a version of gluten-free spaghetti that had everyone reeling back in horror and guilty delight.

As well as sympathising with the coeliacs in the audience, Shake & Stir’s adaptation of The Twits remained true to Dahl’s timeless natural storytelling while staying relevant to its modern-day audience and being mindful of inclusivity.

The narrators began the show by emphasising that everyone in the audience was welcome. The creatives at Shake & Stir contributed to positive representation of the LGBTQIA+ community by including a gender-neutral character, and a joke about the magician in a same sex couple having a hairy husband, without othering these characters in any way. In contrast, when I was growing up, most of the LGBTQIA+ representation I saw in the media revolved around the battles members of the community faced, such as coming out, discrimination, and violence.

For this fan of Dahl, it was a dream come true to see his characters come to life, years after reading his novels as a kid. This show brought me back to childhood nights illuminated by illicit torchlight, where I spent countless hours lost in Dahl’s world of Big Friendly Giants and Oompa Loompas. This production was a full-bodied visual and aural experience and should not be missed.

For people who might find such a high energy performance overstimulating, the cast are putting on a more relaxed production which is Auslan interpreted, and can be an audio described performance.

Meg Henry is a Brisbane-based student who likes to see as much live music as her university workload allows. As a third-culture-kid who grew up on the island of Borneo, she brings a unique lens to the arts, music, and performance scene. When she's not sprinting to make it in time for her 8am lecture, you'll find her at an Op shop, and hunting for 80s memorabilia.