Theatre Review: The Pulse, Gravity and Other Myths (Adelaide Festival)

Adelaide’s contemporary circus powerhouse return to the stage with a bold new work that is unlikely to have been made were it not for the constraints of COVID providing a rare opportunity to unite their three performance ensembles.
Richard Watts 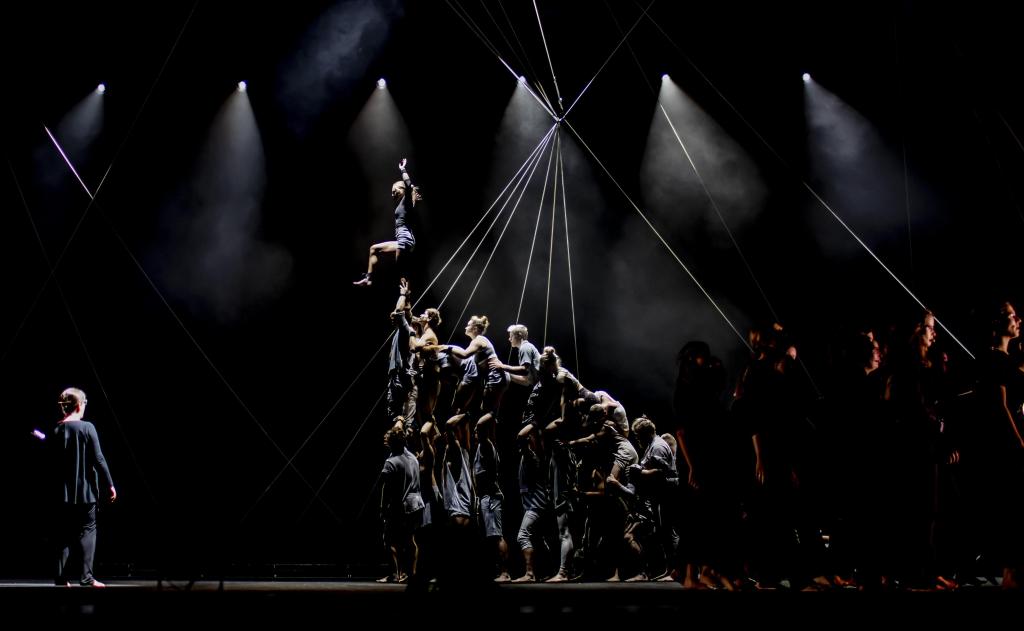 Gravity and Other Myths and Aurora, The Pulse. Photo credit: Darcy Grant.

Out of darkness, out of chaos, a moment of grace: a body emerges from the pack, straining up towards the light accompanied by a choir’s euphoric exaltations, before falling back into shadow.

The masses roil and reform, the light returns, faintly: an exquisite theatrical gloaming. In near silhouette, the tribe rallies and another body rises up out of the darkness, then another, and another, rising together as one; a complex structure raised up by community effort; a three-high built of flesh and bone and collective striving – and hope. Always hope.

Samuel Beckett never lived long enough to witness the artistry of Adelaide circus company Gravity and Other Myths (GOM) and their latest work The Pulse. Nonetheless, his famous aphorism, ‘Try again. Fail again. Fail better’ might almost have been written for the artform of contemporary circus as a whole.

Circus is an art that lives on the knife edge between triumph and tragedy. As audiences, we watch with our hearts in our throats as acrobats throw themselves into remarkable feats, always subtly aware that a mistimed throw, an off-kilter jump, could at any moment result in disaster. Building on such tensions, performers in The Pulse sometimes plummet in a breathtaking drop towards the stage, our collective anxiety dispelled when they’re caught by their comrades at the last minute. And when routines do – rarely – go genuinely awry, there’s comfort to be had in watching the acrobats regroup, reassure one another with pats on the back or quick smiles, and launch themselves back into space – this time triumphantly.

GOM’s The Pulse marks the company’s striking return to the stage after the tumult and adversity of 2020. When the combined impact of COVID and closed borders saw their expansive international touring schedule fall apart, Gravity and Other Myths were faced with an unusual predicament: some 30 ensemble members, who would normally be working on three separate shows simultaneously in different parts of the world, were stuck in Adelaide. How to keep them occupied, creative, and gainfully employed?

While JobKeeper provided an answer to the latter question, the company’s creative response to such challenges was to make their most ambitious work to date. The Pulse features a cast of 30 acrobats whose physical prowess is matched live on stage by the vocal dexterity of Aurora, the 25-strong senior vocal ensemble of the choir, Young Adelaide Voices.

With circus performers clad in white and off-white, and the choristers in black, a simple, striking duality is created on stage, with bodies herded, gathered and fluidly choreographed to create a sense of opposition and division, of coming together and communal exchange. Performers circle and pace, flow together and sweep apart, sometimes standing alone before being caught up again in the whole, all the while accompanied by the choir’s commentary and song.

The cohesive integration of live music, exquisite lighting and exceptional circus skills result in a series of memorable and dramatic sequences – a performer stepping off a high staircase of bodies into the unknown; an acrobat’s gibbon-like brachiation through a forest of bodies; a single artist first echoing then exaggerating the movements of choral director/conductor Christie Anderson. Moments of broad comedy (including a memorable rendition of ‘Mary Had a Little Lamb’) are contrasted with gasp-inducing sequences of physical prowess.

In the words of director Darcy Grant, The Pulse tells ‘a story of cause and effect. How we as people, communities or clusters of particles, respond to the subtle or significant changes that are continually happening around us.’

Such changes are embodied by dramatic lighting shifts (the appearance of an emerald aurora borealis on a white screen is especially striking), the minimal production design (the stage is often bare save for a series of ropes harnessed together to evoke points of connection and complexity) and direct interventions into the auditorium. The performers, acrobats and chorus alike, evoke the spirit of change through movement and sound – including moments of grace and poise, joyful scenes of controlled chaos (a sequence of pratfalls in which tricks deliberately and skilfully go subtly awry) and deliberate interventions that bring their peers tumbling down.

But as much as thing change, The Pulse seems to say, the human condition also means that predictability and familiarity remain certainties in life. Thus, those familiar with GOM’s work will notice certain signifiers recalling the company’s previous productions A Simple Space, Backbone and Out of Chaos… (e.g. handheld lights, direct address observing and commenting on the action, particular tricks and routines) while the show itself has a circular structure, with the opening and closing sequences reflecting and echoing one another, both physically and vocally.

Read: Why circus arts and festivals are a match made in heaven

Being a brand-new work there is room for improvement, with one sequence feeling distinctly untethered from the proceeding routine (an impression emphasised by the score being dominated by Ekrem Eli Phoenix’s composition at that point, until the choir’s contribution returns and helps ground the sequence again). Doubtless by the time The Pulse plays to audiences at Darwin Festival in August, such inconsistencies will have been smoothed out.

Aesthetically, this is a rich and refined work, vigorous, playful and full of life. What especially satisfies is the joy the performers exude at being back in front of an audience; their delight at being on stage again, and their camaraderie, is palpable.

The Adelaide audience responded in kind, perhaps even a little too vociferously at times, ignoring the choir’s ongoing contribution to the work in order to applaud the simplest of tricks (perhaps collectively demonstrating that our Pavlovian response to circus trick needs to be deprogrammed –   applause points will come if you wait), applauding and gasping as if they’d never seen contemporary circus before. Or perhaps, like me, they were simply overjoyed at being in a theatre again and watching exceptional live performance.

It’s good to have you back, Gravity and Other Myths.