An adaptation of Markus Zusak's novel has a mixed reception.
Kyle Walmsley 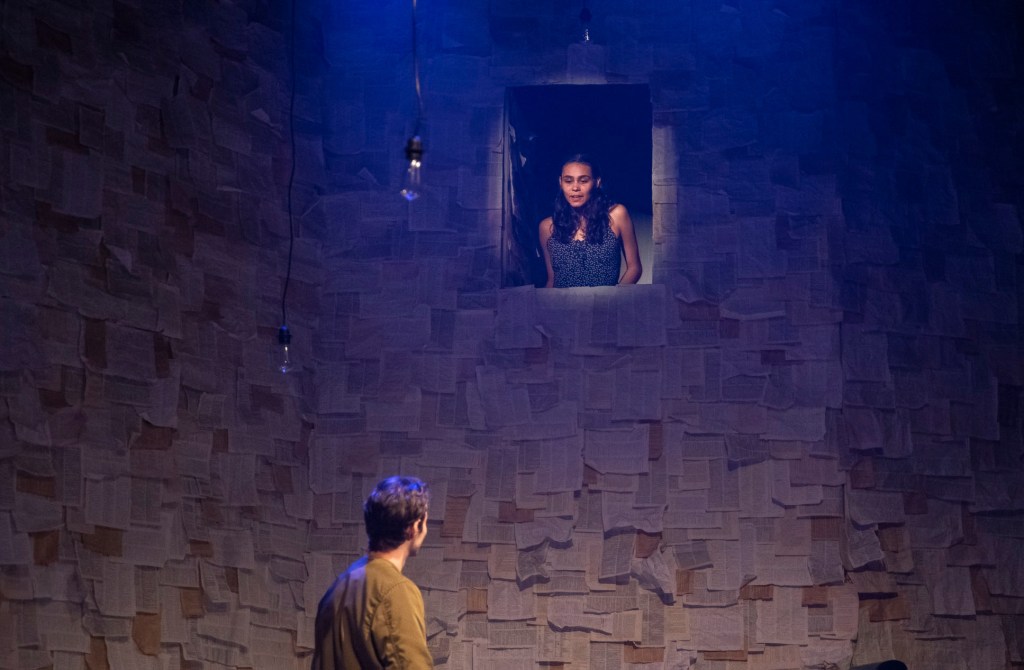 ‘This production feels like it could sit most comfortably as a companion piece to those who have read the book.’ Photo supplied.

Brown’s Mart’s first show of their 2022 season is Ross Mueller’s The Messenger directed by Merrilee Mills. Opening night happened to fall on International Women’s Day, and perhaps unfortunate timing given this production’s exploration of men as the heroes to their own destinies, and also women’s destinies. There were audible groans from the moments where our ‘hero’ tells a woman what to wear, who to see, and what to do.

Mills writes in her notes of the show’s aim to explore the ‘redemptive power of literature’ but before any characters get a chance to tussle with their individual destiny or redemption, The Messenger is ultimately undone by its clumsy wrestle with its own form on stage.

Ross Mueller’s play is an adaptation of Markus Zusak’s award-winning Young Adult novel of the same name. It’s beloved by many readers and long a staple for secondary teachers as a study of literary devices and unconventional storytelling.

The play mostly follows 19-year-old Ed, an underage taxi driver who has been sent on a quest to interfere in other people’s lives in order to help them fulfil their various destinies; to become people with purpose and hope. Ed himself longs for the attention of Audrey, who spends most of the play shooing him away. He also yearns for the respect of his mother, who spends most of the play also shooing him away. The catalyst for the shake up in Ed’s life – which is either an imagining in real life or a self-aware literary device – is Ed’s seemingly naive interference in a bank robbery.

Whereas the novel sits squarely with Ed and the tasks he must complete, Mueller has opened the story to give much more focus to the writerly aspect of the journey and plays with the meta-theatrics, including a set of librarians questioning whether it’s their turn to appear on stage yet and with scenes placed in a world where the walls are littered with scrunched and torn pages – perhaps multiple versions of the story that’s playing out before us.

This visually striking set design by Beck Adams, illuminated beautifully at times, destabilises our understanding from the start of what is the baseline reality. To be able to comfortably step in and out of the action, the audience must have a strong sense of the characters’ lives and imaginings. But the multi-narrative devices make this difficult. Some narrated action is performed, some voiceover provide backstory and unseen characters while other stylised techniques (like a moment of shadow play) bear little connection to anything we’ve seen or heard on stage.

The snippets of original music by Zachary Wilson provide a refreshing support to the production but there’s an inconsistency musically overall when this is combined with the recognisable royalty-free loops from Apple software that assist in dragging us from from scene to scene. This lights down, music up, actors move position scenic changes slow down the unconventional form of the script. The actors do the best they can, but the large cast is mostly underused.

However, Thomas Midena provides some delightful physical moments as the anthropomorphic dog, the Doorman, and the chorus of Jack MacMillan, Alisha O’Brien and Lexie Gregory punctuate the drama with comedic precision as an offbeat trio of librarians and police. It’s the energetic force of the actors, as well as the moments of delight in the visual imagery on stage that move the story along.

This production feels like it could sit most comfortably as a companion piece to those who have read the book, and are able to use it as a discussion point about the pros and cons of telling and retelling stories, and how different mouthpieces inform a story’s meaning. In that way, it is very successful in stirring up discussion and debate.

It’s a line oft-heard already this year nationally, but, this production has overcome its fair share of pandemic-related knocks and tumbles, and is worth noting that this is a remarkably slick production for a process that only saw the complete cast wholly together at the dress rehearsal for the first time.

This is a satisfactory side dish, best accompanied by the source novel as the main course.

The Messenger will be performed until 19 March 2022

Kyle Walmsley is a theatre maker and writer. Previously he has worked for Corrugated Iron Youth Arts, The Flying Fruit Fly Circus, HotHouse Theatre, Polyglot, and Canberra Youth Theatre. He is a theatre graduate of the University of Southern Queensland.