Melbourne Theatre Company opens it's first mainstage production in 12 months and the wait has been worth it.
Reuben Liversidge 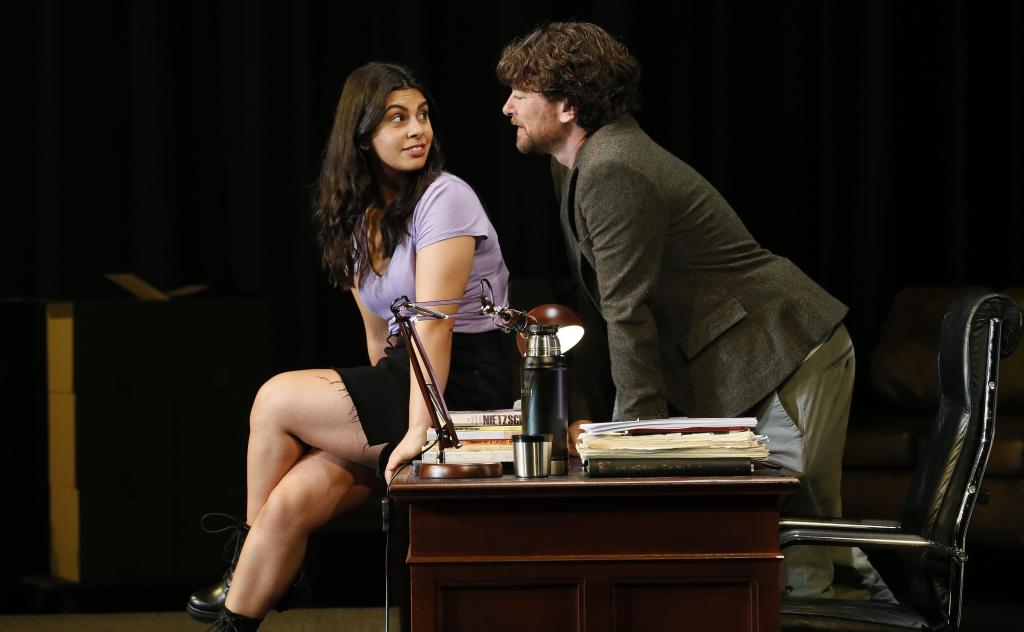 Melbourne theatre is back! After what feels like a lifetime Melbourne Theatre Company has finally opened their first mainstage production exactly one year to the day since the season of David Williamson’s Emerald City opened and was cut short due to…well, you know the rest. The play they have chosen for this conspicuous debut is Sexual Misconduct of the Middle Classes and it’s a doozy. The wait has been worth it.

Written by Canadian playwright Hannah Moscovitch this intimate two-hander takes the cliched narrative of a love affair between an older male professor and a younger female student and unpacks it through a post #MeToo filter. Jon’s (Dan Spielman) third marriage is falling apart and he’s trying to finish his latest novel when he embarks on a secret affair with a 19-year-old student Annie (Izabella Yena). Gender power dynamics, ingrained societal notions of sexuality and personal culpability are just some of the issues explored in this very wordy and powerfully prescient play.

‘Gender power dynamics, ingrained societal notions of sexuality and personal culpability are just some of the issues explored in this very wordy and powerfully prescient play.’

The majority of Sexual Misconduct is told from Jon’s point of view and the structure of the piece takes it cue from university lectures and essays; chapter titles are projected on a screen throughout and many of Jon’s speeches to the audience make you feel like you’re back at uni. Whilst there is a lot of dialogue it’s often what’s not said that packs a punch; sentences are often cut-off midway, thoughts are left dangling and long silences permeate.

Moscovitch wisely acknowledges the preconceived notions of this traditional relationship set-up early on and incorporates the fallout from the #MeToo movement directly into the story, propelling the narrative towards a concise and compelling conclusion. Without giving too much away, Annie gets to take control of her story and Jon is silenced. These thrilling final moments are spectacularly achieved through Petra Kalive’s nuanced direction.

Sexual Misconduct was originally slated to appear in MTC’s 2020 season and was set to play on the small stage of the Fairfax theatre. The set has now been redesigned to fill the larger space of the Sumner and unfortunately the aesthetics don’t quite gel with the intimate nature of the piece. The actors are dwarfed by large set pieces on either side of the stage, which seem to represent the university setting and Jon’s residence respectively. There are piles of boxes and chairs stacked on tables at the rear of the stage, but these aren’t really utilised throughout the performance. Perhaps there is a reference to the unfinished nature of the narrative buried somewhere in the set design, but it predominantly comes across as unnecessary. The lighting design begins quite subtle before becoming starker and more dramatic as the characters’ stakes get higher. The potency of the aforementioned conclusion is made all the more successful by the set and lighting design; it’s a memorable moment.

Spielman and Yena are both wonderful in their roles. The play treats both characters with equal sympathy and gravitas and the actors have created dynamic well-rounded performances. Spielman has a unique connection to the audience from the outset; he’s refreshingly in-the-moment and skilfully plays off the reactions from the viewers. His Jon remains somewhat empathetic even as the darker side of his motivations are exposed, not an easy feat for any actor. As soon as she enters the stage Yena is like a breath of fresh air. She nails Annie’s youthful energy and deftly handles the emerging agency of the character as she matures through the different time jumps in the story. Yena’s perfectly calibrated performance is integral to achieving the breathtaking power of the play’s denouement.

‘The play treats both characters with equal sympathy and gravitas and the actors have created dynamic well-rounded performances.’

It’s difficult to put into words the electricity and excitement that was palpable at the opening night performance of Sexual Misconduct of the Middle Classes. After many months of deprivation, the Melbourne crowd couldn’t wait to experience live theatre in our city again. This production is the perfect way to kick start a brighter 2021 and does everything we want good theatre to do; it entertains but asks some very serious questions and, finally, we can answer.