A new production underscores the enduring relevancy of this classic novel.
Vicki Renner 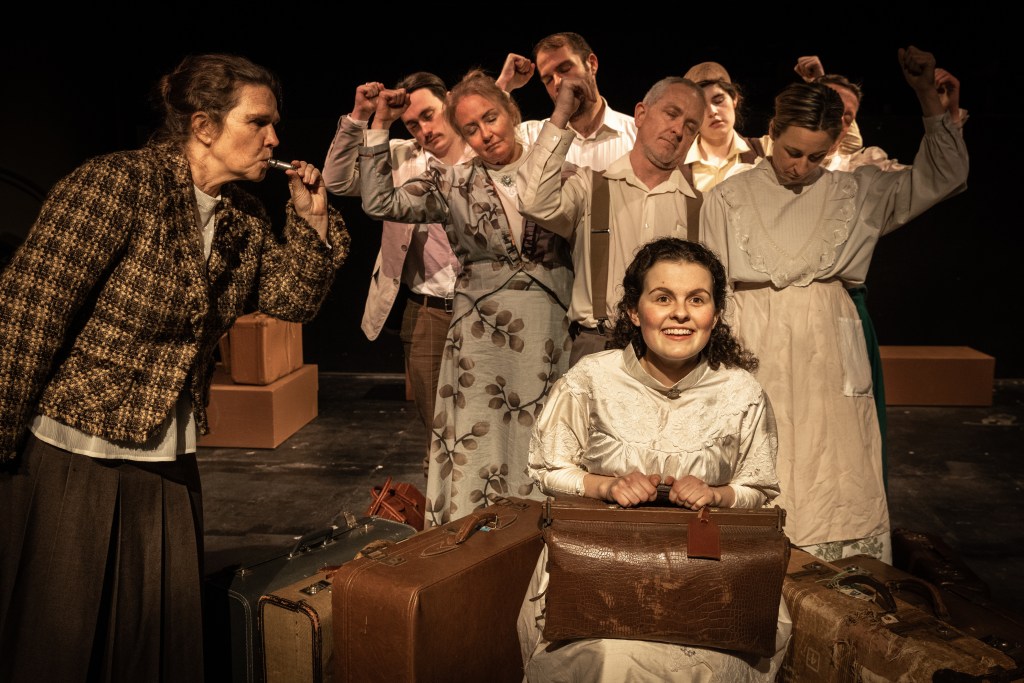 The ebullient cast of My Brilliant Career. Picture by Darren Gill

Stella (Miles) Franklin’s first novel, My Brilliant Career, was published 120 years ago in 1901. This iconic book that explores themes of women’s rights, the impact of poverty on women, and the stricture of gender roles proves that it’s just as relevant today as it was in the midst of women’s suffrage. It has been adapted many times, and now, the award-winning Skin of our Teeth Productions has delivered a fast-paced new version fit for a 21st Century audience.

This rendering of My Brilliant Career was written, directed and produced by Christine Davey and Skin of our Teeth Productions, and is faithful to the original but also charts its own course. With a standout performance by Molly England as Sybylla Melvyn, this reimagining is joyful, funny and invigorating, rising to a satisfying crescendo in the final scenes. England is an open-faced, honest and ultimately hopeful Sybylla. She relishes the exquisite language, and as she turns her face to the sun at the end, reiterating that she doesn’t want marriage but wants otherness, we really believe her. And we cheer her on.

In addition to Sybylla and the cast of characters, Davey brings us Stella Franklin herself, who acts as guide and confidante to the story and to Sybylla. Stella, played with heart and warmth by Madeleine Swain, is at times Sybylla’s co-conspirator, and at times narrates the story with her. She implores Sybylla on more than one occasion to ‘Run!’, and cries out in panic when Sybylla is at risk of getting stuck in hot, dusty rural backwaters of late 19th Century Australia. Author and character affect each other in a well-choreographed dance that never feels forced.

Stella also serves to move the story along, leapfrogging long scenes from the novel, acting as conductor to the motley chorus who give shape to scene changes, settings, and other characters. At times, this chorus (sometimes wayward children, sometimes murmuring old pastoralists) provides a cacophony of rural sounds, from cows mooing to dogs barking and clocks ticking.

We also meet important characters from this period in Miles Franklin’s life. Vida Goldstein makes an appearance, imploring us to get a move with women’s suffrage and reminding us there’s still, in 2021, more to do. We also meet Henry Lawson, who shepherded the original text through publication. There’s a cameo from Banjo Patterson and a clever reworking of “Clancy of the Overflow”. The language is lush and exquisite when giving voice to the Sybylla’s longings and when breathing shape into the 1890s Australian bush: the drudgery and heat, the eucalypts and sparkling rivers, the kookaburras and languid sunsets.

It’s incredible to hear the cast has only had three weeks of actual face-to-face rehearsal, thanks to COVID lockdowns. Once or twice, they tripped over each other’s lines, but there’s a messy vibrance to this production that strips away the illusion of reality, so these minor mistakes don’t detract. This is minimalist theatre, with scenes and characters suggested by suitcases, plastic flowers, crumpled letters and hats.

Each actor, apart from Swain and England, plays multiple characters, deftly swerving from thumb-sucking child to obnoxious mother to intense suitor. There’s the occasional patchy delivery but overall, the standard is high, and the exaggerated characters get some good laughs. The play is well-paced, with light, bright scenes that escalate to conflict, only to be resolved in quiet moments supported by intimate lighting. The interactions between key characters, especially Sybylla and Harold Beecham, is moving and at times beautiful.

My Brilliant Career is on the VCE syllabus and students are encouraged to watch this production to deepen their understanding, not just of the novel, but also of the period, the themes, the characters and the author. There’s much to love about this production. While the original text might have focused on how difficult it is to be a woman and reject marriage in 1890s Australia, Davey brings us a new version filled with hope.

My Brilliant Career will be performing until 8 August 2021 at La Mama Courthouse, Waurn Ponds Hall from 14 to 29 August, and other regional centres throughout September.

* In light of Melbourne’s week long snap lockdown announced today (5 August), all SPRING1883 satellite events will be paused while waiting for further advice from health directives.