An all-singing all-dancing troupe of Public Transport Inspectors enforce law and order on the fine citizens of Melbourne.
Sarah Liversidge 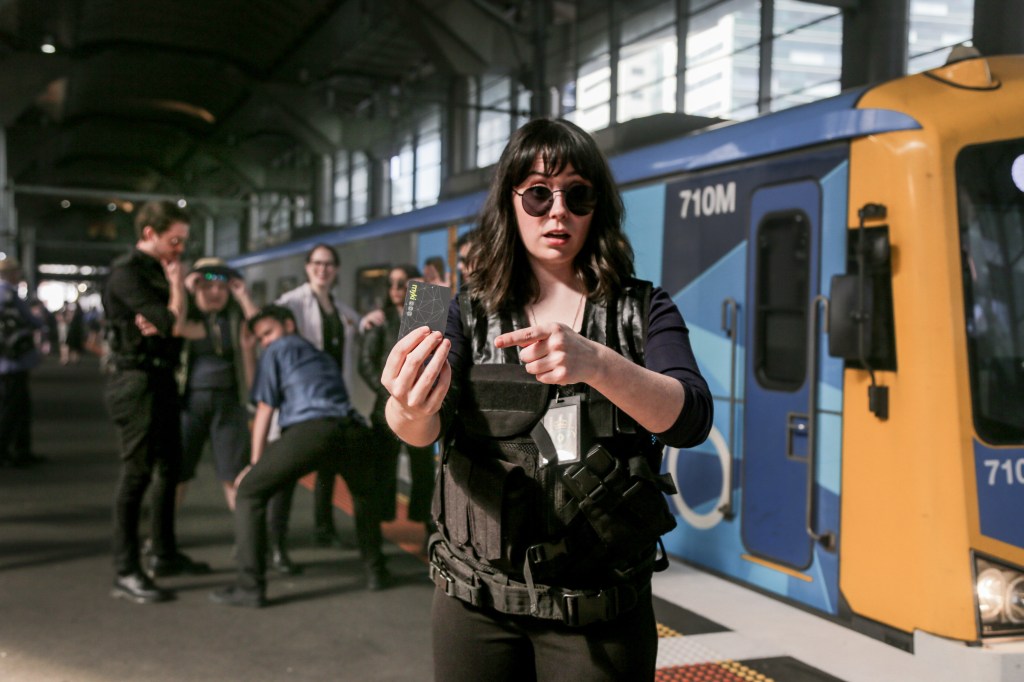 ‘This is without a doubt one of the most absurd and ridiculous pieces of ensemble comedy out there.’ Photo supplied.

Whatever anyone may make of Law and Order: PTV, there is no denying that these performers are having a hell of a good time. Sevenfold Theatre Company’s production is back for another run at The Toff in Town after a sell-out season in 2021. The company describe themselves as ‘an ensemble of artists, who aim to nurture an artistic network by seeking young artists, directors and writers to build a community that produces and elevates new works and adaptions.’ This philosophy is clearly on display in this show.

Loud, stupid and hilariously fun, Law and Order: PTV is an all-singing, all-dancing, comic spectacular celebrating the work lives (and loves) of Victoria’s feared public transport inspectors. The audience is involved even before the show begins, with officers patrolling the audience asking to see valid tickets. The opening scene is a high-energy disco dancing parody of a pop music clip that sets the tone for the next hour. The frame of the action is a spoof of the US detective show, Law & Order SVU. An ominous voiceover mimics the famous TV series but instead of detectives solving murders and kidnappings, the heinous crimes are public transport offenders, and the heroes are the brave Victorian Authorised Ticket Inspectors.

We are introduced to the characters who all bear the names of Victorian suburbs/train stops such as Upfield and Ferntree Gully. The stage is set up as typical detective show with white boards covered in clippings and photos of suspects. During the action our uniformed heroes pursue fare evaders, feet-on-seat villains and concession card criminals. The main character of this play is Melbourne and the performance is dense with references to places, people and things that only Melburnians would know, including reverent references to the always looming presence of a Dan Andrews press conference.

There is also the blossoming love affair between rookie inspector Lily Dale, who does things ‘by the book’, and the hardened officer, Frank Ston, a veteran who follows his ‘tum tum’. These plot lines are interrupted by snippets of classic tropes familiar to public transport users – the dreaded buses replacing trains, the guy playing loud music, and the rude bus driver who refuses to stop – always punctuated by the unmistakable sound of the Law & Order SVU ‘dun dun’.

This is without a doubt one of the most absurd and ridiculous pieces of ensemble comedy out there. Slapstick, pastiche, parody dance routines, dripping with unlikely and farfetched puns played large. It is not enough that the puns are obvious and deliberately silly, they are delivered with dramatic pauses, sound effects and lighting to emphasise the absurdity. This is shameless unadulterated fun. It never lets up.

The rhythm and attack are relentless and it takes you by the throat on a hilarious tram ride which carries you away and doesn’t give you any time to think or breathe. The show works its way up to the final over-the-top, joyous dance medley of songs related to ‘touching on’, carrying the audience who, by this stage, are clapping along and hooting, mesmerised by the energy of the unbridled enjoyment of the performers. It’s a rollicking ride from Flinders Street to the end of whatever train and tram line you’re on. A show by Melburnians for Melburnians, it knows its audience and gives them everything they want.