Looking for the light in the dark depths of a flooded cavern.
Dr Diana Carroll 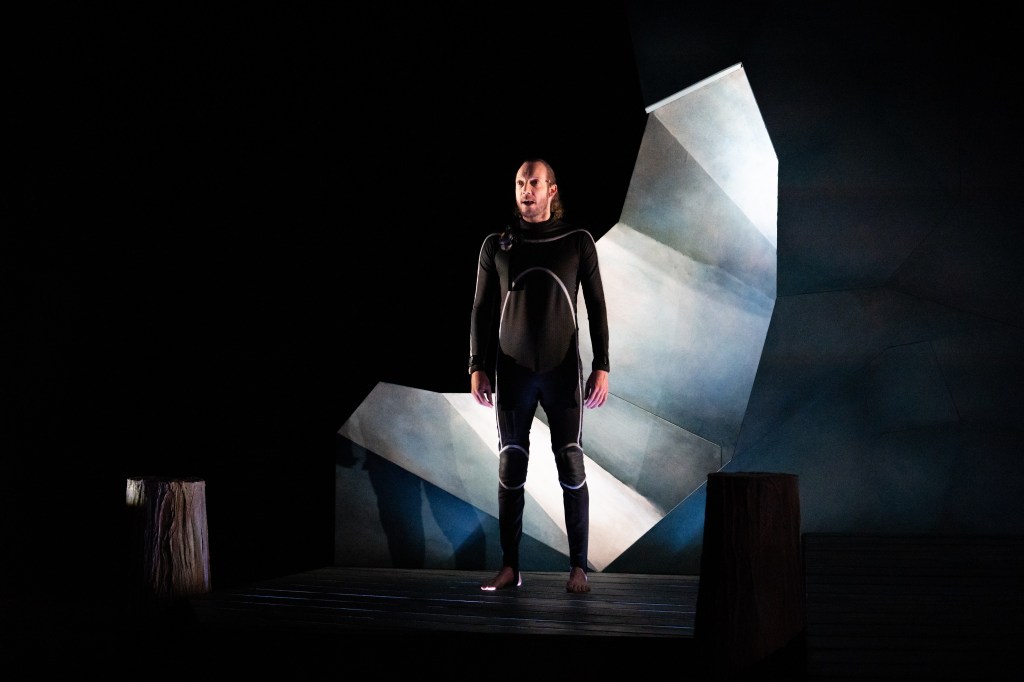 ‘In reality, Clay is a man facing his own mortality.’ Photo by Matt Byrne.

The new work by Australian playwright Caleb Lewis had its world premiere last week in the Space Theatre at the Adelaide Festival Centre. Now living in Queensland, Lewis still calls Adelaide home and clearly had many friends and family in the opening night audience. The same is true of Nathan O’Keefe, a very popular local actor who is perfectly cast as the star of this one-man-show.

On one level, Cathedral is about deep-water diving and all the thrills and dangers that involves. Lewis is a skilled diver and has spent time in and around the diving community. ‘I think I’m the only Australian playwright also qualified in underwater helicopter escape!’ he says in the notes. The play opens with the words ‘the first sensation is floating…’

O’Keefe is on stage for the whole 85 minutes as Clay, a determined and experienced deep-water diver. He is dressed only in a wetsuit, and the action all takes place deep underwater and in his head. Light and sound are used to great effect throughout to create the eerie emptiness and crushing claustrophobia of this underwater world. As Clay says, ‘ down there, you’re just a tadpole…’

O’Keefe holds our attention unfailingly throughout, a big ask in a one-man show, though there were a few moments where I felt that a little more nuance, a gentler touch, would perhaps strengthen our emotional connection to his character.

In reality, Clay is a man facing his own mortality. He’s deep underwater in South Australia’s Piccaninnie Ponds on the Limestone Coast, a diving spot famous the world over for its crystal-clear waters, yawning chasms, and the towering underwater ‘cathedral’ flooded with godlight.

As Clay experiences the horrors of depth intoxication, he relives numerous intense emotional moments from his past. He is haunted by the loss of his mother when he was young, and the death at birth of his twin brother. Other relationships, other loves, other places and times are revisited. These memories are floating by, rather than flashing by, and that gives the play its beating heart. This is very much a meditation on love and loss, on grief, on facing the past, and accepting what is and not what might have been. As Clay says ruefully, ‘always kiss the one you love’.

Even though it is a solo show, it is not strictly a monologue. Key characters from Clay’s past are given life through recorded voice-overs. This is my one major criticism of the work. These characters would have more impact if they were played on stage rather than simply presented as voices and memories.

Nonetheless Lewis and O’Keefe have together created something rather special that is enhanced by the talented creative team. The tight staging, clever lighting, and other-worldly soundscape ensure our attention is fully focused and add significantly to the overall impact of the play.

It is fitting that in this, the 50th anniversary year of State Theatre SA, they should focus on local talent and producing new works such as Cathedral.

Cathedral will be performed at Space Theatre until 21 May 2022, then tours regional SA.