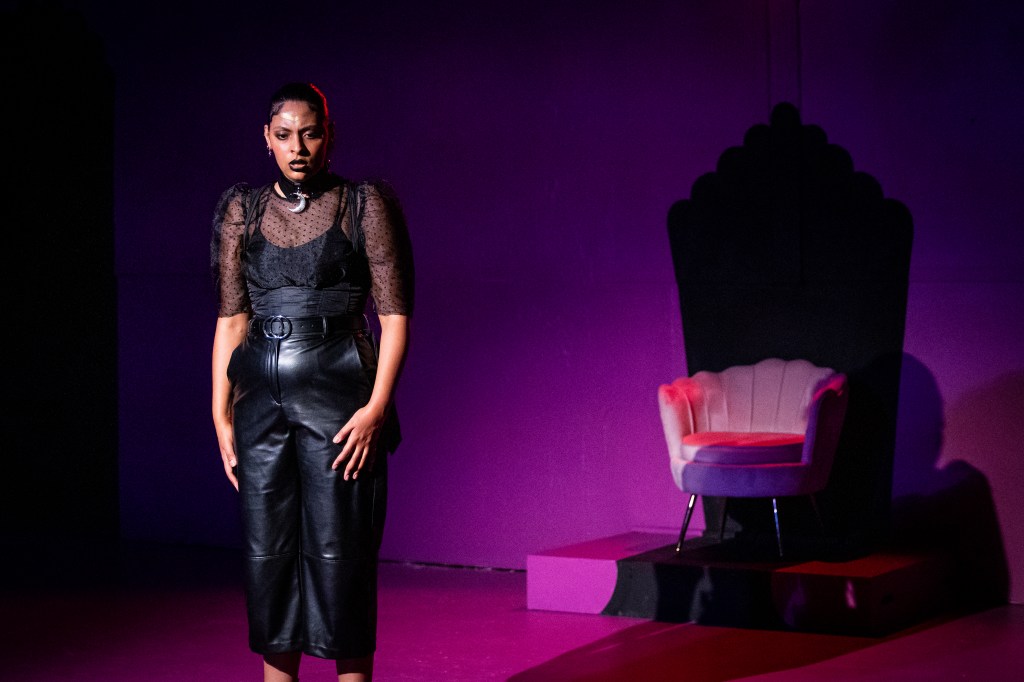 ‘Guaranteed to inspire lengthy post-show analysis and discussion among audience members, this is a production that demands engaged participation both during the performance and long after it ends.’ Photo of Kidaan Zelleke by Oliver Marshall (Against The Grain )

Hamlet in the Other Room is the ambitious debut production from the newly minted, Adelaide-based Good Company Theatre Collective. The show is set on the closing night of an all-female production of Hamlet, an occasion which has some of the cast itching to shake up Shakespeare’s most revered play. Performed at Rumpus Theatre, this is an immersive theatre experience, with audience members given the choice of watching from the actors’ dressing room, in which a backstage debate simmers away about the best way to make a statement, or the main theatre, where the performance of Hamlet becomes increasingly disordered.

As viewers we have the freedom to move between the rooms as often (or as seldom) as we like. It’s an exciting concept, if a little stressful in practice, since raised voices from the opposite room are always tantalisingly within earshot, reminding us that we’re missing something. What it does mean is that everyone is absolutely engaged, listening out for clues as to what might happen next, and enjoying the satisfaction of catching something whispered in the dressing room come to fruition later on stage. Strong performances across the board also contribute to keeping our interest and attention.

The backstage conversations are a thought-provoking – and funny – exploration of what it means to reimagine Shakespeare for a modern audience. If in Hamlet, for instance, Ophelia is treated poorly because she lacks agency in a patriarchal society, does an all-female cast erase the opportunity for a discussion of gendered oppression? It becomes clear that subverting Ophelia’s fate is a key focus of the disruptive efforts of the actors, who argue back and forth about the best way to achieve this. When she’s told to get to a nunnery, someone suggests, should she instead stand up to them all and announce that she’s running away – perhaps to Amsterdam to have some fun, and maybe study something to do with flowers?

After a promising beginning that manages to weave together subtle commentary on issues of gender and performance, insights into the characters of the actors backstage, and an engaging production of Hamlet itself, it feels like the show is building up to something explosive. But soon after Evie Leonard, playing Ophelia, breaks into a climactic speech to her fellow cast members on stage, this reimagining of Hamlet switches (seemingly with little backstage discussion) to a choreographed sequence of movement and spoken word. While the vocal performances here are eerily beautiful, it is a somewhat disconnected, slightly mystifying conclusion to what had been an intricate and eloquent examination of the play.

Guaranteed to inspire lengthy post-show analysis and discussion among audience members, this is a production that demands engaged participation both during the performance and long after it ends. Since everyone’s experience of the show will be different, it is the perfect vehicle to explore issues of interpretation and what it means to reimagine and wrestle with something familiar and revered.