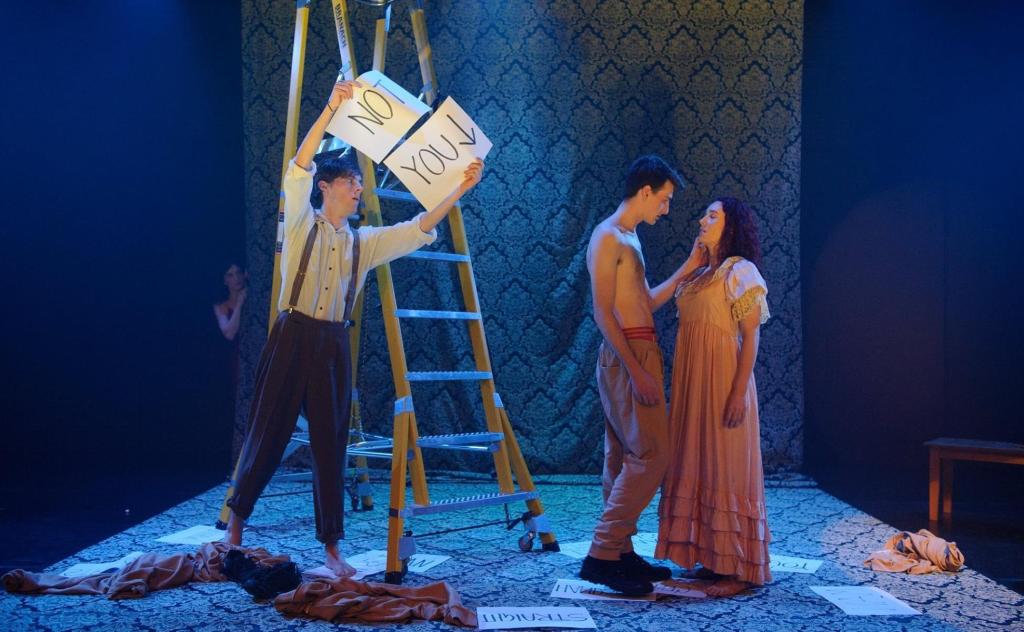 Presented as part of Love Fest, La Mama’s mini-festival of performance, Grand Gesture by The People (Katrina Cornwell and Morgan Rose, the team responsible for The Bachelor s17e05 and A Disorganised Zoom Reading of the Script from Contagion) robustly satirises the romantic narrative.

Grand Gesture is a playful romp of a show dealing with serious themes, namely how women are groomed by popular culture to respond positively to being treated badly by men, to suffer abuse and give up whatever agency they may have to be in service to men, all in the name of love and romance.

We may superficially understand the conventions of the rom-com, where men are expected to be dynamic and active and women pretty and passive, but what do we collude in by accepting these conventions? How are our lives affected by the falling in love and living happily ever after myth? And who, according to these cultural offerings, is entitled to ‘love’? Answer: the white, the young, the slender, nubile, conventionally physically attractive, and the resolutely heterosexual.

‘Grand Gesture is a playful romp of a show dealing with serious themes, namely how women are groomed by popular culture to respond positively to being treated badly by men.’

I was shocked by the beginning of the film La La Land when I watched it for the first time recently, saddened by how Mia (Emma Stone) pursues this guy (Ryan Gosling) who’s been so rude towards her! It’s justified according to the film’s narrative, partly because he’s an unsung artist. La La Land was written by a fella and it shows. Grand Gesture takes the first few scenes of this and other popular and successful films, shows and books and reveals what they’re really all about by embodying the subtext and messages therein using various theatrical devices, e.g., holding up signs undercutting the proceedings and labelling the characters (Creative Genius, Muse, Man, Woman, You) or what’s going on, gestures which also serve to highlight the formulaic nature of the rom-com genre.

The set is simple – a big swathe of fabric or wallpaper patterned in an old-fashioned formal repeating motif extends down the back wall and onto the stage; it makes you think of things being ‘papered over’. Props such as a couch or stools are carried on and off as needed, i.e., we see the scenes being set. The actors in are beige sweatpants and baggy tops reminiscent of prison gear. The Woman is reduced to a mannequin, literally, her body parts used in pleasure. The use of simple visual metaphors such as these is amusing and pleasing.

Grand Gesture deftly unpacks the cultural construct of romance, the performance of love. We are all bound to narratives and we will make them work in order to see ourselves as worthy of romantic love, since getting a man is perceived as the most powerful culturally defined marker of female self-worth. Women are set up to admire men of power and influence. There is a nod to how patriarchal stereotypes of the hero damage the self-esteem of the ordinary man. ‘You make me feel worthless,’ one male character tells the leading man.

Text comes from a number of films and the book 50 Shades of Grey. We witness the chilling finale of Casablanca where Ilsa is handed over by Rick to her rightful man, her husband, the one who owns her. Moments from Sex and the City touch on how women navigate transactional sex: ‘Getting ahead by giving head’. The movie Titanic features heavily, of course, and the film Twilight where Bella will love Edward even though he says he might kill her.

‘Grand Gesture deftly unpacks the cultural construct of romance, the performance of love.’

Grand Gesture could do with more pizzaz on stage. At times the understating playing feels flat – matter of factness could be contrasted with some more heightened performances, especially when it comes to the recreation of actual movies. The show overall could look at varying the range of performance styles. The other thing is, and I say this every time, the acoustics of the La Mama Courthouse are so bad that voices sound muffled – actors really have to make a point of projecting in this space to be heard by everyone.

‘There is no ending’ says one of the characters and this work makes a point of not finishing properly, the business on stage is unresolved and the performers amble off at the end after everyone’s woken up from the party, and mundane life takes over, including cleaning up the mess left over from a night of booze, drugs and food. Ordinary life, not glamorous, not romantic or miraculous, goes on.

Grand Gesture is an innovative and original work for stage, full of surprises and is funny. And a light-hearted take on an insidious and ultimately dangerous cultural paradigm. Let’s hope it gets a rerun.