A sassy musical that looks into the heart of being a boyband music fan.
Anita Sanders 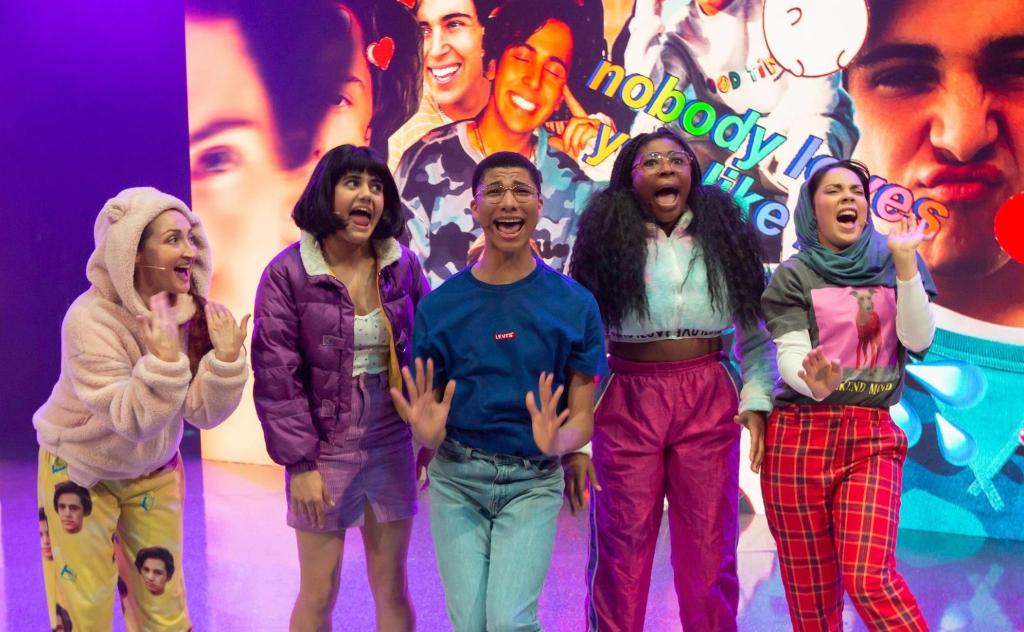 Fangirls, a sassy musical that looks into the heart of being a boyband music fan through the eyes of a fourteen-year-old girl, Edna (Karis Oka). Through empowering and bold pop tunes, a greater message unfurls around Edna – about her search for connection and friendship in real life, and getting lost in the boyband, True Connection instead.

The musical never takes itself too seriously and plays on stereotypes making a funny and heartfelt show. The only let down in this production comes from underdeveloped characters.

In Edna’s pursuit to meet the lead singer, Harry (AYDAN) in True Connection, she must make some bold choices that require her to be brave and break the law. However, Edna isn’t set up to be desperate enough to take these risks and so her actions make sense to the plot but not her character. The musical’s sassy and over-dramatic style manages to mask this enough to make the ride enjoyable. However, it derails when it becomes apparent that the musical has missed Edna’s learnings.

‘The music and choreography are styled like a stereotypical teenage girl’s bedroom party – daggy moves, some brilliantly choreographed moments and plenty of pop tunes.’

One of the final songs is about how it is brave to love but braver to accept you’re enough as you are, but really Edna has actually learned about connecting with her community, friends and family. The final song can be linked to Edna’s two quirky friends who are worried about their appearance and getting a boyfriend. However, the song’s introduction and placement in the musical makes it seem that it is meant to be more about Edna.

The musical touches on teenagers worrying about their appearance as the boyband’s music focuses heavily on girls being pretty. Sending the message out that words are powerful and it matters how we use them. This message is delivered via Edna’s friend’s experiences, however to reach this idea they radically and suddenly transform their mindset. It feels convenient instead of empowering. However, it is easy to overlook with these characters’ enthusiastic energy.

The music and choreography are styled like a stereotypical teenage girl’s bedroom party – daggy moves, some brilliantly choreographed moments and plenty of pop tunes. It’s exactly what the musical needs and transforms the stage into the teenage mind.

The songs are mostly uplifting and feisty, but writer and composer, Yve Blake, has balanced in some beautiful reflective tracks. The choreography often draws the whole cast to the stage and emphasises the community surrounding True Connection. It shows that the creative team have had some deep discussion on how the elements of the musical can represent the greater themes. It is all the stronger for it.

‘Fangirls is a supercharged musical concert that digs deep into the culture surrounding boybands and their effect on young people.’

The set and lighting design blend effectively together to maintain the mood of a fun pop concert. The set is deceptively simple, mostly empty with four screens at the back. The screens are used to convert the space by displaying True Connection’s logo for the concert, using simple animation that react to the action on stage for the fan fiction section and a video collage for the fans chatting and singing along. It’s a clever mechanism that reinforce the drama and themes.

The lighting complements the set by matching the tone and drawing inspiration from concert style lighting designs. It serves as great way to sustain a link to the overarching pop music themes. Unfortunately, the set is dragged down by the clunky removal of set pieces. At one point, Edna’s friend carries out a gym bench at the end of a scene where they have been fighting. It reduces the impact of the moment and distracts from the story.

Fangirls is a supercharged musical concert that digs deep into the culture surrounding boybands and their effect on young people. Humour is ever present as the production never takes itself too seriously. The creative team have made strong choices, ensuring lighting, set and choreography all link to the musical’s themes, making it a strong sensory experience. Its only struggle is justifying the characters choices as they are often sudden and have limited explanation, but the fast dramatic pace can make this easy to overlook.