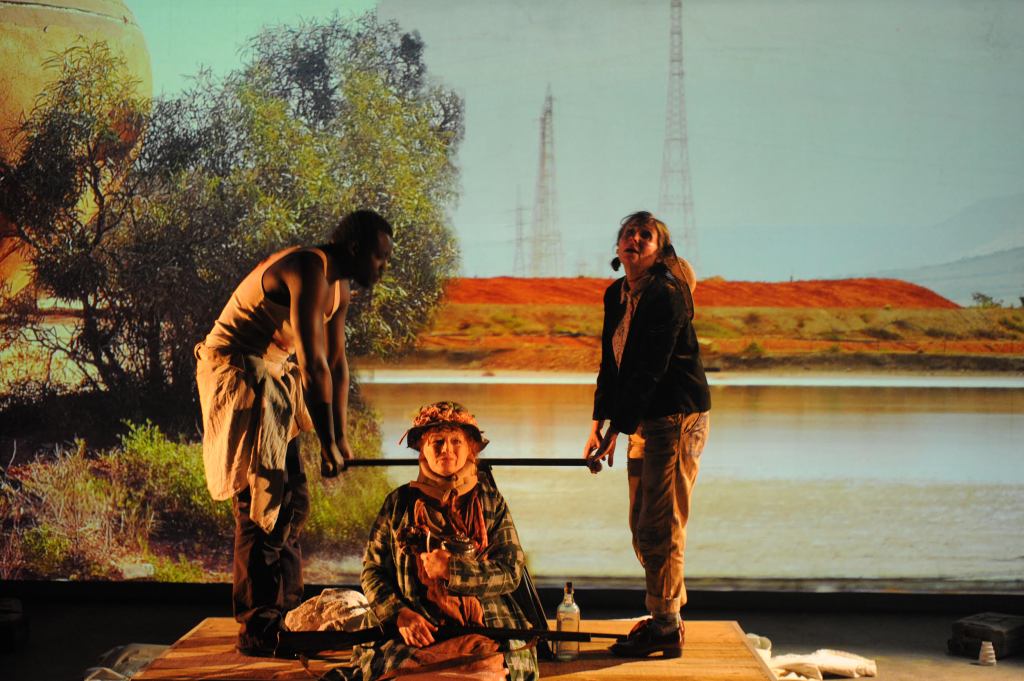 ‘The play is performed against a backdrop of stunning works by renowned landscape photographer Alex Frayne.’ Photo supplied.

The issue of climate change looms large over all of us and Dry by Catherine Fitzgerald offers a darkly comedic look at what kind of life could await us if we don’t take action.

Opening night of the play’s run at Port Adelaide’s historic Hart’s Mill sees the performance begin with a sparse set consisting of a table, chairs and a tent.

Onto the stage come two warring sisters. The sisters have opted to stay in an outback town where the water supply has been turned off and most of its residents rounded up to head into the capital. From the opening scene, it is obvious the hardships they are each enduring.

As the town’s last inhabitants, the battle to find food and water is relentless and even an old can of peaches is manna from heaven.

The two female leads have a natural chemistry on stage and bounce off each other well, particularly in their humour. But their characters are also involved in a fierce battle of wills, and past grudges are brought back as they rage both at each other and at the elements. Adding to their misery is the ever-present threat of snake attack from the reptiles that are seemingly the only other residents of the town.

An ongoing argument is whether the two made the right choice to remain in their hometown, battling the dry and snakes, or whether they should have headed with the other residents to the Capital. The answer to this question unfolds as a male intruder enters their home…

The play is performed against a backdrop of stunning works by renowned landscape photographer Alex Frayne. The images offer a fascinating glimpse of outback life, which can sometimes look apocalyptic, particularly in abandoned areas. The photography almost becomes a fourth performer in the play, and offers the audience a guessing game of where the images were taken.

Dry offers a great night out at the theatre, with strong performances, tackling of hard-hitting issues and a few giggles to offset the play’s serious themes.

Dry will be performed until Saturday 20 November 2021.