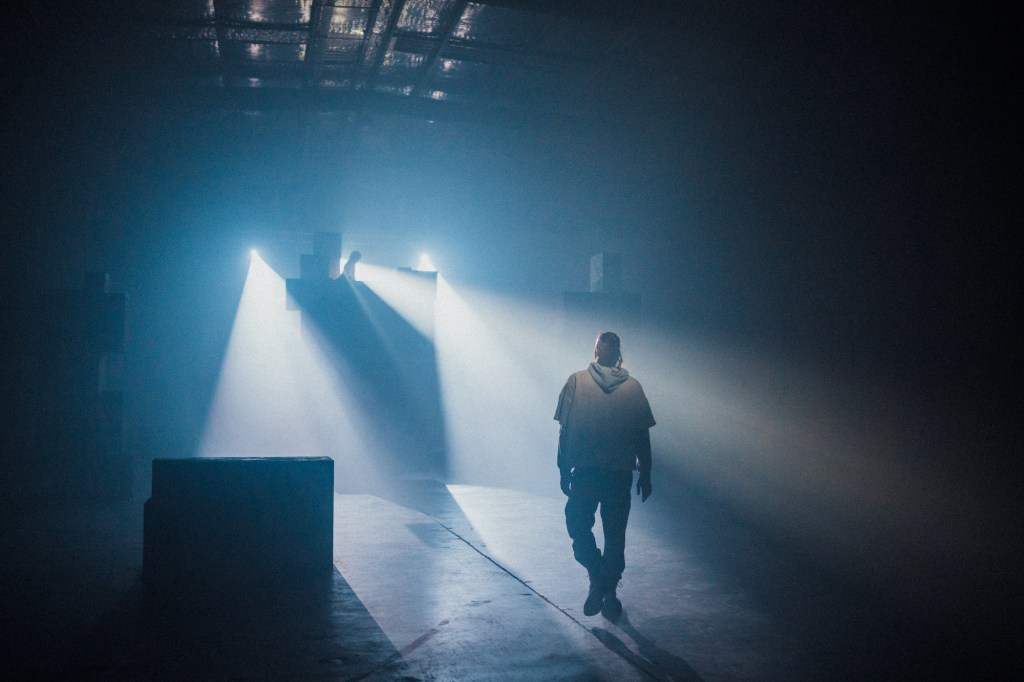 ‘MindCon is a contemporary fusion of visual, auditory, and kinesthetic elements…’ Image by Matsu Photography.

Western Australia’s Co3 Contemporary Dance has supported the 2021 launch of the Mitch Harvey Company through the commission of Harvey’s contemporary dance work, MindCon. Harvey is the inaugural recipient of Co3’s In.Residence (part of the Perth company’s Pathway Program) and is the director, choreographer and performer of the production.

MindCon performances premiered in the European Foods Warehouse in Northbridge, WA. Multi-disciplinary artist Jackson Harvey takes advantage of the cavernous warehouse space with an austere set on sprawling concrete floor. Grey-stained blocks are constructed as though they are derelict buildings. The wreck of a car sits abandoned in a back corner of the warehouse. Program notes describe the setting as ‘a futuristic dystopian world where lines blur between the observer and the performer’. Yet, an area for performance is created through semi-circular placement of blocks with cushions for seating and with the largest tower forming a backdrop to three shorter constructions erect in the centre of the warehouse.

The space is dimly lit, and audience members appear relaxed as they move around the perimeter to easily determine front of stage. Voices echo in the uncrowded room, hazy with smoke; the audience embracing the safety of dim blue lights, shadows, and haze.

Composer Louis Frere-Harvey has created an energised score which begins humbly. For the first 12 or so minutes, rumbling background sounds roll into a sweeping percussive soundscape: the music a passive background to the dominant exchange of patrons’ voices in conversation. As the haze of smoke builds, lights dim to sudden blackout and the volume of music dramatically increases as Mitch Harvey walks into centre stage to take up a position on the concrete floor. A spotlight tracks stage left to stage right before settling on Harvey. He is dressed in black pants (with knee pads for safe practice), black boots and a grey hoodie over a cut-off T-shirt: nondescript colours to complement the set design.

An unhurried series of blackouts give Harvey the opportunity to walk to different locations on set to strike a held pose. Each time, music echoes and vibrates and additional follow spots search and locate Harvey, then hold and release.

Harvey favours a movement style that is sustained, unrushed and controlled: the body a platform for engagement with auditory and visual elements in a desolate environment. His height and strength are used to affect presence in the space. Pedestrian gesture and repetition of movement is responsive to an electronic soundscape.

Harvey seeks to command the arena, moving through scattered floor patterns, interacting with impassive structures, and at times dominating the car and smaller blocks by climbing to stand on a higher surface. He favours isolation of body parts, cupping of hands, moments of stillness followed by running, and the slow rotation of his torso following the high release of his thoracic spine as arms lengthen and arc through the space above his head, thrown back with the bend of his lumbar spine. His movement vocabulary is comfortable, accessible, and executed with ease.

Némo Gandossini-Poirier’s expert lighting design directs the audience gaze to the performer, the blocks, or the spaces between, as follow spots cast lines of light through and across surroundings. The lighting design partners with musical composition to evoke corporeal forms: the beat of sounds reverberating in observers’ bodies looping the staged area. The buzz of strobe lights and sweep of follow spots – sometimes solo, other times multiple – rove as a conversational exchange with the dancer’s movement.

MindCon culminates with the boom of drumbeats as Louis Frere-Harvey appears on top of the largest tower. Harvey turns to face the figure and walks slowly from downstage towards the tower, establishing eye contact. Frere-Harvey raises arms holding drumsticks and begins a vibrant syncopated dance as his body moves in rhythmic tempo, inviting Harvey to respond in kind. Movement and music escalate, enhanced through lyrical lighting, until a series of drumbeats are embodied in the syncopated steps of the dancer, staggering backwards, step-by-step, towards the tower.

In the past few decades, contemporary dance-making has enthusiastically embraced collaborations with other artists and artforms through multi-disciplinary explorations. Site-specific or site-responsive dance work has brought audiences to new locations to respond to dance made and performed outside a traditional proscenium theatre. MindCon is a contemporary fusion of visual, auditory, and kinesthetic elements created through interdisciplinary devising with evident joy in the making.

MindCon was performed from 2-6 November 2021