An interactive social drama that posits existential questions about fate and free will.
Lucinda Coleman 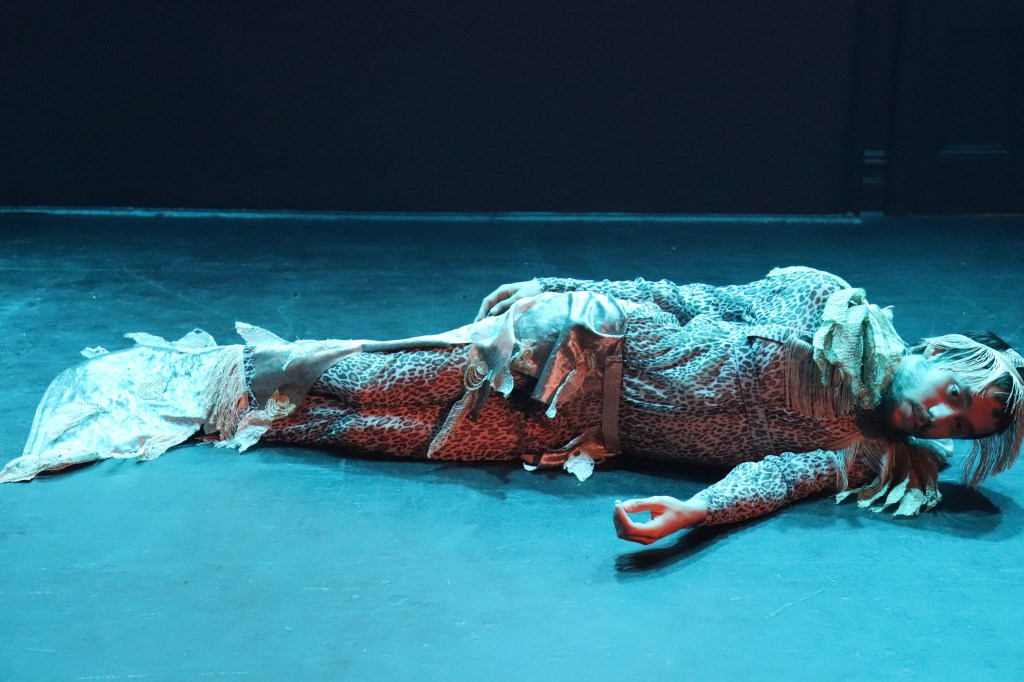 Conversations with a Fish is an invitation to consider our responsibilities for the choices we make as members of a shared society. Photo credit: Helah Milroy

Palyku woman and writer, Helah Kristy Milroy, presents philosophical musings in theatrical form in her play, Conversations with a Fish. Using the fish as a metaphor for the vulnerable among us, Milroy creates a series of scenarios to draw attention to power imbalances, social injustices, and systemic prejudices prevalent in our contemporary culture; disrupting each narrative to directly asks viewers to take responsibility for outcomes within scenes.

The play is presented in five short acts. At the end of each act, house lights throw focus to the audience as the actors disrupt the fourth wall and speak directly to seated patrons. Performers ask audience members to raise their hands to vote for one of two options to determine a resolution for a moral dilemma played out between that of fish and humans.

The Blue Room Theatre is small, sparse; the work staged is raw, direct, unflinching social commentary. As audiences walk into the space they are forced to navigate a figure lying centre stage: a washed-up human-sized ‘fish’ amidst seaside debris, played convincingly by Gabriel Critti-Schanars; his mouth opening and closing as his eyes observe patrons entering the room. Footage of a beachscape rolls across a screen on the back wall. Cellist, Camille Lalanne, sits passively in a corner, at times observer, participant, or musical collaborator. The soundscape, created by D’Abrande Ngoka and  David Whyatt, assists with creating fish worlds within human realms, as do the quirky and creative costumes designed by Milroy.

Act I ‘Psychopomp’ begins with two people discovering the hapless fish on the beach. The young man, Orphan, decides that ‘this fish is food’. His companion, Girl, wants to rescue the stranded fish. There is existential wrestling as the humans disagree on what to do with their discovery; the comment, ‘We are human. You are a fish’, sees the fish responding by asking ‘Am I?’ When the fish stops breathing, Orphan wants to consume the remains, but the Girl wants to bury the creature. To resolve the dilemma, house lights illuminate raked seating, and the actors ask the audience to decide whether the fish is to be buried or eaten – by raising a hand to vote for the outcome. The actors count the raised hands, respond accordingly, and the scene ends with a blackout.

Each of the successive acts set up one fishy predicament after the other, and each concludes with the audience being asked to make a judgement on a particular matter. In Act II ‘Blackfish’, Goldy the goldfish, performed with remarkable focus by Jimi Fleming, sits centre stage, wide eyes staring at the audience, mouth opening and closing with rhythmic precision. The Narrator, Joey Vale, speaks as Goldy, commenting on the attention of Goldy’s owner; a repugnant Admiral played bravely by David Whyatt, who was a last-minute cast change. The Narrator reflects on the Admiral’s lecherous behaviour, sighing as she concedes, ‘a little fish like me should be happy to have a big man around’, though in despair, and desperate to escape the Admiral, adds, ‘But how can I leave? I was just a little fish’.

In Act III ‘Lost & Found’ audiences are reminded ‘Fish speak every day but no one listens’, and are challenged to vote as to whether the fish are living in a dream or simulation. A monologue about the nature of freedom is the focus of Act IV ‘Psychopomp Fish’ during which the Fish notes, ‘I am a prisoner. You are a prisoner too’.

The notions of freedom, free will, and moral responsibility come to a climax in the final Act V ‘Kingfish’ which is staged as a trial in a court of law. Kingfish is arrested and charged with treason, but defends himself, explaining ‘as a sovereign, it is my responsibility to speak’, claiming ‘all I did was to remind the Crown of my sovereign rights’. As the house lights flare once more, audience members become jury members and are asked to determine whether retribution or mercy be meted out in the courtroom drama.

As a theatrical work, the performance is meandering and musing; as a commentary, Conversations with a Fish is an invitation to consider our responsibilities for the choices we make as members of a shared society.