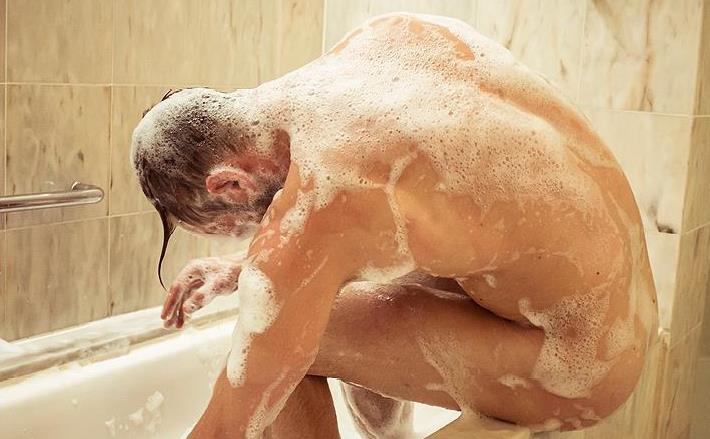 Biladurang 2.0 offers a compelling look at connection to culture, sexuality and self. Though hampered by a poor connection of the internet kind, Joel Bray gives an undeniably winning performance that transcends the show’s technical frustrations, and moves us through the screen.

The evening starts inauspiciously, stream frozen (our view: looking up at a hotel fire sprinkler). The audio plays crisply, but it’s uncertain if it’s part of the show or something’s gone wrong. The effect is immediately destabilising — in the group chat kindly provided by VCR Fest, we anxiously corroborate what we’re seeing onscreen. It turns out it’s not going as planned, so there’s a restart. Still, with every turn and every flicker there’s a sense of “Is what’s supposed to be happening?”, a slippery feeling that could almost be a strong creative decision.

Soon, though, we’re officially up and running, and when Bray gets to do his thing, he is incredibly captivating. Up close, we see every twitch and grimace as he melds dance with monologue, the first of several that make up the show. His body contorts itself with animalistic intent while he maintains casual chit chat — the effect is engrossing.

The way he interacts with the hotel room fare is even more inventive — a piece of bathrobe becomes a snake, a kit-kit becomes a skinned rat. Bray’s use of an impersonal space to augment his storytelling is original and entertaining. His shifting between distinct vocal registers is similarly spirited — from using naturalistic conversation to a more declarative mode — which helps to foster intimacy, and deliver lively story beats or a well-timed punchline.

The show is made up of these delightfully rendered vignettes that continue to explore identity as tied to culture and sexuality, specifically Bray’s experience as a gay  Wiradjuri man. Bray relives becomings and endings, transitions and uncertainties, before settling, not on certainty, but definitely something more certain that before.

Biladurang 2.0 is a powerful vehicle for Joel Bray, examining cultural and queer identity with charm and vigour.

The only dramatic quibble is that, once or twice, Bray screams in an act of all-consuming frustration and despair. These moments don’t feel quite earned in the context of show, which has pleasantly ambled along, but it is very relatable in the context of current life, and the disruptive effect of the show’s technical issues.

That said, it should be noted during the series of stops and starts, the VCR Fest audience was overwhelmingly positive, and had nothing but supportive words for the way the show had unfolded. It was heartening to see given the situation — and assurance that Bray’s work, while not presented as he might’ve liked, was still powerful and enjoyable.

In the original performance, audience members would physically join Bray. For 2.0, it’s a bit different. One audience member, Carley, attends in person and acts as an audience surrogate. Additionally, several audience members are dialled in on a video call, who we see onscreen occasionally, clad in white robes. Then, there’s the rest of us. The choice makes us conscious of our distance (why does Carley get to dance with Joel Bray and not us!?), but also gives us a way in. It feels like there’s a gradient of being there and not being there — and, somehow, the presence of these other audiences slide us closer to ‘being there’, and creates a stronger sense of connection to Bray.

Which is ultimately something that the show strives for, and largely achieves. And while the experience as a digital offering is a bit messy, it’s brimming with life. Despite the technical discomforts, Bray, as a performer and story teller, shines irrefutably bright.