This production of Midsummer is a playful and lighthearted jaunt in Melbourne’s Royal Botanic Gardens that offers an enjoyable night for all of the family.
Jenna Schroder 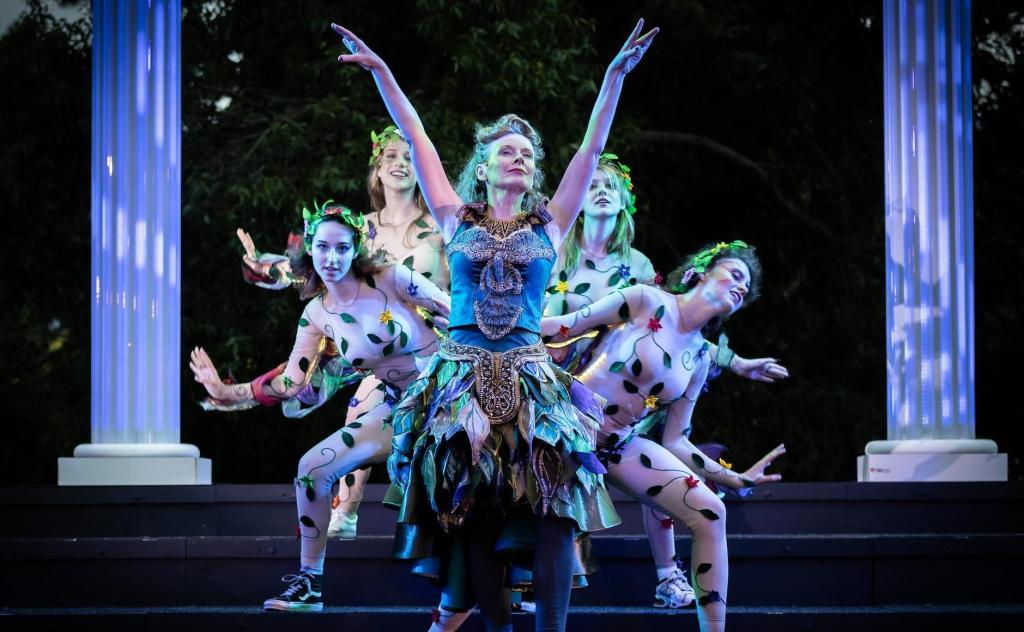 The Australian Shakespeare Company’s (ASC) production of their namesake’s A Midsummer Night’s Dream is performed under the stars at Melbourne’s Royal Botanic Gardens, and on this night, luckily, the sky was clear and the wind mild (though it does get chilly at nightfall so bring a coat!).

Even before the production starts there is a sense of occasion with revellers enjoying bountiful picnics. It’s clear many are familiar with the summer Shakespeare in the Gardens tradition. ASC then, has a strong history of providing Melbournians with experiential theatre rooted in fun and accessibility.

From the very first line this is made clear as the performer’s voices come through the outdoor space crisply and the usual pre show reminders, that now seem almost unfamiliar, are imbued with humour that immediately gets the audience onside wanting more.

Director Glenn Elston seems a master of ASC’s demographic as he deftly injects comedy in all the right places to keep the audience, a varied bunch, bubbling along attentively throughout the night. Of particular note is his direction of slapstick, with the cast expertly delivering physical gags.

ASC has a strong history of providing Melbournians with experiential theatre rooted in fun and accessibility.

Elston’s comedic instincts are supported greatly by Richard Piper in the role of Nick Bottom who works the crowd with indomitable stage presence, impeccable delivery and a bucketful of earnest charm. Piper’s jokes and quirks hit the high notes in part thanks to Kevin Hopkins who plays Bottom’s bemused theatre director, Peter Quince.

Anna Burgess as Helena also has the audience laughing with her stellar physicality creating humour within the seams of what could otherwise be boring exposition.

It is clear Elston is most comfortable directing for laughs as the theatre troupe’s scenes, which have no dramatic or narrative importance, are by far the most dynamic and seamless of the production.

Elston’s experience in making Shakespearean language and poetry accessible is indisputable as the cast delivers all essential information with interpretations that are easy to understand. Alison Whyte, who plays Titania and Hipolyta, is particularly skilful in this area. However in the more flowery moments of Shakespeare’s verses, meaning is often obfuscated.

Elston wrings as much audience participation as COVID-19 allows out of the script and this works well to keep the energy pumping, though the few dance breaks dotted throughout the production slow down the high paced story.

The staging is sparse but lighting provides some visual interest. Karla Erenbots’ costumes are either lush perfection or a tad costume-y with the majority sitting in the first category. Similarly, Paul Norton’s music at times wonderfully elevates the drama on stage but is often used unnecessarily and the sound comes off as superficial.

With tickets for children under 18 priced at an accessible $25, ASC places itself as the entry point for your child’s Shakespeare education. For everyone else, this production encapsulates the frivolity and lighthearted nature of A Midsummer Night’s Dream in a tried and true manner.