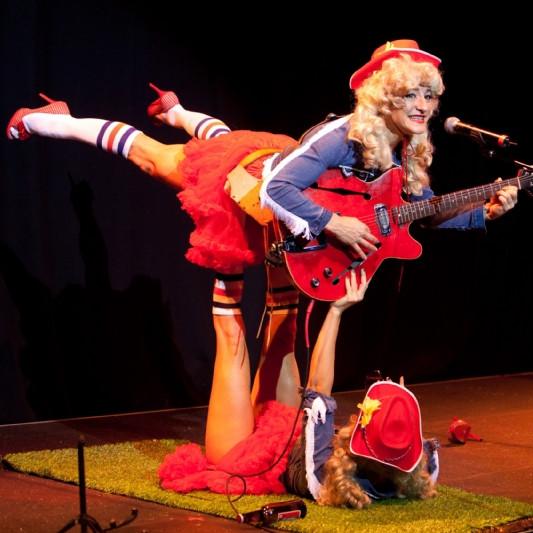 Wicked and winsome, The Wau Wau Sisters (US duo Adrienne Truscott and Tanya Gagne) have been leaving a trail of playfully ruffled feathers and delighted audiences around the country in recent months. Having already wowed audiences in Sydney, Perth and Adelaide to date, their tour now wends its way to Melbourne and a short season at The Famous Spiegel Garden, serving up a typically ‘Spiegelian’ blend of music, circus, burlesque and cabaret.

Next the duo slip into country & western costumes and strap on guitars for an acrobatic serenade, their witty script and equally entertaining adlibbing ensuring plenty of laughs. The duo’s comedic timing is excellent, as are their circus skills, though the latter don’t really come to the fore until later in the show, when willing audience members are hoisted aloft on Truscott and Gagne’s taut and muscular legs in an impressive display of acrobalancing.

With a surreal sensibility reminiscent of local duo The Town Bikes, The Wau Wau Sisters’ Last Supper is an accomplished show which nonetheless fell a little flat in spots, particularly during changeovers between acts, but the energy of the two performers soon lifted proceedings back to a more manic level.

A double trapeze act late in the piece was a particular highlight, showcasing the pair’s well honed athleticism and remarkable rapport; and their audience participation was engaging without ever being cruel.

By the time we reached the show’s bacchanalian climax – complete with red wine poured over the pair’s bare breasts and audience members dressed as satyrs devouring bunches of grapes – the repeated transgressions of religious and sexual taboos were growing perhaps a little thin, and an extended psychedelic interlude had definitely outstayed its welcome, but overall the show rose above such minor faults to genuinely entertain.

It might not quite live up to the hype, and if you have strong religious beliefs this is definitely not the show for you, but overall this was a Last Supper that definitely satisfied.

What the Other Critics said

Cameron Woodhead: “Given the louche charisma of the stand-up comedy, deploying it more evenly throughout the show might have saved a few dead moments later on.”