There is an important cautionary tale in this version of The Bacchae and it has to do with not losing sight of one’s self.
Suzie Gibson
[This is archived content and may not display in the originally intended format.] 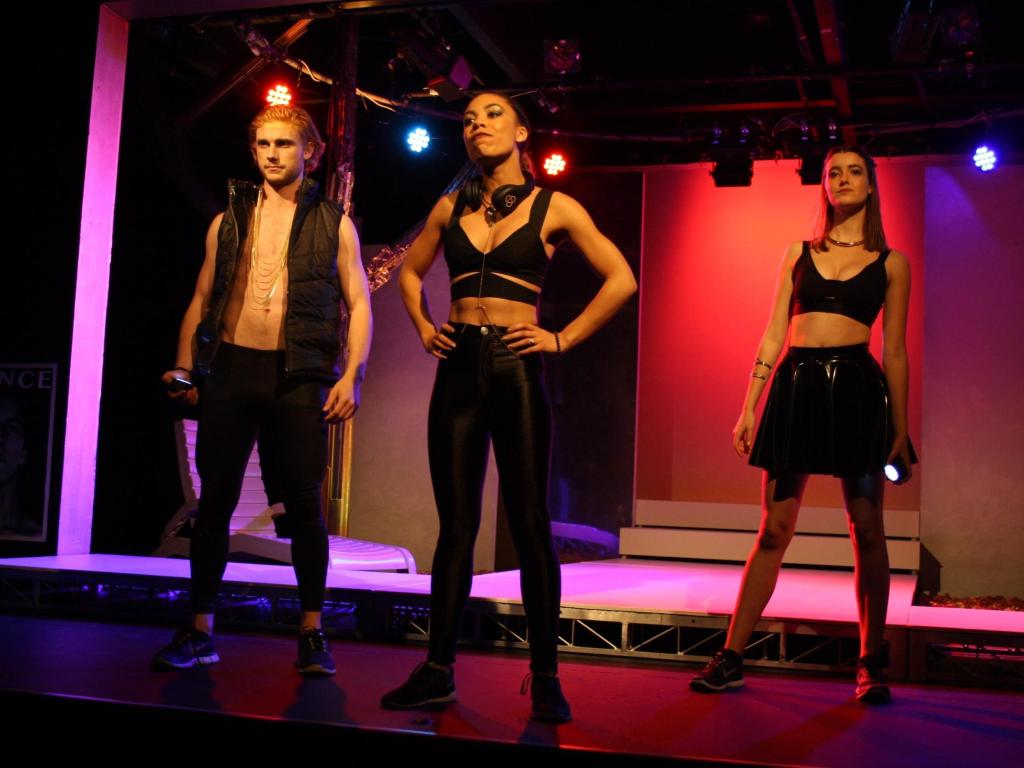 The Bacchae opens with a group of cool youths strutting their stuff on stage while taking selfies, laughing and enjoying each other’s company.  We gradually learn that these chilled-out, fit people are the Chorus of Euripides’ play.

Unlike orthodox productions of this ancient Greek drama, the Chorus in Adam Deusien’s version are central to the unfolding of events. For not only do they narrate and prime the audience for what is to come, they also provide us with neat props from pop culture and high fashion which remind us that we are not living in ancient times but in a world saturated with advertising images.

In fact Deusien’s re-interpretation of Euripides’ play provides us with an edgy take on tragedy where Dionysus, the god of wine, and the King of Thebes, Pentheus, struggle over the will to power whilst also engaging in Zoolander-style ‘Blue-Steel’ poses.

Dionysus’ debauchery is associated with a boundless narcissism that is enacted through catwalk antics and iPhone selfies. This theme is well visualised through careful stagecraft where placing numerous mirrors and reflecting surfaces all over the stage bounce images over the actors as well as into the audience. The experience of seeing itself is highlighted as we are invited to contemplate our own vanity.

Inventively again, the stage is organised like a runway. Actors appear on this catwalk/stage as if they are coat-hanger models exhibiting the most expensive designer gowns. The set design is also luxurious with painted golden leaves adorning the floor, evoking a bountiful, rich nature.

Warm lighting and funky music contribute to this world of excessive luxury and comfort. One would not be faulted for wanting to embrace such a pleasurable and comfortable existence. But there is a frightening side lurking beneath all of the glamour.

The underside of Dionysus’ excesses is that it fosters extreme violence. Such brutality is dramatically enacted through Pentheus’ shocking death where he is dismembered and scattered ​about the place. By the play’s end, the gold leaf floor is stained red. Gold quickly turns into blood.

Traditionally Pentheus is positioned as Dionysus’ foil but in this new production he comes across as another god of excess. He even turns into a narcissist once he mingles with the cool Chorus crowd, taking selfies and admiring his own looks.

The Bacchae themselves are beautiful creatures –  beings we aspire to look like. They invoke the gorgeous glossy photographs of high fashion magazines. The beauty of youth is very much on show in this play. Such beauty is accompanied by a rebellious passion that invites us all into a Dionysian thrall.

All of the cast and crew are third year theatre students studying at Charles Sturt University. This is an unusual production because it is developed out of a genuine collaboration between director Deusien and his enthusiastic crew of undergraduates. It is evident that the actors are still learning their craft and developing their confidence but there are some standouts, such as Tom Matthews’s hilarious Pentheus and Jessica Murphy’s grieving Agave.

The idea of aligning the god Dionysus with an unfettered narcissism is fresh and relevant. There is an important cautionary tale in this version of The Bacchae and it has to do with not losing sight of one’s self. If this means turning off one’s iPhone, Facebook, or Twitter then it just might be worth it if it fosters an interior life.

This is an accomplished, inventive and genre-bending production that deserves our attention. It also proves that regional towns and universities can produce experimental theatre.