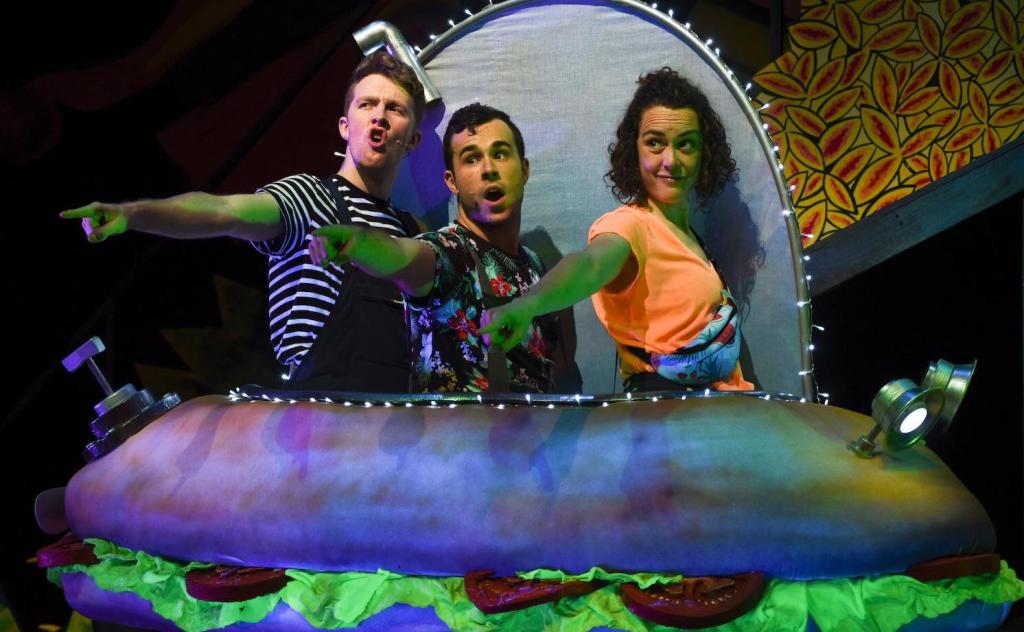 As you enter the Arts Centre Melbourne foyer, a giant foam ‘sandwich submarine’ sets up the fun atmosphere for The 91-Storey Treehouse, an adaptation of the seventh book in the popular Treehouse series by author Andy Griffiths and illustrator Terry Denton.

Staged by CDP Kids, the play is based on a book of the same name, where the characters parallel the authors: Andy (Samuel Welsh) and Terry (Teale Howie) are best friends and co-authors who own a multilevel treehouse, complete with a shark tank, desert island, whirlpool and many other fantastic imaginings. Their books are about what goes on in the treehouse.

In this adventure, their publisher, Mr Big Nose, asks them to babysit his three grandchildren while he goes to the opera. Both Mr Big Nose and his children are comedically played as life-sized puppets that are expertly thrown, bounced, slid and carried across the stage by actors and puppeteers.

Andy and Terry’s adventures are predicted by Madam Know-It-All, a mysterious turban-wearing fortune teller, played to sinister perfection by Samantha Young. As for the excitable overalls-wearing Terry, all he wants to do is push a big red button that Andy is convinced will destroy the world. When Mr Big Nose’s grandchildren disappear into the treehouse, Andy, Terry, and their neighbour Jill (Rebecca Rolle) are forced to chase after them. The three enthusiastic actors pursue the children through a giant whirlpool, a sandwich submarine, a desert island and the magical land of Barnia.

The script utilises the best bits of the book. Yet although heavily adapted, some parts of the show could nevertheless have been removed, with certain scenes stretching out longer than they should have. Towards the middle of the show, some of the little theatregoers were getting a bit restless.

The show is aimed at an audience over the age of six, and would certainly hit the mark with lower primary children. There are many special effects including a partially glow-in-the-dark and inflatable set. Paired with dances and lighting changes, this retains the attention of younger audience members. At various moments, children in the audience yelled out, cheered and encouraged the actors, which actors could have responded to more. There was no direct speech addressing the audience, although when Andy, Terry, and Jill needed help, there was plenty of it on offer from the stalls.

The 91-Storey Treehouse has a brightly coloured, cheerful playground-like set design perfect for the show, from the slide that the actors constantly used, to Madam Know-It-All’s fortune-telling chamber, lit with fairy lights. The show includes singing, though not enough to make it a musical. The strongest musical performances came in the form of the cunning Madam Know-It-All’s riddles, told to help Andy, Terry and Jill find their publisher’s grandchildren, and to predict the goings-on of the day.

Though the show was let down at times by the singing and dragged in some sections, overall, The 91-Storey Treehouse was a fun, engaging children’s show with an energetic cast that will appeal to a broad young audience.

Mali Hawke is a young theatre lover who lives in Melbourne’s west.