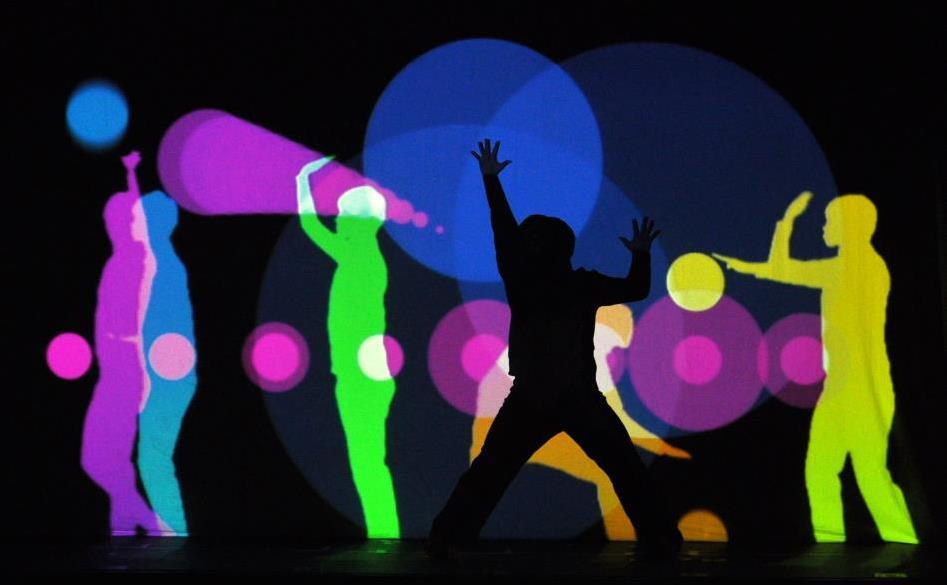 It’s amazing how much fun you can have with four young Japanese performers, an upbeat music track, and some astonishingly good visual effects. The four-man SIRO-A ensemble of Kawashima, Daiki, Yohei, and Yu-ki are on stage for the full 60-minutes of non-stop entertainment and are all talented dancers, mime artists, and acrobats. They’re also masters of the quick costume change and have a good repartee with the audience, even though their spoken English is limited.

The fun begins before the show even starts as the cast members mingle with the audience who have arrived early in the Playhouse. The cast trot around the audience inviting people to be recorded and photographed as they meow or woof into the microphone; others are invited up on stage to be photographed in action poses. Nobody knows how these will be used in the show, so my 8-year-old companion was beyond delighted to see himself later, woofing on the big screen alongside other audience members. The recordings had been quickly mixed together into a unique song track that was very funny. This was just one of the many clever ways the performers used audience involvement to create a sense of fun and friendship – it was just like being at a party with 600 of your closest friends.

Throughout the show, the choreography is tight and the way the performers interact with the computer generated video effects is very impressive. The routines depend on precision timing to be effective and this critic did not spot a single flaw.

The performers recreated scenes from many of your favourite movies, including Jaws, Sound of Music, and Star Wars, using hilarious digital technology. Even Alien and The Exorcist were made family-friendly with the Techno Circus touch. In another clever sequence, many of the world’s best-known brands, including Puma, Starbucks, and Google, were given a Techno Circus make-over with hysterical results. And there was a strong patriotic push for the 2020 Tokyo Olympics too.

Techno Circus is described as ‘a non-verbal techno-delic performance show for people of all ages and nationalities’ that fuses ‘high-tech and human’. This only goes part-way to describing an act that is so clever, so funny, and uses such amazing special effects. And it is suitable for all the family, which is sometimes a rare treat in theatre. Mr 8 declared it ‘spectacular’.

SIRO-A was apparently a Golden Buzzer Winning Act from America’s Got Talent, and it’s no surprise given their unique show. The OzAsia run has finished now, but if you get the chance to see them here or in their long-running show in Tokyo, be sure to snap up a ticket.