An visceral and evocative journey of unforgetting.
Robert Chuter
[This is archived content and may not display in the originally intended format.] 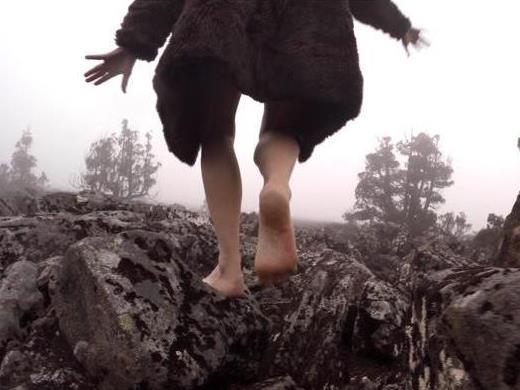 If there’s anyone to whom the old adage: ‘If you’re going to risk, risk big…’ were to be applied today, it is to the writer Grace Pundyk. For her harrowing first produced play, she hurls everything to the canvas – and it sticks beautifully, the result is an electrifying piece of immersive theatre, one of history and poetry that haunts and lingers long after the performance has ended.

I do not use the term ‘harrowing’ lightly. Drawing inspiration from three letters written by her grandmother (who perished in a Siberian work camp under the Soviet leader Joseph Stalin) and discovered in an old suitcase belonging to her 81 year-old father, Steppe is set directly after the Soviet invasion of Poland when thousands of Poles were shuttled off to the work camps, under the title ‘enemies of the state’.  We, the audience, follow the journey of young Kasia, a Polish woman in the prime of her life, who is forced into a cattle car and thus her journey begins across Siberia toward the gulag, where she knows she will meet her fate. We follow her every step taking in the claustrophobia, grief and paranoia along the way.

Pundyk’s glorious text is a ballet of words – poetic, emotional with splashes of humour and under the deft direction of The Impending Room’s Cathy Hunt, the result is dazzling and disturbingly visceral. Sharing the role of Kasia are three superb actresses: Laura Jane Turner, Nisha Joseph and Anna Kennedy, each partaking in a different facet of Kasia’s personality and consciousness allowing a multifaceted portrait of a woman desperate to survive. While each actress is wonderful, Turner is an absolute standout, she is particularly mesmerizing, never falling into hysterics but fighting to hold onto her last scraps of dignity. She is heartbreaking to watch, certainly a performer to look out for.

The technical and production aspects are fantastic, with Stuart Thorne’s atmospheric sound design highlighting the drama of the inevitable and Siobhain Geaney’s stark and beautiful lighting brings an unforgiving mood almost as cold as the Siberian winter itself. Cathy Hunt’s considered, controlled and imaginative direction succeed in not only replicating an important aspect of history, but resurrecting it to detail so believable it is far more sobering than any history lesson. This is clever theatrical experience that is all too rare: a stylistic performance in a site-specific location. After seeing many Fringe shows this year, this would have to be a highlight. Don’t miss it, highly recommended.

Steppe – A Journey of Unforgetting