Songs for the Fallen

A glittery and fabulous tribute to the original party girl and fabulous French Femme, Marie Duplessis.
Kyle Walmsley
[This is archived content and may not display in the originally intended format.] 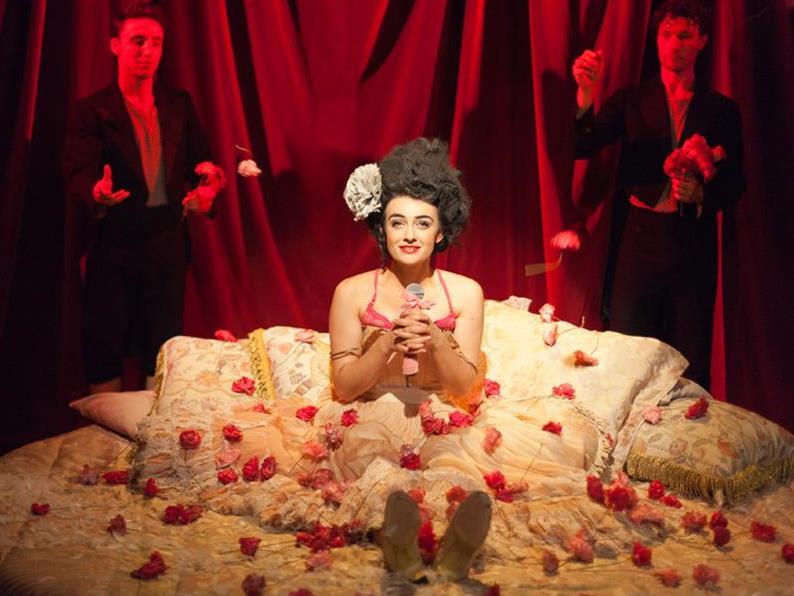 One part biography and nine parts questionable excuse for a party, Songs for the Fallen is a fast and furious tribute to perhaps the original party girl and French Fabulous Femme, Marie Duplassis.

Once again, the Famous Spiegeltent proves to be home to great talent and awkward seating arrangements (it can’t be emphasised too often, line up early for least obstructed viewing). Sheridan Harbridge’s well seasoned play is familiar to Sydney audiences from its Sydney debut a few years ago and has since toured near and far, picking up Best Musical at the New York Music Theatre Festival, and has now kindly returned to yet again live out Duplassis’ final days before us.

Harbridge, as creator and Marie, is one talented lady. She’s easy to watch and juggles comedian, songstress and actor as easily as Duplessis juggled her men. She hits the ground running from the start, and with the support of her comedic henchmen, Ben Gerrard and Garth Holcombe, they don’t let up till the final piece of glitter has fallen. Gerrard and Holcombe work well as a kind of begrudging but besotted pair to our central countess, slipping easily between manic characterizations of the men and women in Marie’s life and mind.

This work is well seasoned and it comes as no surprise that every moment is executed with comfortable and precise maximum impact. You don’t have time to blush in this non-stop cavalcade of cheeky raunch and clever wit.

The musical numbers are frequent and have a contemporary pop familiarity and a fitting vaudevillian size. Composer and Sound Designer Basil Hogios has done a bang up job in creating a score that is full of surprises and a good balance of live instrumentation with digital accompaniment. A shame though is that the full punch of the lyrics misses in what is sometimes a strain, and most times impossible, to make out the words in what I believe to be the acoustic limitations of the spiegeltent.

Harbridge is a comfortable performer with a strength in nuanced and comedic dialogue. There’s not a comedic stone unturned when it comes to exploring each moment of the ailing countess, doing her best to party right till the end. You’ll wish you had tuberculosis after watching this fun and frothy cabaret.

Songs for the Fallen​