BURNLEY OVAL: One of Australia's best-known traditional circuses, Silvers is full of all the glitz, glam and excitement you'd expect.
Melynda von Derksen 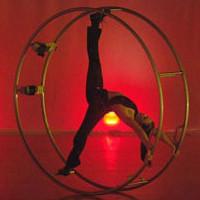 A traditional Big Top circus owned and operated by the Gasser family, Silvers is an extravaganza. They will entertain you with their daring, thrilling and high-energy acts, and will have you gasping with awe from the moment you sit down. And with MC Simon Tait at the helm, wowing the audience with his bevy of beautiful women and his amazing feats of illusion, you can be guaranteed the glitz, glam and excitement exuding from within this circus tent will follow you all the way home.

Gypsy Gomez and her amazing hula hoop act channelled Jennifer Lopez, and invited us into her own private disco complete with pumping music, a giant disco balance ball, sequin headphones and a stack of fluorescent hula hoops that resemble a giant slinky. With hula hoops seemingly coming out of nowhere, and being spun in every direction imaginable, this is one of the most high-powered hula acts I’ve seen to date.

Daredevil Phoenix Harrison runs for his life on the Wheel of Steel, a gigantic, hair-raising wheel of death, as it’s also called. With no lunge to guarantee his safety, this sky-high contraption literally has any acrobat running and spinning for their life.

Juggling clubs that look more like propeller blades, Ricardo is the fastest juggler I have ever seen. Not only is his precision almost perfect, his Latino style and sex appeal are truly irresistible.

NICA graduate Emma Avery performs a spectacular and elegant tight-wire act. Not only does she demonstrate her ability to balance to perfection, she walks across the wire wearing ballet points. Her most impressive feat, however, is placing a ladder on her tight wire and climbing it rung by rung. Don’t try this at home!

Emily Ryan, another NICA graduate, performs a sexy and seductive German Wheel act that has been slowed right down to the point where her body and the German Wheel are as one and the audience can see every curvaceous move that she makes. Meanwhile, the Globe of Death is a thrilling and dangerous act consisting of three motorcyclists all riding inside a 3 ½ metre diameter steel globe. The riders circumnavigate each other at high speeds, and one false move can literally cause serious injury or even death (hence the name). Add a beautiful girl to the mix and watch with bulging eyes as your heart almost stops!

With a great mixture of soundtracks for each act, moving lights and some crazy comedic clowning and audience interaction thrown in, this is one of the best circus shows you will ever see.

Melynda is a Melbourne based freelance photographer, arts manager and fashion stylist who enjoys creating her own projects and reinventing herself on a continual basis. Graduating from the Victorian College of the Arts in 1996 where she majored in technical production in theatre, she has worked as a lighting designer, stage manager and theatre all rounder for many of Melbourne's best known creative companies. Eager to expand on her professional career, in 2004 she undertook a post graduate degree in arts management at the University of Melbourne. Since then she has worked in the area of arts administration and has used her skills to coordinate many successful cabaret events around town. As well as being part of the La Mama family for almost a decade, she continues to stick her finger in every type of creative pie that life has to offer. She is currently researching and writing a photographic book based on the history of the Melbourne Punk scene (1977 - onwards), which she hopes will be published in the next few years.