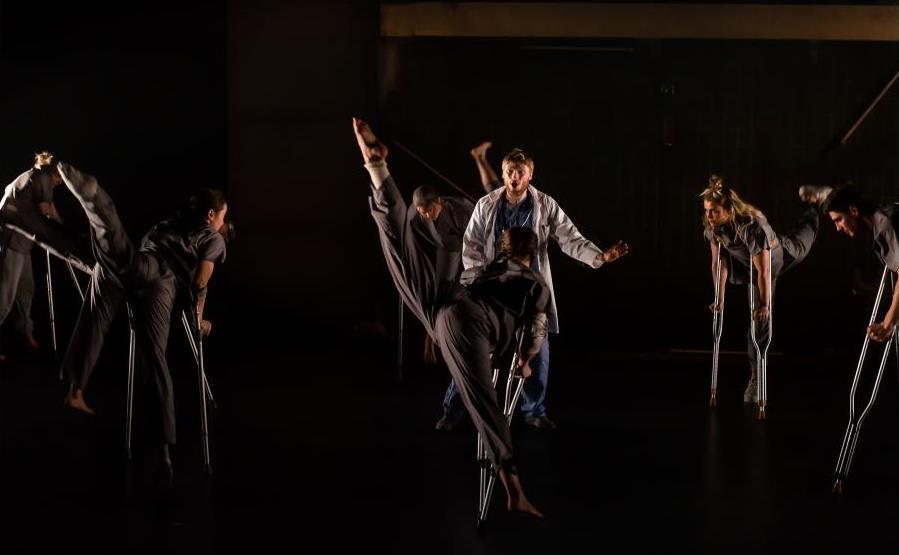 Sick makes clever use of props such as crutches. Photo: Kieran McNamara.

Sick presented by NICA’s Bachelor of Circus Arts third-year students is a slick, sophisticated and utterly human contemporary circus work set in a fictional hospital with scenes straight out of uncanny valley. Inspired by guest director Gavin Marshall’s own extended hospital stay after a career-pivoting injury, Sick uses the superhuman abilities of its performers to explore illness, physical frailty, hospital politics and other scenes one might find in a hospital – real or fictional.

The physical abilities of the performers are impressive, but equally impressive are the acting and physical theatre skills required to pull off this theatrical, conceptual work. Scenes of satire and slapstick humour depicting waiting rooms, the various dynamics between staff and patients, and other hospital hierarchies are presented in novel ways using the mediums of duo work, corde de lisse, and tumbling. To the credit of the performers and the choreographer, these scenes on stage will be immediately recognisable to anyone who’s been in a hospital – circus flourishes notwithstanding. There are other moments of humanity that tug at the heart, such as an old woman with memory loss reminiscing about a halcyon romance and the melancholy of her daughter whom she no longer recognises.

Other scenes are darker and more spectacular: dancing fluorescent bacteria heralded by a lithe hand-balancing lab scientist, an energetic group piece cleverly using crutches as props, and a haunting climax involving silks and movements out of horror films.

Stephanie Howe’s set and costume design is outstanding both aesthetically and functionally, with a versatile split-level backdrop and inventive touches such as a trapeze doubling as a fluorescent lamp and bandages doubling as aerial straps. Lighting design by Richard Vabre is effective across a range of scenes and palettes, from a representation of the fluorescent lighting in real hospitals, to sinister greens and steel blues and ending with peachy sunset hues. J David Franzke’s excellent sound design is key in getting the concept across, incorporating electronica, snippets of the conversations one might expect to hear in a hospital, and an eclectic soundtrack of songs.

Sick is far more than a graduation performance and on par with any world-class contemporary circus work owing to the dedicated, trained ensemble and a pitch-perfect creative team. It’s entertaining, astute in its social commentary, and utterly gripping from start to finish. Each of the performers in Sick display readiness for the professional stage in not just their honed physical skills but in their versatility and maturity as artists and performers.